Shinerama sheds light on the effects of cystic fibrosis 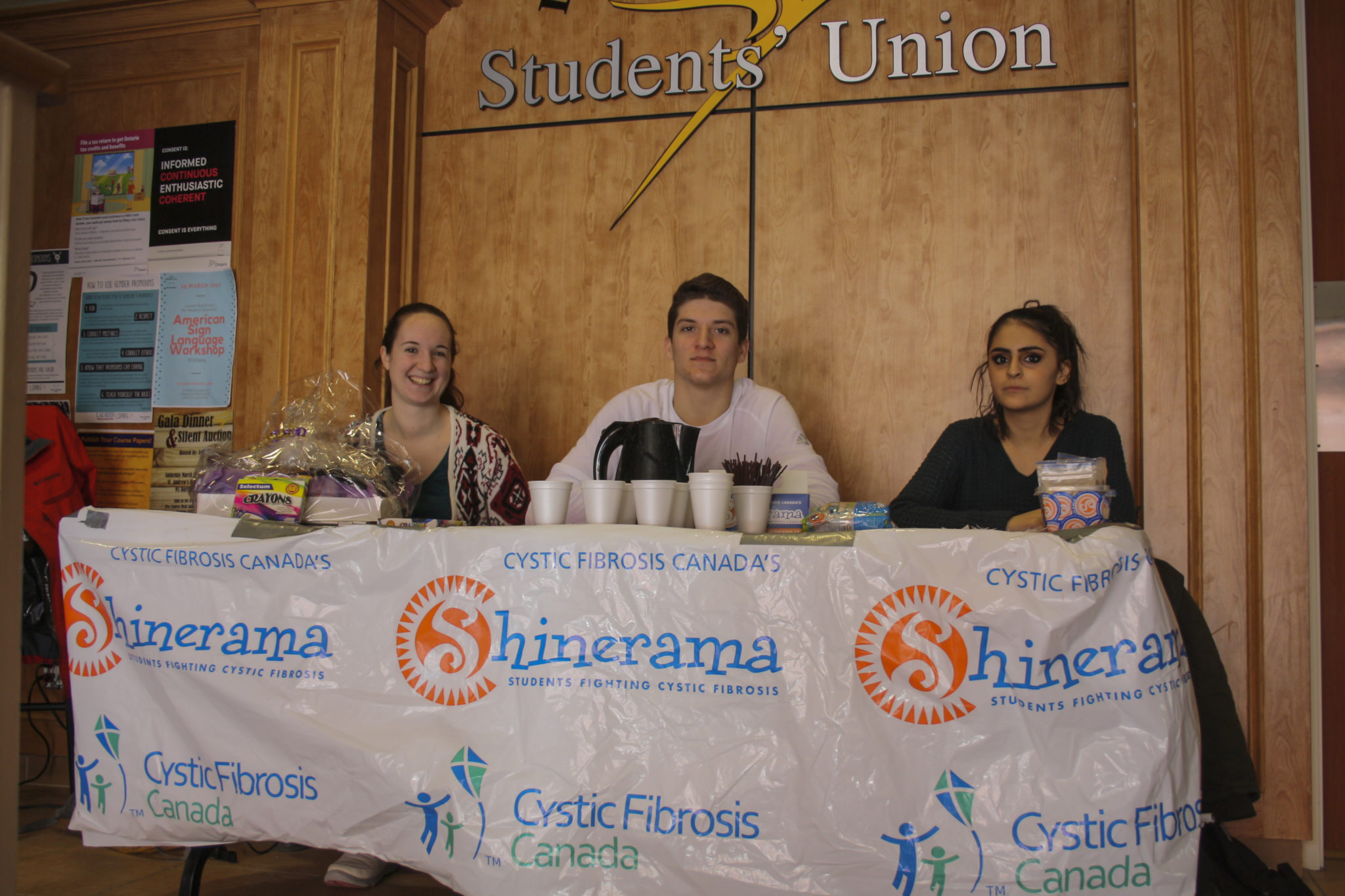 Shinerama put on a three-day event on the Laurier Brantford campus last week. 30 to 40 people showed up for events throughout the week to show their support those suffering with cystic fibrosis (CF).

The event took place from March 14 to March 16 in the lobbies of Odeon and RCW.

“[It was] more of an awareness campaign for Shinerama. What we did was three different events. The first one was you are my sunshine, so we had tons where people could write positive notes to those suffering with CF or to just their friends. We also did, the next day, some trivia about cystic fibrosis, and then our last day, we had this big poster we created, like a big pledge to end CF. People could put their handprints on there and they could sign [it],” said Natalie Rigato, president of Shinerama.

“Basically it was a big awareness campaign to bring more attention towards cystic fibrosis and the Shinerama club itself on campus and to let people know that we are still here and we are still excited and we are not going to give up,” said Rigato.

Cystic fibrosis is the most common fatal genetic disease in children and young adults in Canada. It mostly affects the digestive system and lungs. CF sufferers experience problems with digestion, sinus infections and malnourishment due to difficulty of absorbing nutrients. Cystic fibrosis can also cause individuals to cough up mucus due to constant lung infections and can even cause males to be infertile.

Many universities have clubs bringing awareness to cystic fibrosis as well as other genetic diseases, but Shinerama was founded at Wilfrid Laurier University and is a university-wide campaign, according to Rigato.

This year was the first year these events took place, though Rigato hopes to continue the tradition.

“We are hoping to make it an annual thing, and next year we are actually hoping to have a big gala at the end of it and have more speakers come in,” said Rigato.

One in 3,600 children in Canada suffer from CF. If both parents of a child are carriers of CF, they have a 25 per cent chance of having a child with CF. There is also a 50 per cent chance that the child will be a carrier.

Shinerama is trying to bring attention to cystic fibrosis through many events throughout the year. These events include a car wash during orientation week where all the incoming students wash cars for a day to raise money in hopes of finding a cure.

“At the beginning, they used to do shoe shines actually, before the car washes. They would make them shiny for Shinerama, but now they turned it towards cars and that’s been going on for years,” said Rigato.

The events that occurred last week had prizes to be won as well. The bookstore donated a hat, a sweater and a lanyard to the use hoping to encourage people to come out and support the on-campus club.

Rigato urges students to support Shinerama when they see them around campus. She wants to remind students that they are a full year club and they will be back during orientation week for their annual car wash.

To find out more about the club, check out their Facebook page, Shinerama – Laurier Brantford.