Seeing the positive amidst the Miss America controversy 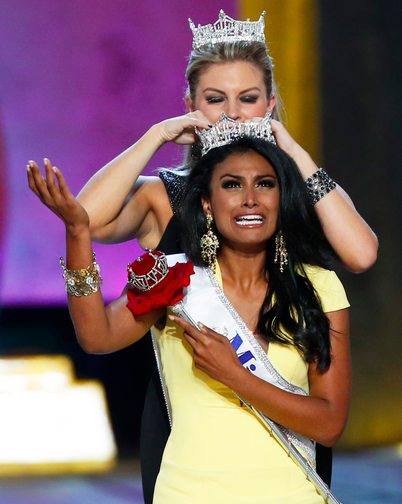 By now we have all heard that last Sunday, Nina Davuluri, an Indian-American woman, won the Miss America beauty pageant. The racist tweets that followed are still just as shocking if you are reading them for the tenth time or the first. It is unfortunate that what should be a celebrated moment of diversity and equality is instead marred by controversy and racism. But maybe all is not lost, and the good still outshines the bad. Davuluri herself said she was not surprised or bothered by the comments. She had experienced a similar reaction when she became Miss New York, and thought that it might happen again. But Davuluri pointed out the support she got from Vanessa Williams, the first African-American to win the pageant in 1983. 30 years ago, Williams was treated the same way, yet a black Miss America would not cause any reaction today. This is a case where it shows how much racial awareness has evolved, and yet how far we still have as a society to go.

Davuluri’s win and the comments that followed have sparked plenty of debates and questions. Such as, would a similar reaction take place if this happened in Canada, and are people of Indian descent offended by the comments, or proud of Davuluri’s accomplishments? Brantford Laurier students Swathy Sooriyakumar and Jujhar Singh offered their thoughts on the matter as people of Indian descent.

Sooriyakumar, a Sri Lankan Canadian born in Markham, and second year journalism major, was not fazed by the tweets. “I actually found it hilarious that there are people out there that still think this way. This girl is beautiful, successful, and has a degree in medicine, but all these people that don’t feel good about themselves go on twitter to be bullies,” Sooriyakumar said.

While she was not surprised by the negativity, Sooriyakumar was taken aback by the extreme that some people went to. “I knew that something might happen, but not to that extent. Some of the stuff is just stupid, like people actually saying ‘doesn’t Miss America have to be American?’ People really need to think before they type.

Jujhar Singh is an Indian citizen from Bahrain and second year Business Technology Management major. His initial reaction was that of pride that a woman of Indian background won. He did not expect any negative reaction, because to him she is just as American as anybody else. “It’s kind of stupid. She is of Hindu background, not Muslim, and an American first. What does that say about their president, of Kenyan ethnicity, if they don’t think she is a real American?” Singh asked.

Neither of them thinks something like this would happen in Canada. “Sure, in Canada we are stereotypically nicer, but Canada is also a lot more diverse. There are so many different cultures here. In the States they might be more old fashioned in their thinking, but we are much more accepting here,” Sooriyakumar said.

“Canada has been built by multiculturalism. I think there are 141 different nationalities here,” Singh said. And while they both pointed out that a similar video recently surfaced from Brampton, Singh was quick to say that the girl who made the video eventually learned and admitted she was wrong. “She apologized, and the video died off. To me that shows the nature of Canada,” Singh said.

Singh has not experienced any racism directly, but said that his dad was once arrested in an airport in Turkey because the guards thought he was Osama Bin Laden. “He just laughed it off and they let him go,” Singh said. That is the attitude that Singh has about racism in general. He does not like it, but it happens, and life goes on. “Hopefully this enlightens people about different cultures, and some people can learn a lesson as a result. It was going to happen eventually, anyway,” Singh stated.

Sooriyakumar has a tougher time believing that people still act that way. “I think if everybody takes more time to use common sense, that will go a long way towards in stopping racism. I think it has a lot to do with people having such easy access to technology and not thinking before they type,” Sooriyakumar said. She has not personally experienced much racism either, but there was a time when her and some other friends of colour were at the beach and told that they belonged in the shallow end. “We were a little surprised, but we just ignored him and kept swimming,” Sooriyakumar said.

They both think that more good was accomplished then bad. “The judges selected her to win, and the judges are American. They could have picked Miss Kansas, who was blonde and white, but they picked Miss New York because she deserved it regardless of her skin colour,” Singh said.

“I’m just so proud of her,” Sooriyakumar said. “Competing in a pageant is really hard to begin with, let alone actually winning and she had to deal with all this twitter stuff. But she kept her head high, and is a great example of the Indian culture and what people can overcome.”