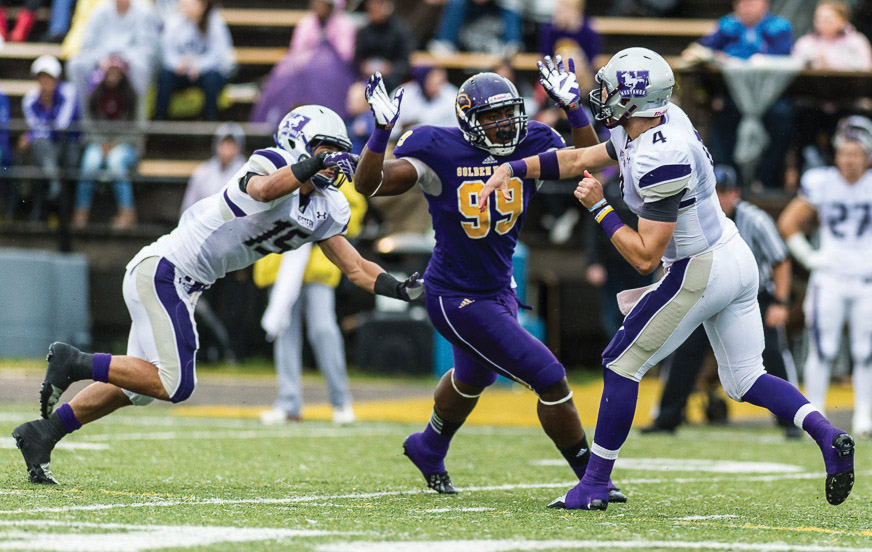 When it looked like an upset may be possible, Laurier’s bubble burst. When the final whistle blew, it was simply a Saturday like three of the four before it; ending with a crushing loss, 45-24, to the Western Mustangs (5-0).The first half of the game belonged to the Golden Hawks (1-4). After one quarter of play, Laurier was up 10-0 on the second-ranked team in the CIS. The tide began to turn with the Mustangs scoring five points to cut the lead in half on a safety and field goal by Lirim Hajrullahu.

Laurier would be re-energized with just over four minutes to go in the second quarter when running back, Dillon Campbell, took a hand-off from quarterback James Fracas, and broke away from the Mustangs’ defense. 100 yards later, Campbell was in for the touchdown to put Laurier up by 12. Plays like this made it seem like the Golden Hawks were going to pull off the upset. The momentum and crowd was on their side.

But things began to crumble when the Mustangs got the ball back. With only a little over a minute left in the second half, Western running back, Yannick Harou, punched in for the touchdown from the goal line.

That proved to be the turning point, as Western came out in the second half and showed why they were the second-ranked team in Canada, scoring 17 unanswered points in the third quarter. With a 29-17 lead, Western did not look back. They held the Golden Hawks to a single touchdown in the entire second half, on their way to a 45-27 victory, and their fifth straight win dating back to the start of the season.

The Golden Hawks have passed the halfway point of the year, and once again will finish without a winning record. It has been four years since Laurier was over .500, when they finished with six wins and three losses in 2009. It is very unfortunate for a team that is less than a decade removed from canadian university football glory, when they were winners of the 2005 Vanier Cup.

All that’s left to look forward to on the schedule is next Saturday’s Homecoming matchup against Windsor. Although not a powerhouse like Western, the Guelph Lancers (5-3) are a difficult matchup.

What’s a relief, for a Laurier defence that has struggled at times this season, is that Windsor’s quarterback, Austin Kennedy, may miss the September 28 matchup due to injury. Kennedy injured his knee running in the third quarter of this past week’s game against U of T. Kennedy is versatile, being able to pass and run the ball effectively, and could prove tough to contain.

Things only get tougher from here, so hopefully Laurier puts on a good show for the Homecoming fans. The Golden Hawks will finish the season with games against Queen’s University, third-ranked in the CIS, and ninth-ranked McMaster.