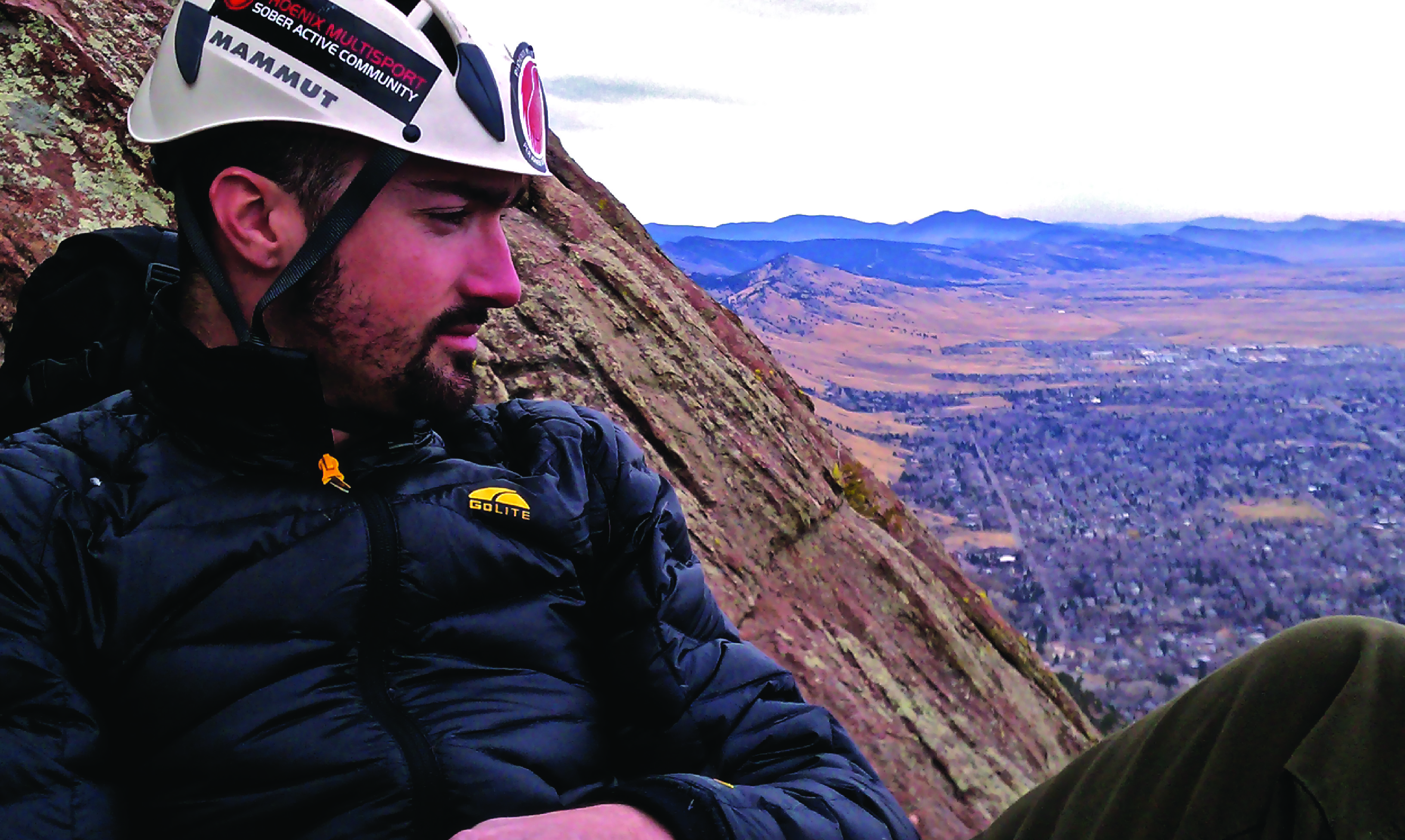 Today’s athletes and the sports they play are constantly portraying a poor image, only garnering negative press. Whether it is the fact that sports are now unsafe and too violent because of the concussions they constantly cause, the multiple occurrences of homophobia and racism in locker rooms, or the exorbitant amounts of money players make that no one feels they deserve, the positive impacts they can have on someone’s life is lost in the shuffle.

There are a lot more to sports than what everyone sees on television. They are one of the most positive outlets for people to change how they feel about themselves, and sports are a way for friendships and powerful communities to bond. Nobody embodies this more than Boulder, Colorado native, Rourke Weaver.

Weaver’s life has changed drastically with the help of sports like rock climbing, snowboarding, boxing and Brazilian Jujitsu and, without them, he might not have been alive to share the dark story of his addiction to alcohol and the toll it had taken on his life.

The first time he remembers being drunk was at the age of 12, going upstairs and drinking out of the liquor cabinet with a couple of his friends. According to Weaver, something clicked that he could not shake. “I remember thinking ‘this is what it was all about’,” he reminisces.

However, getting caught by his parents, accompanied with the punishment and anger that followed, scared him out of drinking again until his sophomore year of high school, which was the turning point into when his alcohol use and life spiralled out of control, being charged with a DUI (driving under the influence) and three times with an MIP (minor in possession), all before barely graduating.

He got accepted into a small community college in that Weaver feels he had no right being enrolled in located in a small Colorado ski town called Steamboat and during the three years in which he lived there, his alcoholism completely took over his life. Nothing was going to stop him from getting that next drink to stay on his alcohol fuelled high, not even court-ordered daily breathalysers. Like clockwork, he got up every single day to get drunk. “Maybe a couple days over the next three years [in Steamboat] that I was actually sober,” Weaver recalls. “It made me sleep better because I started having withdrawals … So, I’d have a couple more drinks to sleep a little better.”

By the end of his time in Steamboat, the toll on his body from his alcoholism began to show: his hands shrivelled up; he had multiple withdrawal seizures while working, leading to him losing his job and he had constant auditory hallucinations. What’s so disturbing is that none of this discouraged him from drinking. “[My hands] just wouldn’t work,” he says. “I was 20 at the time, going on 21… and the most humiliating thing was that I’d go into this bar, be poured a double-shot into a glass and drink it through a straw because I couldn’t pick it up – my hands were shaking so bad.”

He couldn’t handle sinking this low and the pity and sorrow it caused his friends to see, so he tried to quit, but it caused him the strongest withdrawal symptoms yet, being accompanied by not only by auditory hallucinations, but visual ones as well. He simply wanted to die.

A friend found him in his dilapidated apartment and took him to a hospital where he was strapped down and kept in the ICU for four days before being awoken to doctors, police officers and his parents – not being sober was no longer an option.

He promised his mother that he didn’t have a problem and that he could go at least a month without touching any alcohol, but he never got that far. After what he thought was a month of sobriety, he went out and celebrated with his friends, got drunk and returned home to find his mother waiting for him. She was so upset that he didn’t keep his promise, even though Weaver assured her that it had been a month of sobriety. “My mom pointed at the calendar and it had only been two weeks,” Weaver said. His mind tricked him into thinking that he had gone a month without alcohol just so he could drink again.

The extent of Weaver’s alcoholism finally sunk in when he was driving drunk to pick up his brother from high school to see their grandfather on his deathbed. The disappointment on all of his family’s faces was too much to bear. His mother took him outside and explained that she couldn’t take it. “It’s an important thing for parents to realize that they can’t save their kid,” Weaver says. “I was given everything in the world [from my parents], all the love they could give me, but I was still an alcoholic. And [my mom] finally set some boundaries.”

Weaver checked into a detox clinic and went through an IOP (Intensive Outpatient Program), a 90 day monitored recovery program. He lasted 28 days before St. Patrick’s Day rolled around and he relapsed. This was the end of the line for his parents and they kicked him out of the house for good. “There’s nothing I can equate to putting the one who loved you and raised you through that kind of hell,” Weaver says. “To make a person look at her child and tell them they’re not welcome anymore. It is pain I can’t even explain.”

A homeless Weaver couch-surfed for a while, at the lowest point of his life,  and asked his best friend for five dollars to buy a sandwich but instead bought alcohol. “It’s difficult to explain, but there were only two options in my head,” Weaver explained. “Either drink this 40 or blow my brains out. I was ready to go.” At that moment, he feared being sober so much that he would rather kill himself than try and go through with it. But a few phone calls from a friend made a lightning bolt of realization strike him. He knew that he had to do whatever it took to get sober and April 12 will mark the seventh anniversary of not touching a single drink for Rourke Weaver.

But it was through a second IOP program and the 12 step process of sobriety that led him to Phoenix Multisport, that without he’s not sure if he could’ve kept it up. Phoenix Multisport is a free athletic organisation that encourages recovering alcoholics and other substance abusers to use sports to develop the confidence and strength necessary to stay sober. He was approached by founder, Scott Strode, a former substance abuser himself, to check out the program.

Phoenix took advantage of one of Colorado’s best features, the Rockies, with their main offerings being rock climbing, hiking and mountain biking. With Weaver being a native Coloradan, these were all things he grew up with and were so important because it allowed him to reconnect with one of the only other things that he knew that wasn’t alcohol. He fell in love with rock climbing, something that was once so familiar to him. He now wanted to be sober so he could continue to improve his strength as a rock climber. “There weren’t a lot of wins in my life… to go up and climb and then come back down was the smallest piece of ‘Hey, you can succeed at something.’ And to see your skill level rise that was a little message that you can be successful,” Weaver says. “I took that in my own recovery and changed my mindset… it showed me how to have a relationship with my family, how to get a job, how to pay rent… A lot of it came from that encouragement on the rock wall.”

And he certainly did become successful. After only two years of sobriety and climbing, he was able to climb 18,000 ft in the air on Mt. Illimani in Bolivia with his newfound close friend Strode by his side. “I was a complete wreck two years ago – my life was over and I was about to kill myself and here I am in Bolivia climbing major peaks, hanging out with a great friend of mine,” Weaver recalls.

But Weaver feels his greatest athletic achievement was in Brazilian Jujitsu three years ago in which he captured gold in a tournament in Las Vegas. “I won this competition that I just didn’t even believe was possible,” Weaver says. “I just didn’t want to get kicked out first round.”

Sports gave Weaver something to look forward to – he turned alcohol, the addiction that controlled him so fully that he couldn’t live without, into a passion that allowed him to grow as a person. Each day he is a little better and staying sober is a little easier because there is a new wall to climb or a new challenge that he loves to try and accomplish.

He is now sharing his athletic outlet with others, after opening up a Denver chapter of Phoenix Multisport in 2012, with the hope of showing people struggling with alcohol and substance abuse that the fight is never over. “It feels like the walls have closed in a round you and that there’s nothing left,” Weaver says. “That cloud, that sadness, that gut-wrenching feeling and that panic will not last forever. Things seem so dark, but the other side is unbelievable.”

9 thoughts on “Rourke Weaver’s story of triumph over addiction: Turning severe alcoholism into an athletic passion”