An adrenaline addiction might just be a good thing 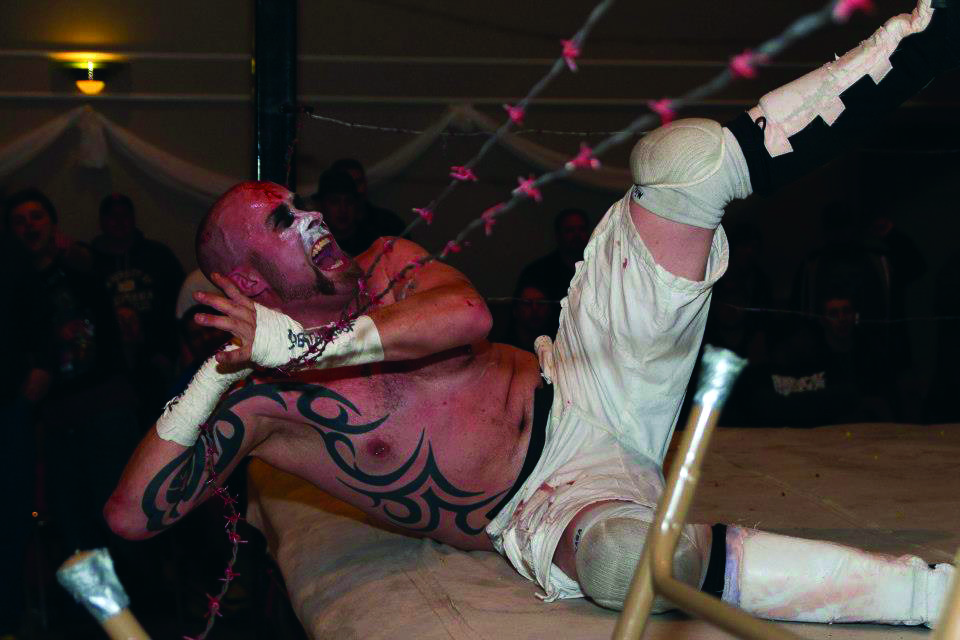 Thirty year old Chad Michael Gowing of Cambridge is a people pleaser in a way that he can no longer control. Gowing is addicted to wrestling, in specific, the adrenaline he gets from it. “Getting in front of a crowd of people that have no clue who you are, and they cheer you or boo you, that’s what’s addictive,” explains Gowing.

Gowing has been perusing his love for wrestling since he was 17 years old. He is the founder of Deathproof Fight Club, a fight club that performs not only wrestling, but everything else to show that it is “death proof” to the crowd. The items used in their shows can range from barbed wire or a staple gun to a running weed whacker. It is a bloody and gory version of the usual wrestling.

Gowing admits that he lacked attention throughout his childhood because of his parent’s divorce, and thinks that is why he gets such a high off of the attention his fans give him when he is on stage.

When Gowing is in the ring, he is a completely different person, he is Warhed. Gowing defines Warhed as outgoing and confident, but out of the ring he explains he is normally very sheltered. Gowing says that Warhed will say and do things that Gowing never would when he is not doing a show.

“I feel like a superhero; I feel popular. I was never a popular kid in school, but once I throw on the makeup and come out and, you know, fight, everyone loves me,” Gowing says with a smile.

Gowing suffers with depression and says wrestling is his release from it. Actually, Deathproof all began as a therapy for his depression. He had no idea it would turn into the successful and popular company it is today.

Gowing’s fiancée, Alexandra Spicer, is the first girl in Gowing’s life that has not let the wrestling come between them. “I don’t mind it because I know it’s something that is positive in his life, but at the same time the injuries aren’t always fun to deal with,” says Spicer reluctantly. She admits that she worries all the time, but is more comfortable going to his shows now that she can tell if he is actually injured or if it is just a part of the show.

Gowing has less faith in himself of giving up his addiction. Death is the only thing that could stop Gowing from wrestling in his opinion. The longest he has gone without wrestling was eight months. “The grown up in me says, ‘hey, it’s time to give this up because you’re injured, you hurt every single day,’” Gowing explains. “But I can’t … It’s just, to be someone else and have people actually like me.”

More than one older and experienced wrestler has told Gowing that wrestling is harder to quit than heroin. “Or they say that being in wrestling’s like being in the mafia, once you’re in you can never get out,” Gowing recalls.

But Gowing does truly believe wrestling is beneficial in his life because it gives him a sense of accomplishment and makes him feel loved. On the other hand, Gowing has suffered from many injuries. He has had 12 concussions; dislocated his thumb, hip and both shoulders; popped all the ligaments in the back of his neck and cracked his heel throughout his wrestling career.

“At first it was just the wrestling part,” Gowing explains, “but now that I’m running my own show I get to see my own ideas come to life in front of me, and that’s even more addictive.”

But with Gowing’s wrestling career, comes a lot of drama and hatred. “I’m the most hated wrestler amongst Ontario Indy because a lot of wrestlers say I’m untrained, I don’t know how to wrestle, hard core is stupid, I’m just a backyard wrestler— which is like the biggest insult,” says Gowing with a chuckle. Although he used to let it get to him, he says he knows that his company has a better following than all these “haters’” attempts at fight clubs, so the evidence backs him up.

The negativity also makes Gowing want to train harder to prove himself against these people. A few of the many wrestling schools Gowing has trained at are Wrestleplex, Heart Brothers School of Wrestling (which has since closed down), Squared Circle and Hamilton Fight Factory.

Although doctors have been telling Gowing he needs to stop wrestling since he pretty much began, no injury has stopped him yet. He admits there are a lot of negatives that go with his addiction, such as injuries, finances and drama, but the good outweigh them every time.

Wrestling gives Gowing a kind of high unlike any other, one that lasts for days after his matches. “All throughout my life, I’ve always been the loner, never been the popular one, but when I put on the makeup and I’m Warhed, it’s the guy I’ve always wanted to be. No regrets,” says Gowing with a grin.