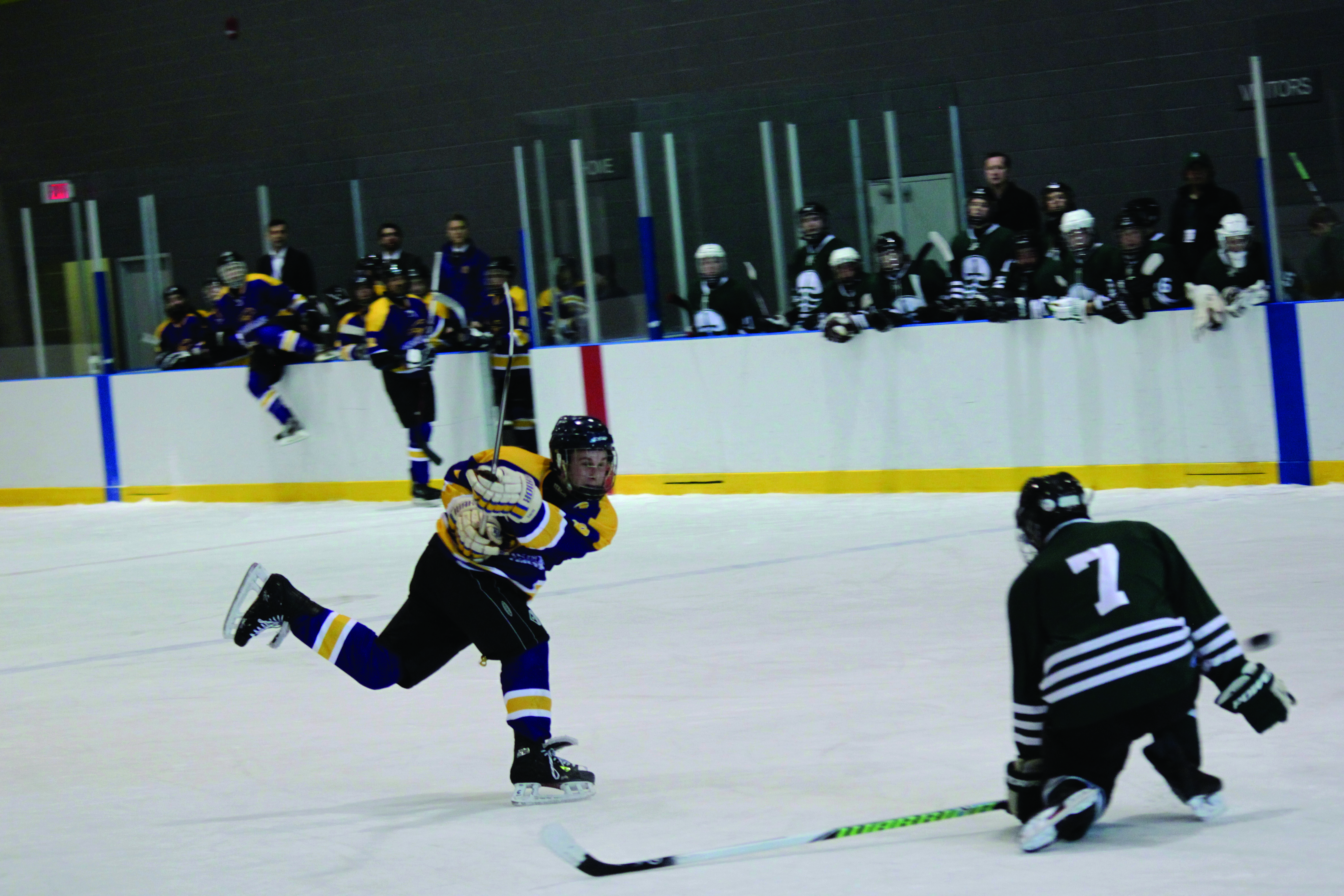 Every great team has to go through hardship at some point; disappointments and heartbreak provide great teams with motivation and things to learn for next year. Some grow from those moments like the NHL’s Boston Bruins who won the Stanley Cup the year after they blew a 3-0 series lead and a 3-0 lead in game seven the year before that. And some don’t; see the Leafs who are currently getting out shot at the same pace as last year. The Wilfrid Laurier men’s extramural team had their moment during this year’s Challenge Cup on home ice at the Wayne Gretzky Centre.

In their quarterfinal game against Georgian College, the Golden Hawks were leading 2-1 with 4.4 seconds left in the third period. Earlier in the tournament, the Golden Hawks got out played by Georgian and looked lost as a team, but in the quarterfinals they played great. Normally in this situation, you want to tie the other player up off the faceoff circle and try to fall on the puck to waste time, but Georgian won the draw cleanly and got the puck to the point. Their defensemen fired a shot through one of the Laurier player’s legs and the puck got tipped on the way to the net. Ben Brunner got a piece of the puck, but not enough as the puck crossed the goal line with 0.1 seconds left.  Laurier would end up losing the game in a shootout and the defending champs were eliminated.

This loss is as bad as it gets. Players were in disbelief after the game thinking how close they were and how well they played as a team, only to lose a game like that. But this team has come a far way and has shown that they can change and adapt in the short and long term and learn from their mistakes. When Laurier played their exhibition game against McMaster earlier in the year the team had a lot of firepower but could not defend. This was a trend throughout the year but in the final tournament of the season, they were able to start playing well as a team and come together defensively.

At the start of the tournament, the team played well structurally but could not get the puck in the net. Part of the problem was that they faced a goalie that stood on his head in their first game.  Laurier played Trent University and pushed the pace and controlled the play in the offensive zone. Laurier took shot after shot but the Trent goalie would continue to stand on his head. With two minutes left in the game Trent put in the go ahead goal and won the game 1-0.

Laurier then had to play Georgian College in their second game. Earlier in the year they played Georgian and lost in a back and forth game. But this game was much worse. Laurier had four power plays throughout the game including a five-minute major, but they could only muster one goal. They had problems structurally entering the offensive zone and leaving the defensive zone. The breakouts were messy in the neutral zone. Laurier ended up dropping the game 4-2 and they were forced to have a lower seed in the final bracket.

“We started off the first power play with an umbrella formation and thought we’d get more chances shooting. But obviously that didn’t work,” Coach Kelan Herr talked about the teams systems after the game. “We have a bunch of guys in the locker room that we can bounce ideas off of and we can take it from there.”

The second day was a win or go home day and Laurier was facing the University of Toronto Scarborough. Laurier looked like a different team in the game. Their breakouts out of the offensive zone were more organized and they were able to move the puck in the offensive zone with ease. Laurier let in an early goal but that didn’t mean it was time to panic. Laurier continued to play within their system and drew a penalty within the last five minutes of the game. Laurier was finally able to score thanks to a back door pass to Blake Dionne and Laurier tied the game up at one.  After that Laurier added another to put themselves up 2-1 and they were able to hold the lead and advance to the quarterfinals.

“We actually had a 24 hour rule; we didn’t talk about the tournament the night before and drew up different breakouts before the games today and just focused on having fun,” Coach Herr says about his team adjusting in day two of the tournament.

In the quarterfinals Laurier lost to Georgian College in a heart breaking fashion, but they grew as a team throughout the year and the tournament.  They learned how to play a defensive system to help give their goalie some support and they showed a willingness to adapt to change mid way through a tournament.

“From where we started we did not think that we could make it this far but we came together as a team,” David Howe says after the game. Looking forward captain Howe says that next year he hopes to get the team together more often and that should help with the overall communication.

Howe says that the one player that improved throughout the year was second year player Kevin Lamplough. “That kid goes all out every single shift and I don’t know how he does it. He is huge on the penalty kill and the guy just does everything.”

Part of becoming great is fighting through adversity and learning from it. This team learned how to play defense throughout the year and learned to change their system to give them the best chance at winning the Challenge Cup. Next year this team should grow and have a decent shot at reclaiming the Challenge Cup.