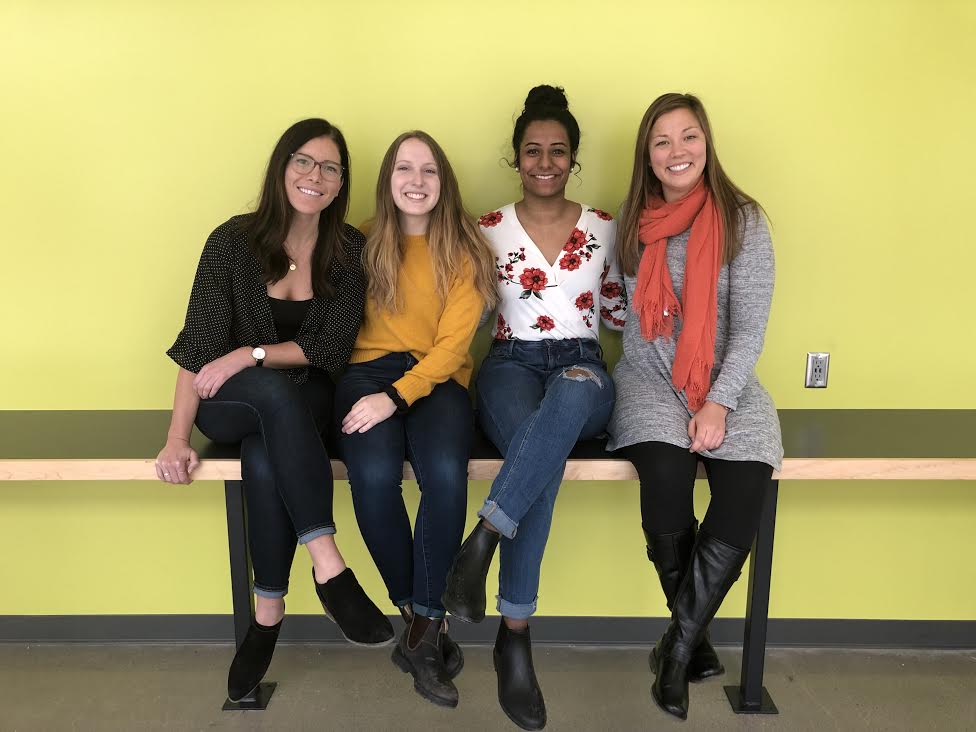 Who run the world? Girls! Especially at Laurier Brantford Athletics and Recreation.

Despite being on a continent where 80 per cent of athletic directors are men, Laurier Brantford beat the odds and currently carries a leadership team that is 80 per cent female.

Every day the small but mighty team organizes the chaos of varsity teams, extramurals, intramurals, sport clubs, social media, athletes, tournaments, games . . . essentially anything and everything that goes on within Laurier Brantford Athletics.

“Everyone’s very passionate and a strong leader within themselves,” Dobbs said of her coworkers.

The team seems to be everything an employee could ever want in a workplace family. The dynamic carries a satisfying balance between work and fun.

“It’s a very positive and engaging work environment,” said Dobbs. “There’s always something to talk about. It’s a connection within Laurier that isn’t just showing up, doing your job and leaving. It’s giving you those personal connections too.”

As Manager of Interuniversity Sport Programs, Megan Jacklin spearheads the team. Confident, knowledgeable, productive and friendly, Jacklin is the unstoppable force behind the purple and gold.

“Jack of all trades,” said Gnanaharan. “She literally kicks butt at everything she does.”

Jacklin was heavily involved in athletics throughout her university career and leading up to her full-time position. The Laurier alumna was involved as a fitness instructor, student leader, athlete and active gym-goer. Her various roles and dedication to the department made her more than qualified to jump into the full-time role she’s in now.

Since stepping up to the position, Jacklin has helped Laurier Brantford move in to the new YMCA, kick-started Laurier Brantford’s varsity programs, restructured hiring processes and provided better access to conferences for her coworkers.

To many, the task of running an athletics department for an entire university might seem like a daunting task, but Jacklin handles the constant pressure with ease. Dobbs noted Jacklin’s organization makes carrying out responsibilities a smooth process.

“Meg is the queen of organization and planning,” said Dobbs. “If you ever want anything done in the most meticulous fashion you could ever find, Meg’s your girl.”

In the desk across from Jacklin is Madlynn Palmer, who oversees extramurals, sport clubs and the department’s social media presence. Palmer is the newest Golden Hawk on the team, having attended school at University of Waterloo and coming into her position with Laurier Brantford Athletics just this school year. But purple definitely seems to be her colour.

“Really throwing herself all in has been her biggest superpower,” said Jacklin.

One of Palmer’s initiatives this year was the Pink Strong campaign that raised money for cancer. According to her coworkers, it took off with flying colours. She is known to be a bold and driven member within athletics.

“I think it’s probably one of her strong qualities,” said Gnanaharan. “You get to know what she means and who she is pretty quickly and you get to know how to work alongside her.”

Palmer is also an encouraging leader among her coworkers.

“Mady embodies the ‘got-your-back’ perspective,” said Dobbs. “She’s always coming back with positive reinforcement and saying, ‘You did this really well; I’m proud of you.’”

Palmer was actively involved in athletics during her time as an undergraduate student. She represented University of Waterloo as a varsity swimmer, worked in the student success office, was constantly volunteering time to do community outreach programs, and started the Rise Up program – a peer mentorship program in which first year student athletes get paired with upper-year student athletes.

Jacklin and Palmer are the only two full-time staff within Laurier Brantford Athletics and Recreation. The dynamic duo spends all day every day together, but they’re not sick of each other yet.

“Meg and I work really well together,” said Palmer. “I enjoy coming into work probably mainly because of her.”

One door down the hall is the student leaders’ office. Rachel Dobbs, Sai Gnanaharan and Jonathan Knowles are upper-year students who work for the athletics department part time in coordinator roles.

“The student leaders we have this year are amazing; they’re really strong,” said Palmer.

This year, Rachel Dobbs took on the role of sport clubs coordinator. Dominating her role while also balancing everything else she’s involved in on campus has blown minds along the way.

“She’s involved in everything I feel like,” said Palmer.

“There’s a lot of random things she does on campus but she knows exactly how everything is happening and when,” said Gnanaharan

Dobbs originally didn’t even consider applying for the position. But last year’s sport clubs coordinator, Kayla Babcock, couldn’t help but notice Dobbs was the perfect fit for the position. Dobbs has competed for Laurier Brantford as varsity athlete, worked at the Hawk Desk and led Residence Athletic Council. The leadership skills, knowledge and commitment were all there.

Dobbs’ coworkers noted she’s organized and a strong leader, and even though the fifth-year concurrent education student has got a lot going on in her life beyond her coordinator role, she puts high-quality effort into every task she’s given.

In the desk beside Dobbs is Sai Gnanaharan. The fifth-year concurrent education student has always been heavily involved in Laurier Brantford Athletics and Recreation. After participating in intramurals, running on the varsity cross-country team, volunteering for Relay for Life, working at the Hawk Desk and working as the social media and events coordinator, Gnanaharan was more than ready to take on recreation program coordinator.

Gnanaharan is one of those students who seems to know everyone, which has been beneficial to the athletics department in many ways.

“She’s a social butterfly,” said Jacklin. “She knows all the athletes, whether she’s played with them, or has worked with them, or knows them in general through campus. She has great relationship-building abilities. That helps her in her role because athletes feel comfortable working with her.”

Working alongside the girl power in the department is Jonathan Knowles, Gnanaharan’s fellow recreation program coordinator. Knowles previously worked with Dobbs and Gnanaharan at the Hawk Desk, and currently plays on the men’s extramural hockey team.

“It’s always great when your coworker ends up being your good friend,” said Gnanaharan. “As my partner in crime, we work alongside each other and so I’d like to say I know him pretty well. He is the most easy going and relaxed man I know, which makes working with him a breeze.”

“Jon is very easy to work with,” agreed Dobbs. “He is super helpful when it comes to getting down to the nitty and gritty of a task. He’s detail oriented and efficient but keeps the mood light.”

Full of a lot of love for Laurier Brantford Athletics and his leadership team, Knowles supports the female-dominated department.

“Especially in a campus that has the ratio of women that it does, it’s important to have [female] representation at a high level,” he said.

There’s no doubt there is no better fit for the Laurier Brantford athletic leadership positions than the people who are currently in them.

“When people at Laurier see us in our positions, nobody questions us,” said Dobbs. “Nobody looks at us and asks, ‘Why is it them?’ They know we’re here for a reason.’”

Wilfrid Laurier University has been a supportive environment for women in athletics, and the fortunately the support extends even beyond just the campuses. The Ontario College Athletics Association (OCAA) carries almost an even balance of men and women in athletic director positions. Jacklin said usually about half the women she sits with at the OCAA athletic director roundtables are women.

“It’s really humbling to know the membership we’re affiliated with is so welcoming of women leadership in athletics and are respected in those roles,” said Jacklin.

Unfortunately not all leagues, universities and post-secondary institutions have reached the same level of equality yet, but all the leaders in Laurier Brantford Athletics and Recreation agreed the future for women in athletics is positive.

“It comes down to advocacy and awareness,” said Dobbs. “There’s no reason there should be gender segregation in these roles. If you have a skillset, you should be able to fulfill that skillset.”

“I don’t see a difference between a man or a woman being in power or in charge,” said Gnanaharan. “I have great experiences working with very strong and independent women.”

Every single one of the leaders in the athletic department is passionate about their role and athletics. The team works hard to foster a friendly and welcoming space for everyone. Because the team is so small, personalities are able to really jive and the group becomes close-knit.

“We’re able to bounce ideas off each other and share stories,” said Dobbs. “Office hours turn into just hanging out. We still get everything done, but it’s an opportunity to regroup and see each other.”

It is also a common goal among the leaders to extend the sense of community past the walls of their offices. The Athletics and Recreation department is home to an entire population of students and the leaders recognize it’s part of their jobs to make sure those students feel welcome too.

“We really try to make everybody feel comfortable and find their place within Athletics and Rec,” said Jacklin.

Thanks to a talented and unstoppable team of leaders, Laurier Brantford Athletics and Recreation has become a place of family, fun and familiarity to students across campus.