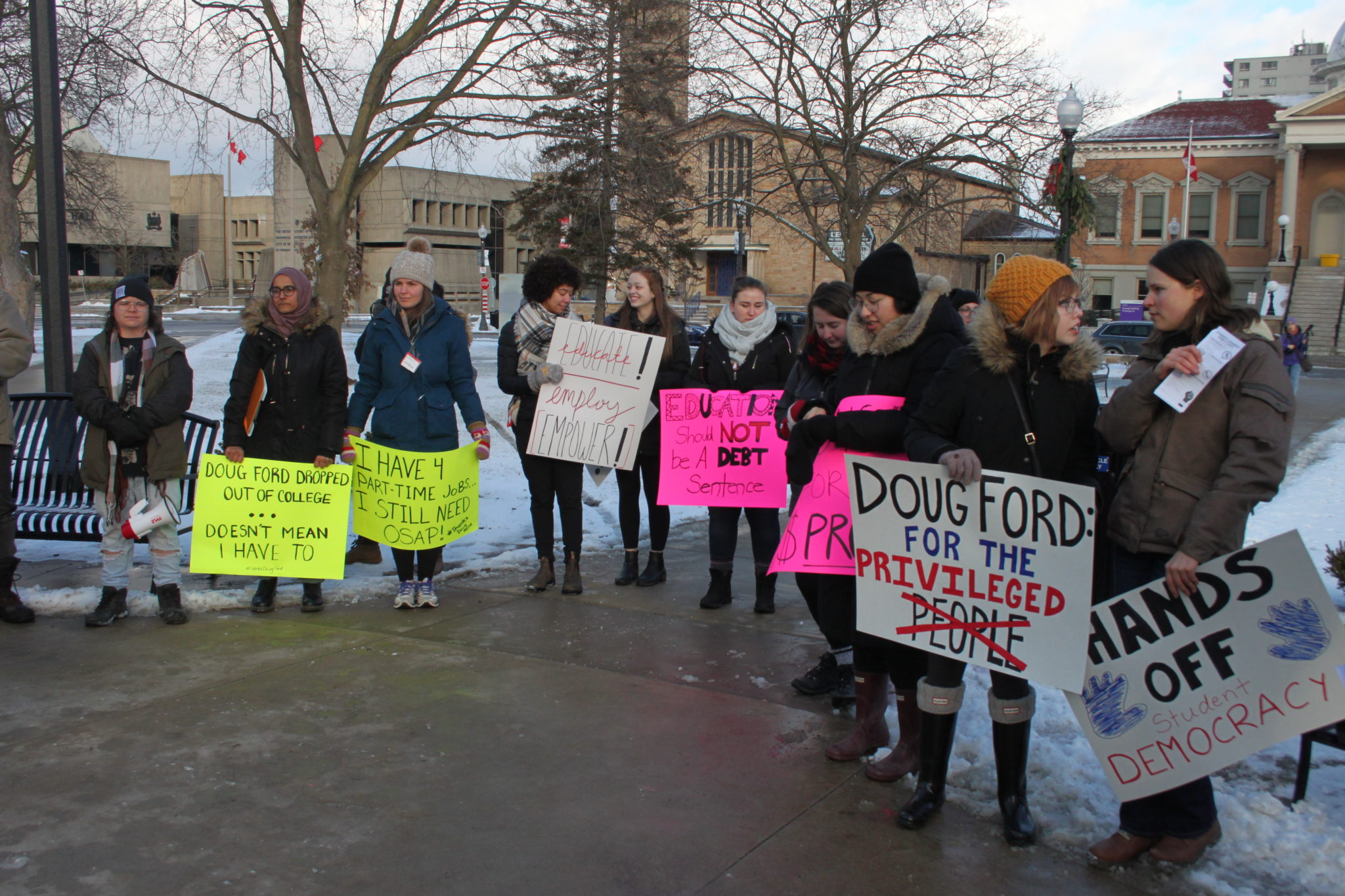 Doug Ford’s recent cuts to OSAP funding has lead the Laurier community to come out in protest.

Thursday, Jan. 24, students, faculty and residents of the Brantford community gathered in Victoria Park to protest the recent cuts and changes made by the PC government to how OSAP will be distributed and paid back.

The protest was co-organized by Hannah Scott and Sarah Wiley, who both study social justice and community engagement at Laurier Brantford.

“One of the things I wanted to do was educate. People hear what’s in the media, and that’s not always true. Sometimes there are lies out there”, said Scott for her reasoning to why she wanted to gather her peers and protest, “If people all across Ontario do this then maybe the government can actually listen to us and what we need” Scott continued.

“We are definitely people who have a lot of problems with a lot of the policies of the Ford government. We’re activists in the community who like to do a lot of this work”, said Wiley.

Some of Ford’s changes include an elimination of free tuition for low-income students — recently the province’s auditor general warned that costs associated with the OSAP grant program had risen by 25 per cent, as a result the PC government has reduced the family income threshold required to qualify for OSAP funding. Students from low-income families can still qualify for funding to cover their entire tuition fees but some of the funding will be a loan as opposed to a grant.

Wiley and Scott hoped that by organizing this protest it would urge students to look closer at the decisions made by the PC government. “The students who are going to be most affected are marginalized and poor students who don’t have the resources to otherwise afford their education outside of OSAP grants”, explained Wiley.

“I think that the government is playing a shell game with what they’re doing”, said Rob Kristofferson, an associate professor at Laurier Brantford. “They’re taking 2 billion dollars that was allocated for OSAP grants saying that that’s too expensive giving students a rebate that amounts to $360 million and saying that that is adding something to student’s experience when it’s not they’re actually taking away.”

Kristofferson believes that these changes will make it less accessible for students to receive post-secondary education.

The PC government also allowed for the elimination of the interest free six-month grace period that students once had before has been eliminated by Ford, a choice that the PC government alleges will “reduce complexity for students”

Wiley described these decisions as a “cash grab from the Ford government.”

“It’s also requiring most students — if they are still going to be getting OSAP — to get loans which they’re going to have to pay the government back a heck ton of interest, which is not good for anybody,” Wiley stated, “ I mean anybody who reads about the proposed 10% tuition cut should know that it’s not anywhere comparable to the money we’re going to be losing from the OSAP grants and it’s really just a sugar coating to cover up the amount of money that they’re taking away from students.”

Ford’s changes will leave students with a choice in which ancillary fees they will have to pay. Fees for health services, athletics and other chosen programs will remain mandatory but organization, clubs, and groups on campus that inform, educate, and provide for students may be at risk.

“Things like student newspapers, student unions and lots of important student leadership groups are going to be de-legitimized, defunded and not have the ability to advocate for students and really hinder the student movement as a whole”, said Wiley.

The students gathered in Victoria Park ranged from first-year students — who would have to deal with the changes to OSAP in their ongoing university careers — to students in their last year who would be heavily affected by the elimination of the six-month, interest free grace period.

“We’re here today because our provincial government has decided that it does not value making investments in the future of this province. It does not believe in the value of investing in student futures now, so that society may reap the benefits of our talents later”, said first-year student Cody, as he addressed the crowd gathered in the park.

Scott, who is in her last year describes herself as fortunate to finish at this time, “But there’s people I love who are coming up in high school who will be coming to university that now don’t know if their education will even be possible. The people who are undergrads at Laurier will now be struggling because they don’t know if they’ll be able to continue their education.”

Students weren’t the only ones to speak out at the protest, faculty and employees from campus groups also spoke out as well.

Protesters started at Victoria Park before marching to Will Bouma’s office — MPP for the PC party in Brant’s riding. They could be heard chanting “education is a right, not just for the rich and white”, as well as “hey, ho Doug Ford/Will Bouma has got to go”

Will Bouma was seen leaving his offices as protestors were arriving.