Laurier Presents Conversations with Leaders – A Discussion with Senator Sinclair 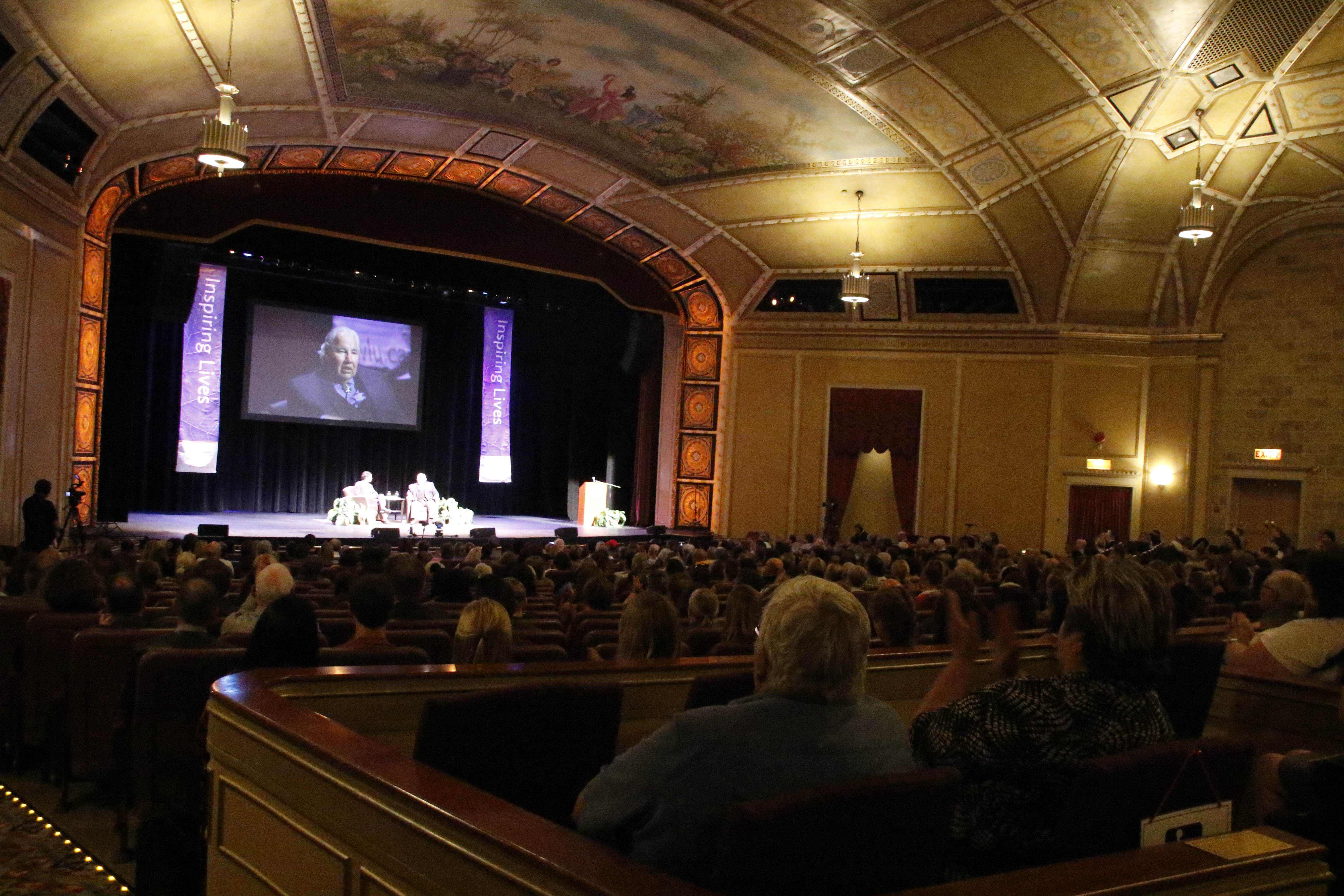 On the cool evening of Saturday the 15th, close to 500 people convened at the Sanderson Centre for a special occasion. Laurier was hosting its third annual Conversations with Leaders speaker series and this year around, the two guests attracted quite an audience.

At approximately 7 p.m. a hush fell over a theatre room full of Laurier students, staff and faculty, community members, and out-of-town visitors, as the two very special guests were introduced.

Duncan McCue looked over at the Senator and started off with a few words in his traditional Aboriginal tongue, and while the senator chuckled, he turned around and translated for the audience, “I just said, yo what’s up.”

Senator Sinclair had an air of ease and humor about him, despite his extensive and impressive resume. Born and raised in Selkirk, Manitoba the high school class valedictorian attended the University of Winnipeg, and graduated from the faculty of law from the University of Manitoba in 1979. He was called to the Manitoba Bar in 1980 and worked primarily in the fields of Civil and Aboriginal Law.

“I loved being in court. I loved advocating, I loved arguing, I loved researching, I loved everything about being in court. During that time, I was continuing being involved with the community, I was continuing to represent my people, and then upon graduation representing people who needed a lawyer. My wife keeps reminding me that at that time we almost went broke because I wouldn’t charge people for services. If they needed a lawyer, and I was available, I would do it,” said the Senator.

While appointed as the Associate Chief Judge of the Provincial Court of Manitoba in 1988, he was the first Aboriginal judge in the province, and the second in Canada. In 2009 he was named as Chair of the Truth and Reconciliation Commission of Canada. Their mandate is to inform the Canadian public about the experiences of the Indian Residential Schools through vocalizing and acknowledging the impact it had on its survivors.  The ultimate goal of the TRC is to help both the Aboriginal and Canadian peoples to come together to reconcile the injustices of the past in order to move forward.

“I think that we are incredibly lucky to have him here and to really showcase the amazing work that he has done on behalf of Indigenous peoples across Canada in order to help raise awareness of the residential school,” said Bonnie Whitlow, the Aboriginal Student Support Co-ordinator for the Brantford campus.

While the speakers were able to successfully create a light and comic atmosphere, they took on some challenging topics, one of them being the importance of education.

“My grandmother was very clear that we all had a responsibility to help people,” explained the Senator, “She was in her sixties when I went to live with them and she had a house full of daughters who were my aunties. And the way that she raised us was by assigning each of us to one of the aunties. So I was raised by an aunty who was a teacher. That relationship between my aunt and I was very strong and my aunt nurtured my educational experience while I was growing up. In fact, when I was a young boy of about ten or eleven she bought me the complete set of encyclopedias and told me to read it. It was absolutely fascinating so I read it all. When I went to my grandmother and told her that I wanted to go to university she had to sign off on some consent forms, because at that time parents had to agree to your taking university programs, or else you had to take technical courses to become a mechanic and so on. And so my grandmother, as my guardian, had to sign off on these forms and before she signed them she said, ‘you have to promise me that you will get an education, and you will do something with it’.”

And so, as promised, Senator Sinclair got an excellent education and decided to use law as his tool to help people. As such, he has become a prominent leader in both the aboriginal and non-aboriginal worlds.

Robert J. Donelson, Vice-President of Laurier’s Development and Alumni Relations, explained why involving leaders with the Laurier community is vital, “The genesis behind it all was to inspire lives of leadership and purpose. We want to instill in all of our students and all of our alumni with the characteristics of leadership. When they go out in the world, no matter what they do, they will have developed leadership traits to contribute to whatever field they are working in. And so what we want to do is highlight Laurier as a place of leadership.”

The conversation concluded with a chance for the audience members to ask their own questions to the Senator.