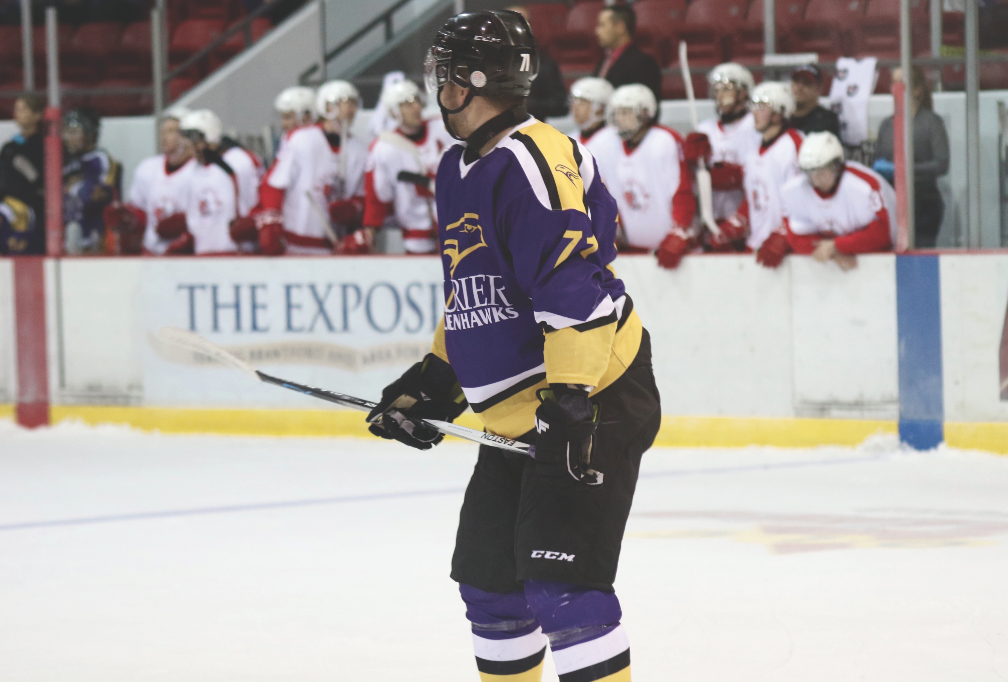 The Laurier men’s hockey team brought a taste of varsity sports to students at the Brantford campus for Homecoming on Saturday, October 24.

Having no varsity sports teams to cheer on at the Brantford campus, students took advantage of the opportunity and came to the Civic Centre in full spirit to support their sister campus.

Not only was the event beneficial for the Brantford campus, but Head coach Greg Puhalski thought it was also a good experience for the team.

“It was a game where we had good energy and it was nice to play in front of fans like we had here today,” he said. “It’s a real good atmosphere here.”

The energy played its part as Laurier took the 5-1 win over Royal Military College. Puhalski was satisfied with the way the team played.

“We did a good job of possessing the puck,” said Puhalski after the game. “We were able to create some offensive chances in their zone. We had good tensions by our defensemen and good pressure by our forwards.”

The first period ended in a 0-0 tie, but Laurier stepped up their game in the second. Only a minute into the second period, wingers Kyle Morrison and Will Cook broke free from Laurier’s end with the puck and took on a single defender in RMC’s zone. Morrison buried the rebound that resulted from a shot by Cook.

Morrison, a third year student from Mississauga, went on to earn himself a hat trick, as he scored two more goals in the period. Cook continued to play an important role as he assisted Morrison’s second and third goals. The Golden Hawks had a 3-0 lead after the second period.

RMC defensemen Scott McDonald scored a goal for his team early in the third period, but that didn’t discourage the Golden Hawks. Still in the lead, they held their confidence. It didn’t take long before Ryan Lopes and Derek Schoenmakers scored a goal apiece to cap the game at 5-1.

“We haven’t scored much this year, so that was nice to have,” said Laurier’s captain, Greg Cerilli. “Anytime we’re playing with the lead we’re up there with the best.”

Laurier was back on home ice in Waterloo the next day, but unfortunately their confidence from the 5-1 win wasn’t enough to beat the Carleton Ravens. The Golden Hawks lost 2-0. The following weekend, Laurier continued to struggle with a pair of losses. A road trip to Quebec resulted in a 6-3 loss to Concordia and 7-4 defeat to UQTR. Laurier’s record dropped to 2-5 after the weekend.

Despite the results of the last three games, the season is far from over. Playing at least two games a week with the regular season going until mid-February, the Golden Hawks have a lot of opportunities for success ahead of them. The team also has many goals that they hope to achieve.

“This year playoffs is our bare minimum,” said Cerilli. “We want to go to the OUA championship and get to the CIS finals. I think that comes through hard work, keeping the guys together and keeping the guys healthy.”

Cerilli said with a little more focus on defensive training as a team, the Golden Hawks will be more than ready for upcoming games.

Laurier plays again on November 5 at their home rink, Sun Life Financial Arena, where they will take on the Ryerson Rams.