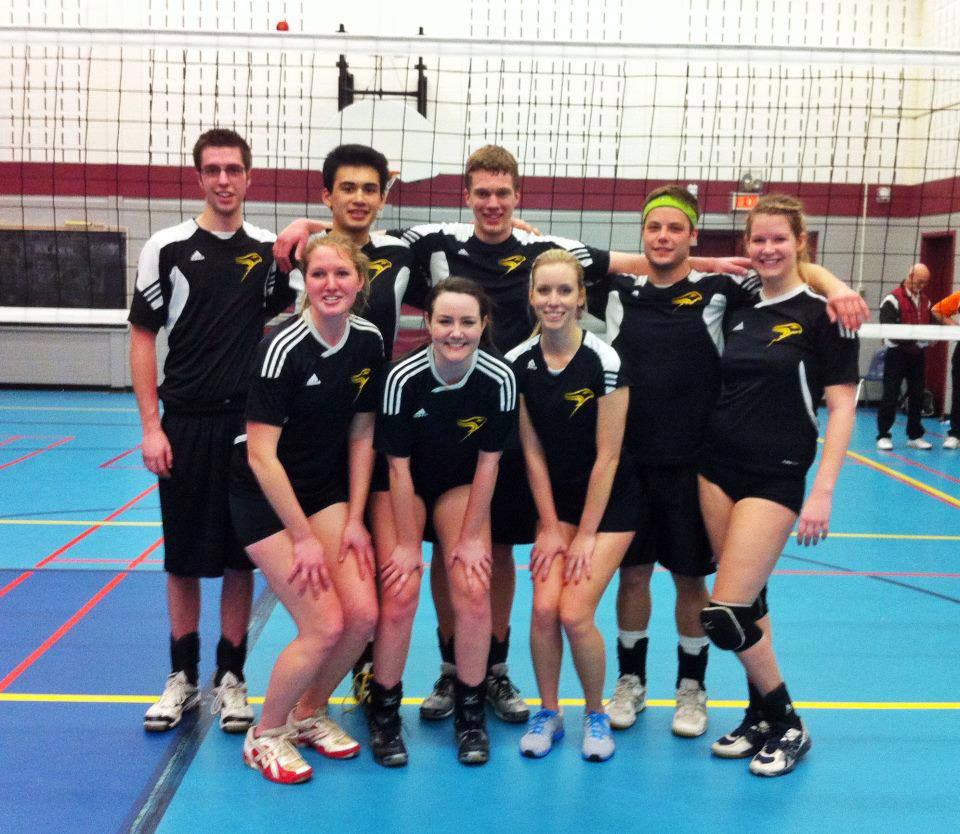 Ahead of their tournament on November 28, I talked with co-captains of the extramural volleyball team Brian Kloet and Lindsay Goudie. Both have been longtime volleyball players who continued to play the sport once they arrived at university. For Kloet, it’s his fourth year on the team and Goudie is currently in her second.

They both had similar experiences that got them into volleyball “I loved volleyball and played it all four years in high school. When I got to university I wanted to continue and play more,” Kloet said.

Goudie, who is currently in the middle of her first year as captain, was asked what responsibilities she deals with in regards to the team and how it’s run. “We organize the practices, make sure everyone shows up for the games on time as well as getting everyone to the various matches.”

Kloet added, “We are essentially the coaches of the team. But, we aren’t above anybody else. We’re still just normal players and both of us know that.”

“There aren’t a whole lot of differences between this year’s team and last year’s team,” said Kloet. “We only lost a couple players and we have a few new faces, who are first years that came out. The team is bigger this year, we definitely have more people,” Goudie concluded.

The squad will be travelling to Centennial College to take on a few teams that they are very familiar with when they enter their first tournament next Friday. “Centennial, George Brown, Lakeshore and Humber North and a couple other schools are planning on showing up as well,” said Kloet.

The captains have high expectations for this tournament. “A top two finish would be ideal. Actually, we’re going to win. We play to win and that’s we hope to do,” Goudie and Kloet said.

In order for the team to win this year a few things need to go right. Goudie made no buts about it. “We need to play as a team, have good communication and work a unit – not as a bunch of separate players who each do their own thing,” she said.

The team had a good season last year, finishing second in one tournament and third in another. They also play in a Monday night league and won it last year.

Kloet gets right to the point when asked about his personal goal this season. Simply put, “My goal is to win a tournament,” he said. Goudie took a different route and said, “It’s my first year as captain and I want to work on my leadership skills.”

Both captains know they have their work cut out for them. The college teams are going to pose a challenge and the new members need to be taught to play the same system.

Despite this, both Kloet and Goudie are ready for whatever comes their way. They believe in their team and are ready and willing to do whatever it takes to have a successful year.