How Laurier students are keeping positive and distracted during self-isolation 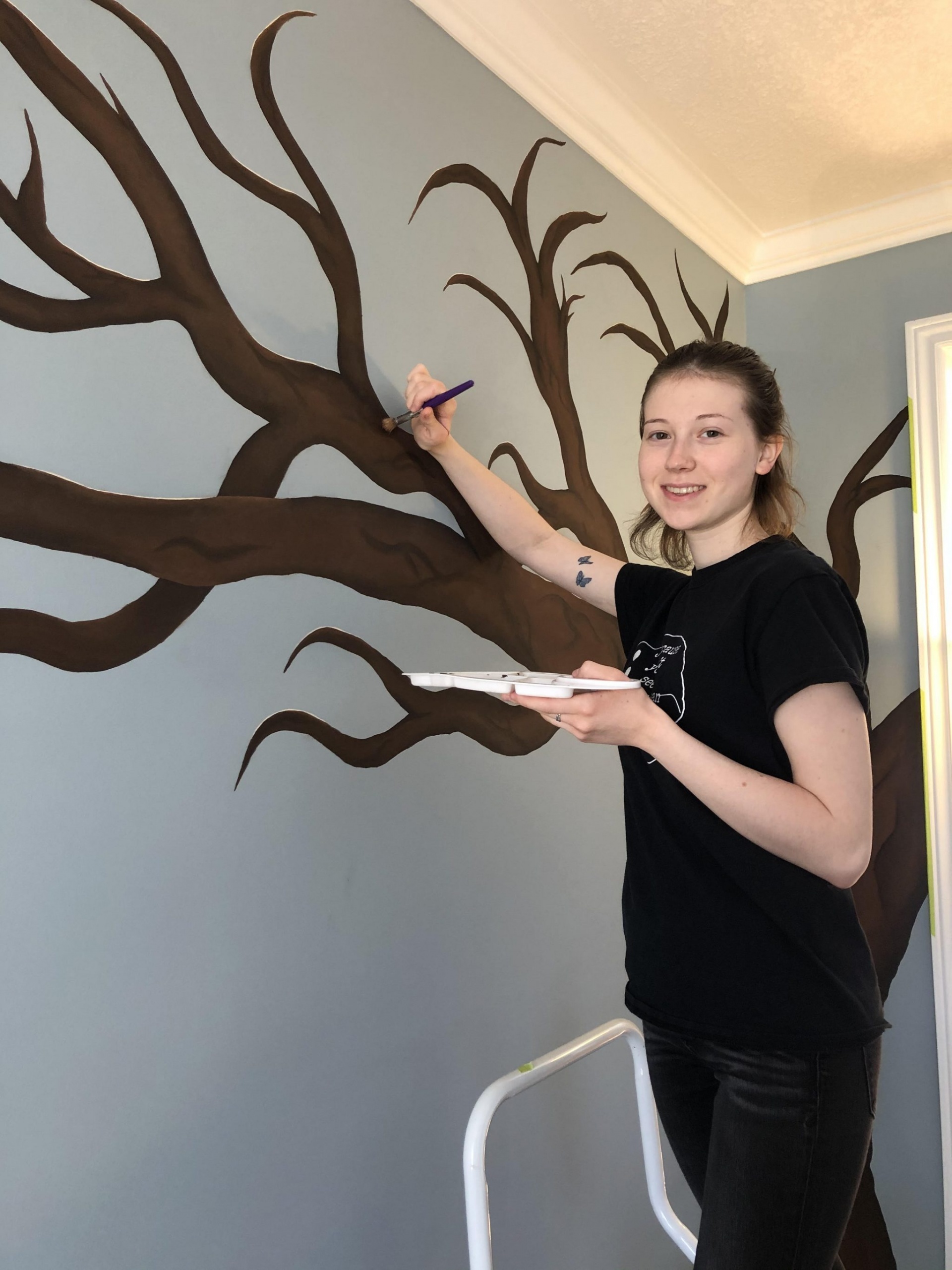 Wilfrid Laurier University cancelled all in person classes and moved everything online March 13, and much like the rest of the country we did not understand what this would mean.

That particular Friday the 13 was still before Ontario declared a state of emergency because of the COVID-19 pandemic. News about more and more cases flooded every news outlet and it seemed as though we were living in an alternate reality.

That weekend meant many students of the Laurier Brantford community started their self-isolation journey. The majority were able to head home and be surrounded by their families, but some were not.

March 18 India closed its borders to the world including their own citizens that were attending school or vacation in other countries.

Tejas Singh a second year international student from India is unable to get home because of the pandemic. Unlike many of his friends’ parents, his mom and dad had a different approach.

“Fortunately my parents were very calm and collected about the whole situation, they said stay away from any travel of any kind,” said Singh.

Singh had tickets booked to go home May 4, but instead he now waits until things have cleared. Even with being isolated completely by himself and an ocean away from his family, Singh has an overall positive outlook on his job in the pandemic.

“ When I think about it, all I really have to do is stay inside whereas there are so many other people who don’t have the money or they’re on the front lines,” he said.

After finishing his semester in the journalism program at Laurier Brantford, Singh has been occupying his time by decorating and building furniture for his barren room to give it a more “homey feel.”

“I’m lucky I don’t have to deal with any of the consequences [directly], no one in my family has been sick or struggling with money … I’m  just trying to make the most of my time, this was supposed to be my vacation,” said Singh. 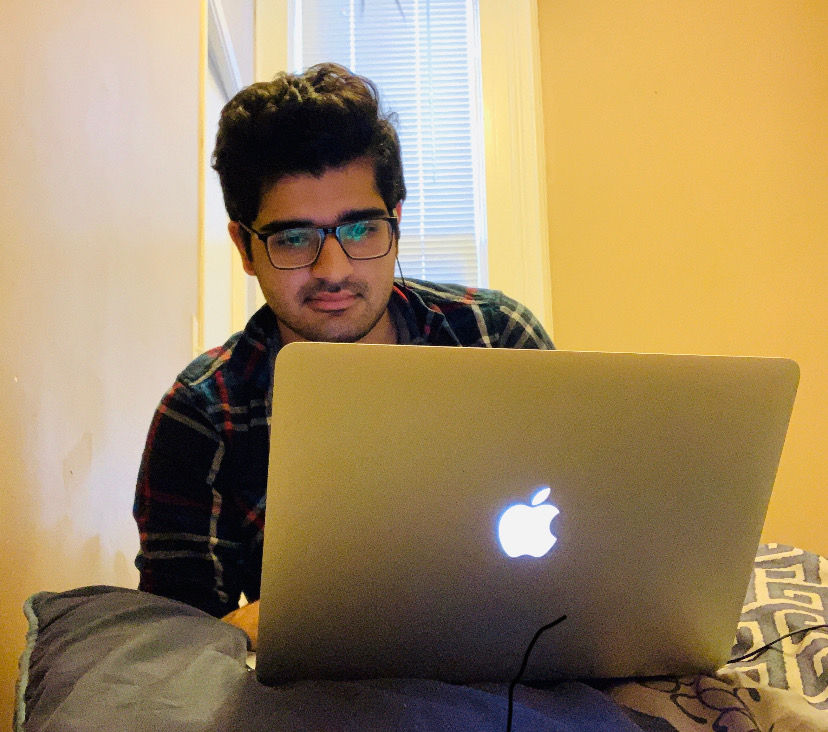 Singh has been keeping busy by himself by making his room in Brantford feel more “homey” and of course Netflix.

Other Laurier students were able to make it back home in time to be self-isolated with their families. Many of them are trying to keep busy through this anxiety induced time.

Grandy said throughout her life she’s had anxiety but she cannot remember the last time it was this bad. In the past her anxiety had been triggered by things not being perfect in her eyes, now she has realized it’s the lack of routine.

“With lack of socialization and with nothing being in control, I think that anxiety has turned into a monster,” she said.

Luckily Grandy has been able to self-isolate with her family and been able to distract herself through the month in isolation.

“Painting keeps my mind off of it so well … but here’s the thing, I can’t listen to music because the beat of the music makes me anxious, it’s so interesting seeing how my body is changing through this time,” said Grandy.

Grandy is self-isolating in her hometown of Chatham. She will be starting to work as a personal shopper at Superstore soon to help with the high demand of online groceries. 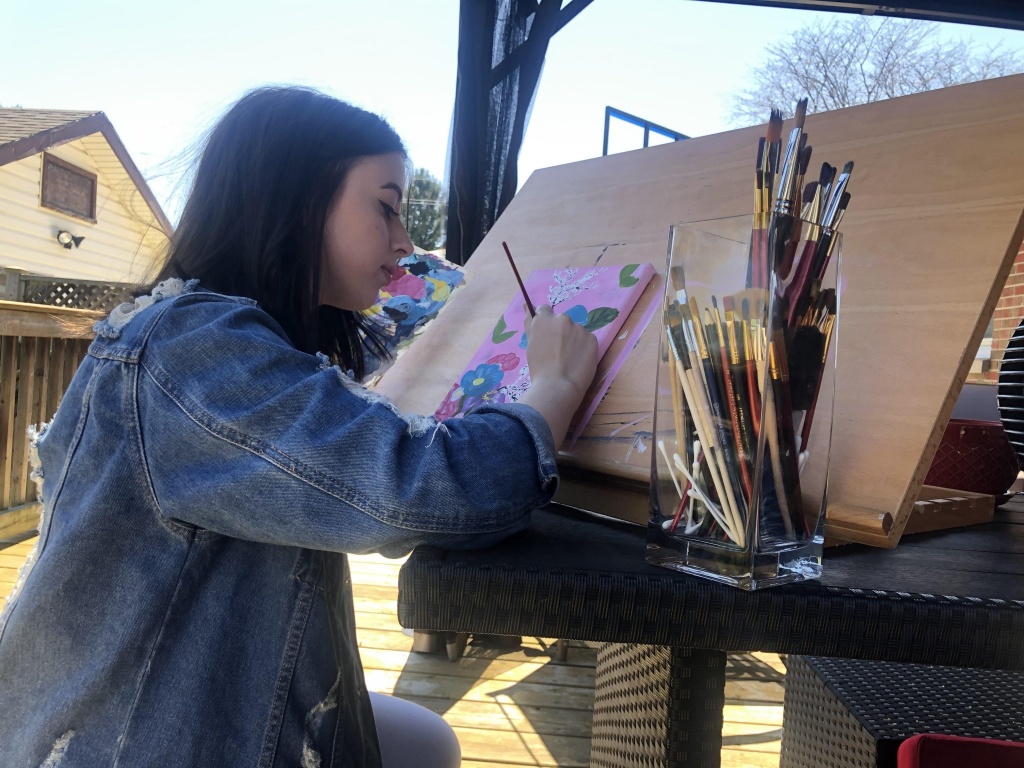 For Grandy painting keeps her distracted from her anxiety.

Anika Berringer is seeing her small community of Rockwood come together in these difficult times. The rural community has two 3-D printers that have been running 24/7 to make face shields for front line workers. Together with her mom and sister she is making ear savers; headbands with buttons to loop the sides of a mask on to prevent soreness of the ears.

“It’s almost like a dissociative state where we are watching everything play out from outside of our bodies and it just feels horrible, we’re yearning to go back to any sort of normal,” said the first year social work student.

Similar to many students, Berringer found it difficult to complete her classes online even when some professors she said were quite “adaptive.”

The hardest part about finishing school was that everyone in her family was working or doing school at the same time.

“I’ve never really been working from home in this sense, and to have everyone work from home, it was interesting to battle over bandwidth,” she said.

Once Berringer had finished school she has started doing puzzles and watching shows with her family. One of the projects she’s working on is painting a tree on their living room wall which she concludes was a “quarantine boredom” idea from her mom.

Second year criminology student, Makaila Willmore thought going home would be too distracting while finishing her year. She decided instead to stay in Brantford by herself.

“It was kind of nice to be socially isolated but at the same time it kind of sucks,” she said.

Willmore’s journey started the weekend Laurier cancelled classes, her five other roommates left later that week. She found it hard to learn through online classes and is hoping she won’t have to do them again.

“I’m someone who learns well through the lectures, having that not there was kind of difficult … it was overall decent but I wouldn’t want to do it for a whole semester,” she said.

Now that classes and her final exams are done Willmore is back home in Stratford with her parents that are both working. Instead of studying she has been trying to keep busy with Netflix and walks with her dad.

“It’s been kind of hard at times and you kind of sit there and get stir crazy, and you just want to go out and see your friends,” she said.

Students like Nataly Manychanh found it easy to text and facetime with her friends throughout quarantine.

“It wasn’t hard to make the switch to video calling and texting but it does make the interaction different,” she said.

The second year journalism student lives in Kitchener with her parents and older brother, and finds that the hardest part of quarantine is her sleeping schedule.

“My sleeping schedule has been thrown off significantly, I sleep very late and wake up very late, I would prefer to keep myself on a consistent schedule and school helps with that,” said Manychanh.

Sometimes throughout the long days in isolation she feels overwhelmed and stressed about the situation. She continues to combat that by keeping herself busy with spring cleaning, writing and planning a video call meeting for her friend’s birthday.

For many students the news of COVID-19 infection  rates can be very depressing and scary. Manychanh said she tries to focus on the happier news to keep her positive.

“I try to look at how many people have been recovered and the unique stories of the older people surviving through COVID-19 and what countries are getting ventilators made,” she said.