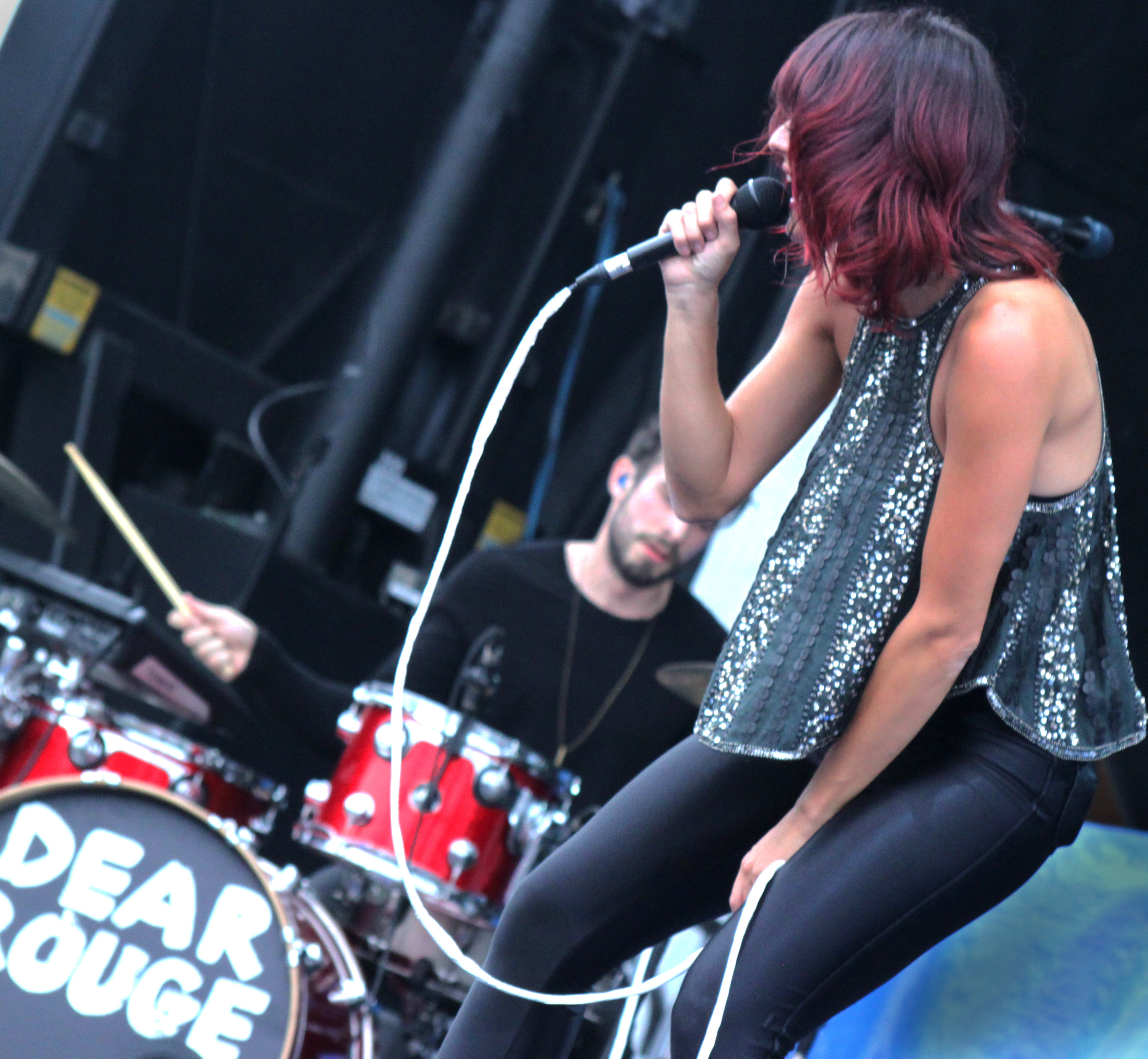 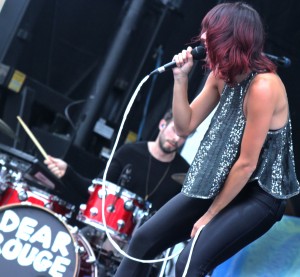 All the practice, order and professionalism that seems to go into one of their sets appears to evaporate the instant they walk off the stage. Dear Rouge, a rising band from Vancouver, have just finished performing at WTFest to a delighted crowd. Some people are singing along, but many people have never heard of this band before, yet that does not dull the performance, nor is the audience not enjoying what they are watching.

The group is comprised of a couple, Danielle McTaggart, vocalist and keyboardist, and her husband Drew McTaggart, the band’s guitarist. As groups of reporters line up to speak to them, half hour at a time, their enthusiasm and demeanor does not wane.

If their stage presence is intense, energetic, and cool, their backstage presence is laid back, goofy, and chill. But this makes sense. It is not at odds with the set we just witnessed, as joy, and warmth emanate from the atmosphere as much as from the message of their lyrics.

The attitude they carry is but an extension of how they met, and how the band came together. Mired in projects that were not going anywhere, that eventually turned around once they met through a friend.

“I heard her doing an acoustic set, like just singer songwriter stuff, and she was just cleaning up. The whole place was in awe, and she was just enthusiastic, and I was like man we have to do a more high energy thing,” says Drew.

After this, now dating, Danielle says, “ Drew kind of encouraged me, like we got to do something just for fun, don’t put a ton of pressure on yourself.”

It all starts with that – do it for fun, don’t put pressure on yourself. The path to success has endless possibilities, but as effective as any other are those that stem from encouragement, positivity and a love for the craft.

This is where Dear Rouge started. A lifetime of devotion to music, but perhaps an unease about where things were going. After the couple got married, and Dear Rouge was formed, they entered a contest in Vancouver called Peak Performance Project. They did not even think they would get in, yet this ended up taking a year of the band’s time and setting their career as a band on track.

“We played the show and then we got in. It was crazy like, ‘Oh man we need 20 minutes of music and we only have four songs. That’s not enough music, we have to like make a really long intro,’” Danielle recalls.

Indeed, when describing how far they have come, Drew mentions their first online presence came on a night, “when we were in our room and ordered pizza and launched on YouTube.” That was 2012, and the two and a half years since that have been a wild, non-stop ride.

Now entrenched as a band, and making a name for themselves across Canada, more decisions await them. Do they stay in Vancouver, or move out of town? Will they move out of the country if the opportunity arises? What songs should be on their next album?

But for now, they ride out the path based off the decisions, and songs, they have already made.

One of the group’s biggest singles is, according to them, their most unlikely to be so. “Black to Gold” is a hit in Canada, as it was in Brantford at Lion’s Park. Perhaps it is the haunting keyboard tracks and samples that has stuck with audiences. Or maybe it’s the cry of, “raising our voice together, no way we’re standing down. We won’t back down,” that has listeners going crazy. Whatever the reason, it is the perfect track for them to be known for, as the theme exemplifies the group, and how far they have come.

Described as a song about going from bad times to good times, Danielle explains the inspiration behind the song: “My old project, for me personally it was really life altering, it made me question everything I wanted and believed and everything, and from there this was very redeeming in that way because I didn’t really think that it was gonna happen for me, and it was really tough.”

This is the message that one takes away if they are fortunate enough to watch Dear Rouge perform, let alone get the opportunity to hang out with them.

As Danielle reflects on their journey, she is visibly thankful, as she says, “for me this whole thing has just been so cool, whatever happens from here were both just really grateful-” and then she is instantly distracted, looking out the window at the crowd getting pummeled with rain during a USS concert. “This is so crazy, these poor people!”

And the night goes on, and this fun, talented, surprising band, goes on as well, being grateful for how far they’ve come, and looking forward to where life takes them.