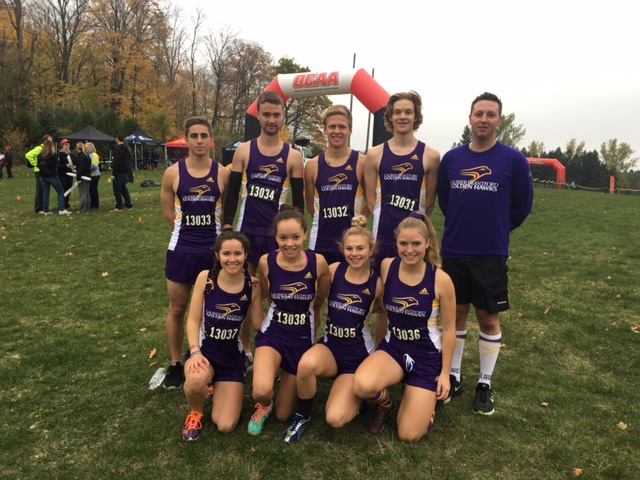 Mahayla Markell had another great performance at the OCAA Cross Country Champions, as the Golden Hawks were solid throughout.

Markell was excellent on Saturday, Oct. 29, as she finished the women’s race in 23rd place, with a running time of 24:09, in the cross country team’s last race of the season.

This came after a 19th place finish just two weeks ago, both coming at King City’s Seneca College.

Markell wasn’t the only runner for Laurier Brantford that finished well, as she was one of four women participating in the event.

Coming in at almost a minute behind Markell, Jessa Braun finished in 36th place, taking only 25:10 to complete the race. Like Markell, it was a bit of a drop off from her last race, which saw her place 23rd.

It didn’t take long for another Laurier student to cross the finish line, as Sarah Maier finished in 42nd with a 25:41 running time. Nakita Dostie concluded the race for Laurier, finishing 86th and completing the race in 29:46.

Simon Crowley led the way for the Golden Hawks men’s team, as he was 53rd in just 32:25. Crowley, who missed the first race at Seneca, saw an improvement from his 67th place finish in his last race.

Craig Van Manen finished shortly after, completing the race in 33:26, good for 64th place. Manen led the way for Laurier in the last race, as he had finished that race in 73rd.

Michael Butler and Curtis Madden seem to enjoy each other’s company a lot, as for the second time this year, they crossed the finish line together. They gave the edge to Butler, as he finished in 93rd, while Madden finished in 94th, but they both completed the race in 36:01.

It was a slight drop in the standings for both racers, as Butler finished the Oct. 15th race in 87th, while Madden placed in 90th.

The entire team could potentially return as none of them are seniors.