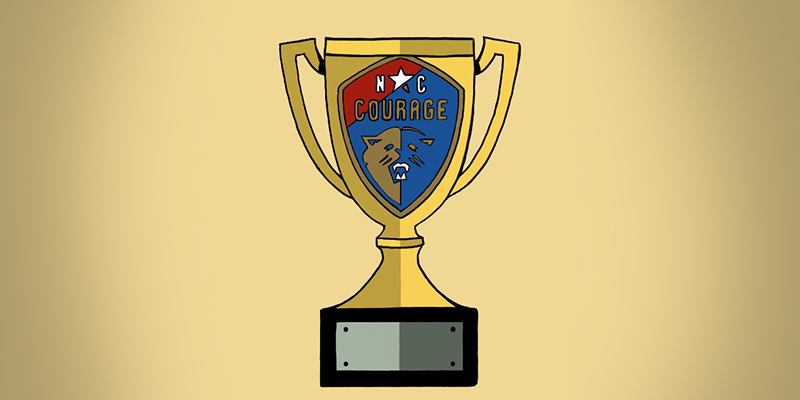 The 3-0 victory led the Courage to being the first NWSL team to win both the championship title and the NWSL shield in the same season.

The match drew in a sell-out crowd of 21,144 – the largest audience at a professional women’s soccer game in American history.

The Thorns have a strong roster that holds well-known players such as Christine Sinclair (captain of Team Canada), Lindsey Horan (Team USA) and Tobin Heath (Team USA). The Courage roster includes star players as well, such as Sam Mewis, McCall Zerboni, Lynn Williams, Abby Dahlkemper (all from Team USA), and Abby Erceg (Team New Zealand). However, North Carolina’s main advantage is their team is powerful as a unit and they really know how to connect as a team.

Two of the Courage’s goals were all thanks to Jess McDonald, who was named Championship MVP. She led the league in assists and scored 10 goals this season. Being a mother while taking on life as a professional soccer player makes her accomplishments even more impressive.

“I think her commitment to putting soccer first has been really admirable,” Mewis told NWSL reporters. “Jess has a family, she has a lot of other things going on in her life, and for her to be performing this well is incredible. The rest of us, this is our number one priority, and she’s like, FaceTiming her kid on the bus. And I think that for her to be able to do both is such a huge accomplishment, and it’s a sign that anyone can do anything, and I think we all really admire her commitment to the team and her commitment to her family as well.”

Combined, the Courage and Thorns swept up a number of the major league awards.

Club officials, players, media and fans voted on giving the title to Lindsey Horan. Over the course of 22 regular-season games this year, Horan played 1,980 minutes, scored 13 goals, and led the league in total touches (1,852) and duels won (297). Horan is the first MVP to have not won the Golden Boot in the same season – Sam Kerr was given that title.

Abby Erceg was one of five NWSL players to play every minute of the season. She played a crucial role in helping the Courage set the league record for fewest goals allowed in a season. The captain made 110 clearances, won 19 tackles and won 116 duels. She even headed in a couple goals and made two assists.

This is the second straight year Adrianna Franch has been titled Goalkeeper of the Year. She had to miss nine games this season due to injury, but nevertheless came back to help her team jump into a second-place finish after having a slow start to the season.

After leading a team that broke countless league records in one season and went unbeaten on the road for the entire year, there was no other coach more fitting for the award. Voted on by fans, owners, general managers, coaches, players and media, Riley has now won the award two years in a row.