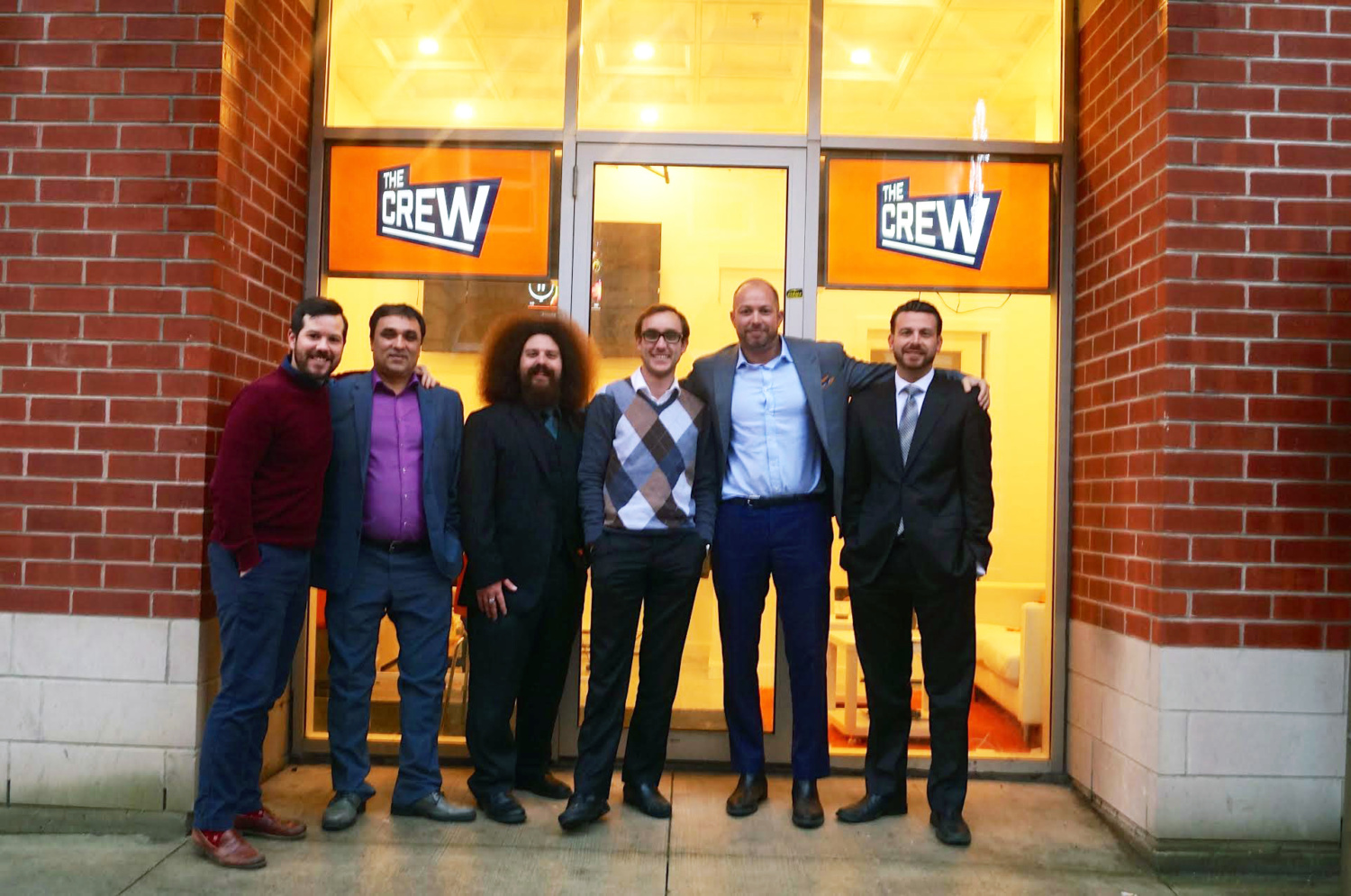 Brantford’s downtown is home to a wide variety of shops and small businesses. These businesses define Brantford, but what defines the businesses? This is the inspiration behind “Clerks”; getting to know those who know us so well. From our shoe size to our favourite item on the menu, these business owners make us feel more like family than customers. With that being said, let us shine the spotlight on the members of The Crew Real Estate.

What exactly is The Crew?

Josh: The Crew Real Estate is a real estate agency. We work through Sutton on Morton Ave. and we expanded to open up an office down here so we could be closer to the core of the city. We wanted to bring a focus on interacting with the community in more than just buying and selling homes. Our agents are always out and talking to people in the community and they’re talking about how great Brantford is. We’ve got a great arts and culture scene, music, comedy, all sorts of different events that are run. Ryan, our team leader, said “why can’t we be doing that?”. So he reached out to James and I and said, “I’m going to be expanding my crew, could you help me get in touch with the community and running events.”

How did The Crew come together?

Carson: We’re at about The Crew version four right now. We started with [Ryan], but it wasn’t really a crew at that point because it was just him. Then I came on and it was the two of us for about six months, then Kiou came onto The Crew. The three of us were The Crew for about a year, and after that the three of these guys came on recently.

Josh, you’ve worked with BScene in the past. How has that influenced what you bring to The Crew?

Josh: James and I own our own company, Murky Productions, who is contracted by The Crew. Both of us worked for BScene and one of the things that was incredible about working for a community publication was that we got to make these incredible relations with local business owners in the city. To give a prime example we recently did an open house in Woodstock and we wanted to bring a bit of Brantford with us. We went to a local brewery, we had them prepare the beer for us, they gave us a ton of merch: bottles, bags and t-shirts. We then went to Strodes and they gave us an awesome meat and cheese tray. We were able to bring a bit of local Brantford cuisine and fare out to Woodstock. Working for the paper helped me facilitate these relationships and helped me keep my finger on the pulse of the community.

Ryan: I that’s why Josh is on The Crew, because he has that infrastructure in fundraising. He’s able to pick up the phone and call people straight away.

Who are some local businesses that you haven’t worked with that you’d like to work with in the future?

Josh: Who would we like to see? Personally, I’d like to see more corporate support. I feel like you can pick up the phone and you can ask any local business owner in the city to do a good thing and chances are they’ll say yes. So I don’t want to single anybody out by saying these are the ones who’ve been supporting us because I haven’t picked up the phone and asked for help from a business owner who said no. But it would be cool to see more corporate entities because they’re the ones with the bigger cheques. I wouldn’t even necessarily say that we’re looking to deal with the big corporations. We’re actively working with local businesses, to support local businesses and I feel like they’re supporting us as well.

I’ve noticed that the Brantford business owners have close relationships with each other and create a family vibe. How does The Crew fit into this family?

Josh: We’ve been welcomed with open arms. Half of the businesses around here dropped off flowers for our office. We go over to The Works, to Devlin’s Advocate; over at Admiral’s they say Ryan is their number one customer. They’ve all been super welcoming. We’re extending business to them and they’re actively referring and sending business back to us. And supporting our events! On Crew Year’s Eve, we had like 30 businesses donate gift baskets, spa getaways, blankets, pictures, it’s hard to name them all. When we asked the community to support us, with the warm embrace of a grandmother’s hug they did. It was incredible. Totally flattering.

Josh: James and I have been doing a promotional video series called, 52 Things To Do In. We did it in Brant and Waterloo. The emphasis of that series is to promote the events, businesses and locations within the community. Ryan had seen some of our work, and one of the reasons we joined The Crew was to promote all of those things. The social media stuff that we do is engaging social media posts. Giving an opportunity to have people actively involved in things like live streaming the event on Facebook, promoting it with pictures, promoting it with engaging posts that get people to comment, like and share with the community the cool and incredible things that we’re doing. That’s something that James and I are bringing to the table through Murky Productions.

The Crew emphasizes how they do real estate differently. Are you worried about the competition copying your style?

Josh: We would be flattered. A friend of mine said to me, “Can you imagine the stuff The Crew was doing impacted the way real estate was done?”. Imagine if every real estate agent in this city was giving back to community, how incredible it would be. Imitation is the sincerest form of flattery, we welcome anybody to imitate what we’re doing.

Where do you see The Crew in five years?