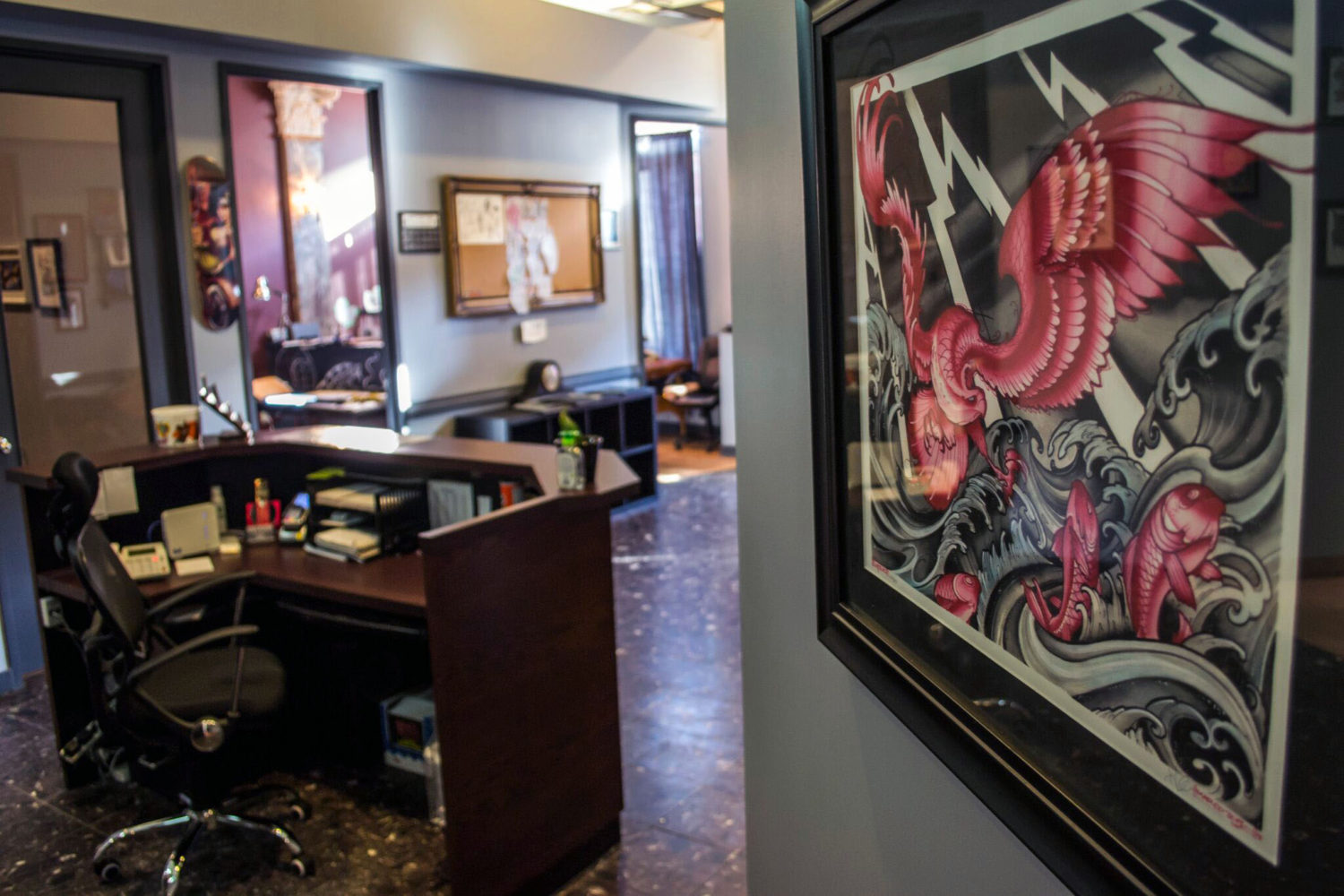 Brantford’s downtown is home to a wide variety of shops and small businesses. These businesses define Brantford, but what defines the businesses? This is the inspiration behind “Clerks”; getting to know those who know us so well. From our shoe size to our favourite item on the menu, these business owners make us feel more like family than customers. With that being said, let us shine the spotlight on Billy Annand, owner of Deep Water Tattoo.

What made you want to open up a tattoo parlour in Brantford?

I’ve tattooed here all of my life. I did my apprenticeship in this town, I was in Kitchener for about six months, but it was lucky circumstances. All the guys we work with wanted to do it and this building became available. It was no ill will towards any shop I’ve worked for before, it’s just all the perfect things lined up for us.

When did you guys open up?

How’s the response been since you’ve opened up?

It’s been awesome; we thought there was going to be a bit of a drop off but all of our appointments have stayed the same and we’ve actually gotten busier since we’ve been here.

What separates Deep Water from the other tattoo parlours in town?

We just do the best we can. Dave down at (Kreative) Khaos, he’s the one that apprenticed me. Steve, over at Bold and Bright, we’ve worked with him before, and he’s also one of BJ’s really good friends. Basically we just want to do good tattoos, we’re all custom, we don’t have any flash on the walls; just things that we’ve drawn by hand. Other than that we just want to elevate tattooing to something better in Brantford. And have fun doing it.

You mentioned you were heading to Ottawa for the weekend to do some tattoos. What’s happening in Ottawa?

It’s the Ottawa Tattoo Convention, they have it every year. This will be my first year going but I’ll be working there for four days.

What’s the setup of the convention?

You have your booth and you set up. Some guys book appointments, but I usually don’t book appointments for conventions, I just bring a bunch of drawings, put them out and take walk-ups all weekend. There’s only about 200 artists at this one; Toronto’s is bigger, it’s like 300 to 400 artists. We did Toronto this year and it was good, it was a lot of fun. I usually go to the states for conventions.

Why go all the way to the U.S. for conventions?

Speaking of the U.S., how do you feel about Donald Trump being elected president?

It wouldn’t have been my first choice; a lot of my friends, not their choice either. But we have to make the best of what we have. With me going down, I just hope I can still get down there depending on what he does but hopefully he does alright. Got to hope for the best and plan for the worst.

What’s your favourite style of tattoo to draw?

I don’t really know what to call my style, new school or neo-traditional; kind of a mix of that. Sometimes a little bit of realism in there. All those styles I bring together, depending on what it is. I’ll tattoo anything that doesn’t have a face; like, I won’t tattoo human faces. I tattoo pieces of pie, railroad spikes, I do a fair amount of skulls. Animals, stuff like that.

How do you feel about shows like Ink Master?

They’re alright, some of my friends are on this season and some of my friends have been on past seasons. When I was getting my thigh tattooed in the states, I was hanging out with Kelly Doty, who’s on there right now. They are totally different people than what you see on TV. They take three days of filming, and crush it down to five minutes of competition. So it’s different in that aspect but the actual tattooing, it stresses them out a lot. A lot of them are better than what you see on TV.

What advice would you give an aspiring tattoo artist?

Make sure you want it. Just in the last two months, six shops opened in Brantford alone. If you don’t keep up and keep evolving, then you’re going to get left behind. And don’t do this to get rich, because you won’t.

What are some of the difficulties of being a tattoo artist?

People see a tattoo that I spent three or four hours on here, but don’t see the two or three hours I spent on it after I put my kids to bed. Or the four hours the night before that; staying up until two, three or four in the morning getting it right or waking up early and then keeping working at it, until I get it how I want it. It’s hard, especially with family life, my wife and kids. The social aspect of it, because you have to attend functions that are away from work. If you make it all about work all the time, it gets crazy.

Who are some tattoo artists that people should check out?

It all depends on what they are looking for. My friend Chris Hess, down in Kansas, he does awesome realism stuff. Anybody at the shop, check them out. My buddies down at NiteOwl tattoo, they’ve always taken great care of me. They’ve tattooed me twice: Timmy B did one leg and Lindsay Baker did my other one. Dave Tevenal is probably the hardest working person in tattooing right now. He’ll crank out a painting the size of my TV. in one night, after tattooing for a full day. I have a marker drawing he gave me, and he did it while waiting for a ride at the airport in Toronto.

How do you feel about tattoo trends? I’ve heard that tribal tattoos have a bad reputation with tattoo artists.

As long as it fits the body right, it’s alright. I prefer not to go near stuff like the paragraphs of words; I like to take writing and break it down into a sentence. I’ll tattoo basically anything. If you want me to tattoo it, I’ll do it. But if they’re going to try and make something ugly, I’m not going to do it. I’m not going to put something bad on someone like that. You can’t fit ten pounds of shit in a five pound bag. Tattoo trends come and go, you’ve just got to try and make them the best you can and try to make them unique because even though it may not be for me, it means something to the people that get them. Like I can’t picture a lot of people getting a Benjamin Franklin on their thumb, but I got one.