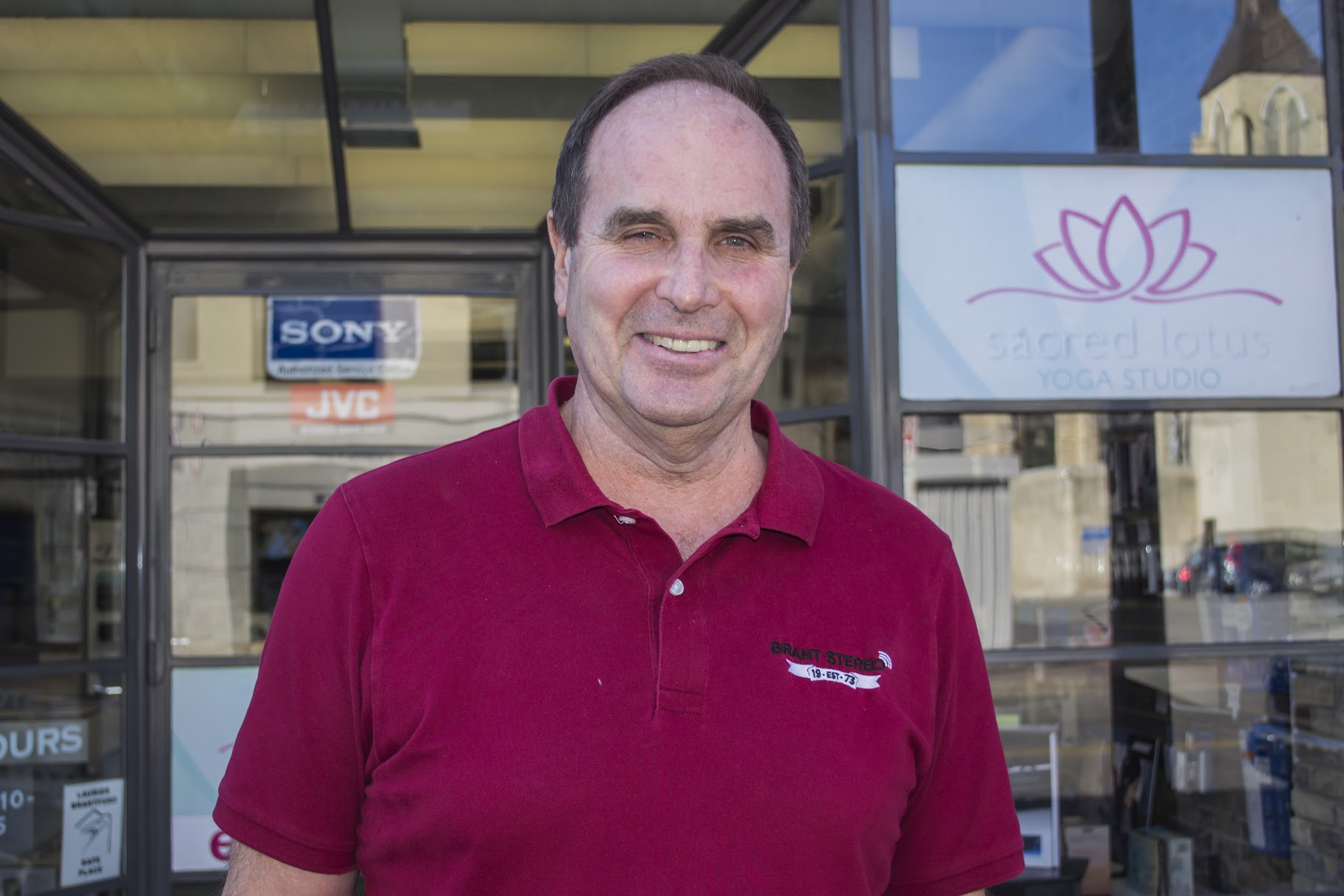 Brantford’s downtown is home to a wide variety of shops and small businesses. These businesses define Brantford, but what defines the businesses? This is the inspiration behind “Clerks”; getting to know those who know us so well. From our shoe size to our favourite item on the menu, these business owners make us feel more like family than customers. With that being said, let us shine the spotlight on John O’Neill, owner of Brant Stereo.

For those who don’t know, what is Brant Stereo and what are you guys all about?

It’s a consumer electronics retail store that’s been in the downtown core since 1973. I opened up on October 6, 1973 which coincided with the first day of the Yom Kippur war, which led the Arab oil embargo, which led to a big recession. Not the most appetizing time to open up, but when you open up a business and you immediately enter a recession, that becomes your norm because you don’t know anything different.

So you guys have been around since 1973, what changes have you seen around Brantford since you opened the shop?

Well, when I opened up there wasn’t really a north end. The north end you see today didn’t exist. I was 21, so when I was in high school, the south side of Memorial Dr. existed, and the north side of Memorial Dr. was a cornfield all the way to St. George Road. That’s where the city ended basically. The downtown in particular, it suffered, I think, significant mismanagement from the city councils of 1979 to 1985. If you go onto Colbourne St. today, you notice that they have extremely wide boulevards and sidewalks. There’s really little in a way of parking available over there. That was all a result of the bad planning by the city.

Brant Stereo is located near a number of campus buildings, and lots of students hear the music that comes from the shop. What made you want to start playing music on the street?

We’ve done that since 1973. There was no one playing music on the streets and people liked it.

Have there ever been any complaints?

I’ve had two complaints. One fellow, who was a bit odd, said that I was being, “Satan’s surrogate,” by playing music on the street; I didn’t take him seriously. I don’t know what band was playing. There’s a playlist going right now and it’s all on Spotify, it used to be on cassette at one point. When you put a playlist together you’ve got to take the songs with explicit lyrics out of the playlist. So Tupac’s “California Love” is going to be the censored version. Another fellow, I believe he was someone with the university and that he was a part-time professor said the music was disturbing his mood or something (I didn’t quite understand where he was coming from) and I infringing his lifestyle. I was a little miffed by it, because I find it really funny since one of the most popular playlists that I play is the Beatles playlist. I’ve got students going by, literally it’s not unusual, to be singing along to a band that broke up 25 years before they were born; yet they know all the lyrics. We kind of giggle about that. Students come back that graduated eight or nine years ago for Homecoming, and they’ll come in. One person even calls it the “Beatles store.” Two people in 43 years to complain, I wish I was that popular with everything I do.

If you could have any piece of technology from the shop, what would it be and why?

Probably the new High-Res audio player from Sony. Most of these devices have audio systems, smartphones, etc. I mean, it’s a crappy audio system; the audio output, the soundboard sections inside phones are pretty chincy. So these devices from Sony, they cost about $1,200 but they sound like an extremely high end audio system and you can use them not just with headphones, but with the new network audio speakers that you can get. So you plug it into the wall, put it into your network and pull it up on your phone and away you go. But, if you use one of these High-Res audio players as your source, they all sound way better. Everything you use with that High-Res audio player sounds better. You take it, and use it in your car stereo; sounds better. So, it’s a pretty top-dog product.

How do you feel about the growth of Laurier within Brantford?

As far as the university goes, it had a problem in 2006. 2006 was a watershed moment because at that point, there were a number of counselors that were openly saying that the city should not give the university any more money or support; that they should do it on their own. I disagreed with that. So what happened was I wrote a letter to the editor of the paper, essentially expressing my opposition to the concept and it was a danger, because there were three or four of them, and if you get a couple more they can do serious damage. If it gets enough votes, the worst idea will still pass. So I spoke up about it, and then there was an issue with Harmony Square, and the developer knew my feelings and they were doing a grand opening for the square at the time; they had the mayor there and a few other people. So [the developer] came over and asked if I would like to come and speak. I looked at him and said, “You know what I think. You’ll know what I’ll say.” He wanted me to say it. So I made him a deal; I’ll make the speech but put me on last. No one is going to want to speak after I’m finished. So he put me on second, and no one wanted to speak after me. It made a big front page story.  After that, I had a number of people that donated money. I did a sign that pretty much said my opposition to the counselors. 2006 was an election year so I spoke up in opposition to some of the counselors. Leo (Groarke) took the picture of the sign and put it in his book. If you talk to him today, it turns out he has a picture of that sign in his office today. So do I support the university? Yeah.