Canadians should care about the US election 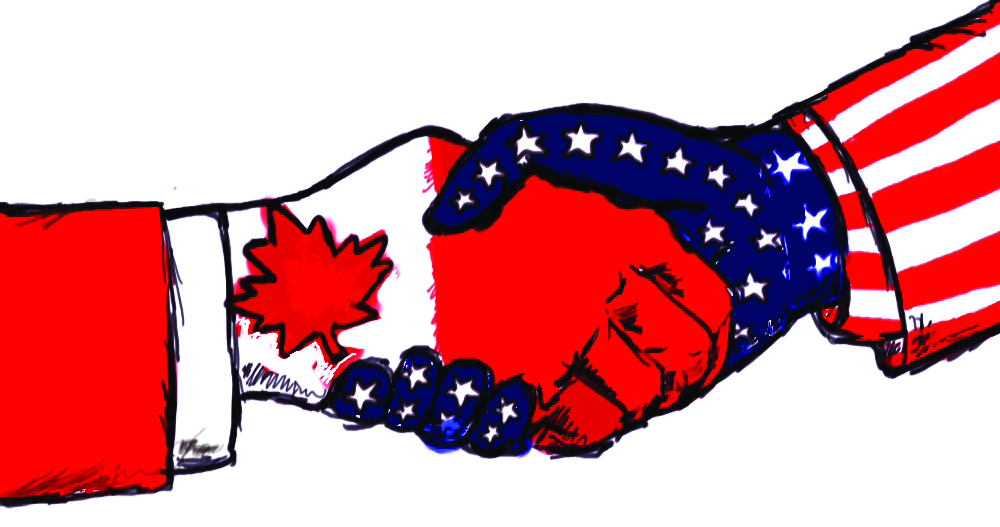 I have to start off by confessing that I am not an expert on politics by any means. I know surprisingly little about how the United States government functions, and only slightly more about how our own government functions. But, as a maturing adult, I have a growing interest in government policies and practices, and I strongly believe that my peers should feel the same way.

Obviously, everyone is aware of the US presidential election that happened a few weeks ago. Twitter and Facebook were flooded with posts glorifying one candidate – or, more often, bashing the other. I know some people were frustrated by what they viewed as everyone jumped on the political bandwagon and supported one candidate or the other based on uninformed opinions. Regardless, everyone seemed to have an opinion one way or the other about the American election – but should Canadians even care about whom is in power in the US? It’s not our country. Shouldn’t our focus be on our own government?

Personally, I think Canadians should care about the American government. For starters, we have an extremely close relationship with the US on several fronts. The United States is Canada’s largest trading partner, exchanging more than $1.7 billion worth of goods and services across the border every single day, for a total yearly trade of $645 billion in 2010. This means that our economies are heavily dependent on one another. If the US economy takes a turn for the worse, Canadians are in trouble too. If the US isn’t buying Canadian goods or isn’t producing enough of their own goods to export to Canada, the Canadian market and resulting profits will suffer. People lose jobs and can fall behind on financial responsibilities such as mortgages. I work as a camp counsellor during the summer and when the economy was at its worst, fewer kids were enrolled in camp because families couldn’t afford it, meaning that the company wasn’t able to hire as much staff. This is one specific example, but when overall job shortages in Canada become an issue due to a faltering economy, Canadians will recognize the need to care about the US government.

Secondly, because our countries are so close geographically, anything that is close enough to be a threat to the US is also a threat to Canada, including a number of environmental issues. Canada and the US have signed many agreements in the past surrounding environmental concerns such as protecting migratory birds, safeguarding   Great Lakes’ freshwater, and setting goals to reduce pollution and damage to the ozone layer. On any issue, ranging from pollution to national security, if it affects the US, you can be sure we’ll feel the impact in Canada too.

The Keystone Pipeline project becomes increasingly relevant and controversial with the environmental issues facing North America. Most recently, the devastating effects of Hurricane Sandy were a top concern, and many believe that the increasing frequency and severity of hurricanes can be attributed to climate change. If it comes to pass, the Keystone Pipeline will release more greenhouse gases into the atmosphere, which is a major reason why it has not yet been approved. The project has been given the go-ahead by the relevant Canadian agencies, but President Obama rejected the proposal earlier this year because it needed more environmental review. Governor Romney promised that approving the pipeline would be one of the first things he would do if he won the presidency, showing little regard for both the Canadian and US environmental landscape in this specific case. In a time when natural resources are becoming increasingly scarce and therefore increasingly precious, shouldn’t we consider reducing our sales and saving our resources? In my opinion, the health of our planet in the long-term is more important than making money.

As an environmentally responsible generation, I believe that we should all have some concerns about this pipeline. Globally, we are constantly searching for more efficient and environmentally friendly sources of energy, and I don’t think that we should embark on such an expensive project that will have serious environmental consequences for the future. The Keystone pipeline is estimated to cost $7.6 billion – can the US or Canadian economies really afford this? The US has a multi-trillion dollar debt load and is still choosing to invest a huge amount of money in a system that doesn’t necessarily need to be fixed. We already export oil to the US; the pipeline is simply a different way to do it.

Due to this case study, and many others, it seems we should all have a vested interest in the political activities and government policies of the United States. Although we don’t have a say in electing their president, we still need to be aware of the consequences of the projects proposed, and the people in power, especially when they relate directly to the Canadian economy, job market, and the health of our planet.