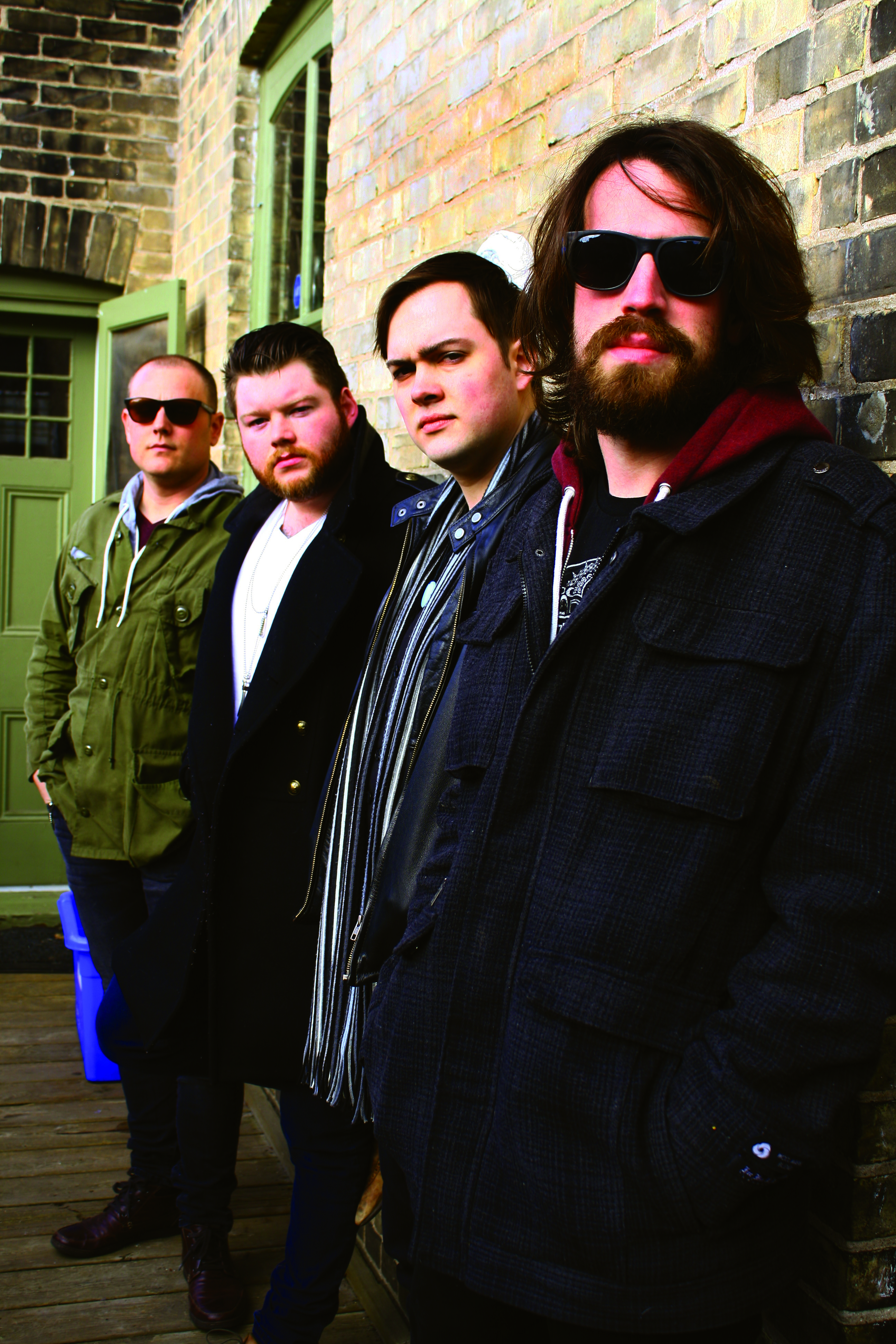 Sons of Revelry is an infant band in the music industry, but in the past 10 months as a group, they have been making waves in the North American music scene. The group started by complete happenstance last May and has evolved to include lead singer Toby Black, bassist Arron James, guitarist Corey Brouwer and drummer Sean Boyle, who has won a Hamilton music award. The quartet have since landed a recording gig at NRG studios in Hollywood, whose client list has grown to include such artists as Jimi Hendrix, Beck and a whole whack load of other brand-name musicians. Listening to their music, it is not even slightly apparent that this is a new band. Their sound is sophisticated and established, something that usually takes years to accomplish. Thankfully, I got the opportunity to chat with Toby and Arron about everything from fatherhood to Hollywood, and learned along the way that Brantford’s music scene is much more active than I had previously believed.

Sons of Revelry is an extremely young band, how and when did you guys all get together and make this happen?

Toby: We’ve been together since May, I think. May as Arron and myself, and Sean, the drummer, joined probably within our first month of being together. We recorded our first demo EP after being together for like a month.

Arron: Yeah, that was on your birthday right?

Toby: Yeah, June 10th. And then Corey, who is the guitar player and backing vocals, he joined us about 4 months ago. So yeah, in the grand scheme of bands and musicians, we are extremely young. And it’s kind of serendipitous how it came about. I was just starting to write music again… and we were in our local music school here in Brantford, and I was telling the owner that I wanted to start a band and we needed a bass player, and Arron works with UPS as a driver and just as I was saying this and telling the owner I needed a bass player, he was like, “Hey this guy plays bass.” And then we connected and we jammed, and it was awesome.

Arron: Yeah, that happened exactly as I was walking in the door, which was pretty rad.

Toby: Yeah, he was just delivering a package and it was pretty crazy. Sean had another local band that he was playing in for a long time. Then he just got fed up, burnt out, whatever happened. And then Arron messaged him to see if he’d like to come jam, and he actually came and jammed. I think it was once, twice maybe…

Toby: Just once. And then we went into the studio and recorded a 3 track EP. And then Corey was actually playing in another band for 3 or 4 years in Hamilton and he was getting fed up with that. He saw our band and he reached out to us and said, “Hey, I know you guys are looking for a guitar player, let me come and jam with you guys, I know I can bring something to the table.” And he did.

So you’re heading to Hollywood, how did you land that? How did you score a recording gig at NRG?

Toby: There was a competition, a Battle of the Bands partnered with Uproar Music Festival and it’s a big Battle of the Bands, it’s international. The publicist we were working with at the time mentioned it to us that we should apply, and we did. We were so lucky to have support from everyone here in Brantford and Toronto voting for us everyday. And they pick the best hundred, and they then chose one band to perform at the local market. There were like 30-something stops across North America and they chose one band from the competition to play each stop for the competition. We won that, so we got to play the Molson Amphitheatre in August. Then I got phone call in November, saying that we had won the whole thing. It was pretty surreal.

What kind of fundraising are you doing?

Toby: Once we found out that we won, we lined up shows and we’re saving for it that way. We’re all making sacrifices in our life so we can have extra money that we can go down there with. Luckily the studio time was paid for and the tour that they have us on from the beginning of August until the first week in October, it’s a paid tour, so we’ll get funding for that. But basically, we’re trying to work our ass off as a band, trying to get as much money together as we possibly can… and then hopefully get some funding from one of the Canadian government agencies.

Toby, you have a wife and baby… are other band members married with kids? How do you balance fatherhood with rock stardom?

Arron: It’s a delicate balance. I’m a married man with a kid too and a 50-hour-a-week job. It’s just about making the right choices and being passionate about what you really want to do.

You said your sound is like a 60’s music festival? Are you inspired about this era, if so why?

Toby: I think people were on a different wavelength back then, especially in the music world. It was all about experimenting and doing things spontaneously. It was a lot of feeling, a lot of psychedelics, a lot of good things that you could use to alter states of mind. So when you brought that into an art form like music, it just created such epic experiences for people. And today’s music, everything being so compressed and cookie cutter, we don’t want that. Music isn’t about being perfect. Beauty is in imperfections.

Are you trying to alter people’s minds with your music?

Toby: We don’t try to do anything. We just do. We just let out whatever is going on in our heads, in our minds, our hearts, and our lives and our souls. When we come together we just play, and whatever happens, happens.

Arron: It would be cool if we were on the radio and we were the soundtrack for someone’s experience, like a psychedelic experience.

Arron: Well I know Sean is heavily into Canadian bands. If you ride in his car, you’re bound to listen to things you may not like, but it’s going to be 100% Canadian content.

Arron: But the Sheepdogs and the Trews, they’re pretty rad. You picked out all the bad ones first!

Arron: No, we were just fucking around.

Is the Brantford music scene more live than I think it is?

Arron: I think Brantford is swimming with talent. Half the time it’s winter, so people are inside playing their instruments.

Toby: Two Doors Down has live music every night of the week…

Arron: It’s the hub for people expressing themselves. It’s terrific that they provide the venue for people to come in and do what they want to do.

Toby: It’s not like Hamilton, where they have a few spots where they are really eagerly promoting the local music scene. Brantford has the talent, musician-wise, but it seems it doesn’t have the support through writers, or wannabe writers, or bloggers, or promoters, or other people in the industry who are important for making a scene a scene… Brantford definitely has the talent; they don’t get the exposure they deserve.

If you could tour with any musicians or bands, dead or alive, whom would this magical tour include?

Toby: Hands down, without a doubt, it would for sure be Jimi Hendrix.

Just you and Jimi Hendrix, that’s it?

Arron: No way, you need to get Frank Zappa on the bill, Pink Floyd, the original Led Zeppelin, you know, The Doors, fuckin’ eh.

So 60’s musical festival and Sons of Revelry, basically.

Toby: Arctic Monkeys, that would be pretty rad too.

What comes next for you guys?

Arron: We’re just going to keep working hard everyday. We’re gonna practice our instruments and then through the summer we have this great opportunity to travel through the United States. It’s kinda like we’re training for the Olympics… as soon as we get back from Hollywood, we’re just going to continue doing that and writing and progressing. Whatever comes, comes. We get to play on the Vans Warped Tour for a couple dates, so that’s pretty cool.

Toby: The company that puts on Uproar Music Festival is the same promoter that puts on Warped Tour, so the festivals are pretty huge.