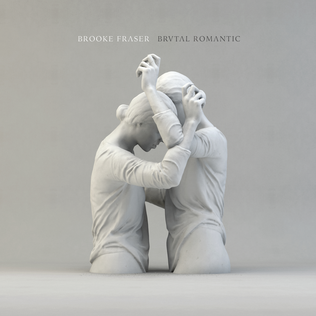 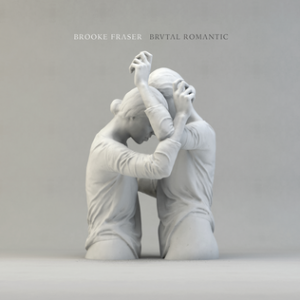 When I think of Brooke Fraser I briefly think of the former Christian worship artist in Australia. She went on to a solo, singer-songwriter career after that, but I never really heard much of her stuff. The New Zealand native finally broke into the mainstream with her third album “Flag”, and had moderate success, but it is her fourth, and newest release, “Brutal Romantic” that is really breaking through in the music scene.

The album starts off with “Psychosocial”, which is perhaps one of the best songs a singer-songwriter can start off a CD with. But what is made pretty clear is that this is not your typical, acoustic guitar, subtle-vocal induced collection that we expect from this genre. Brutal Romantic is Fraser’s debut into a more experimental style, adding some electronics and beats to her sound. However, those mellow tracks are still there, like the last track, “New Year’s Eve”. Psychosocial starts off with a beautifully delivered, profound statement: “ I love your protection but I don’t love you.” It instantly lets us know that we are in store for something special, and as the choir joins the song in the third line, soon followed by the beat, we are already hooked. The track just sounds so familiar, like an unreleased Adelle track, yet still uniquely Fraser’s. If you check out just one song from this record, make Psychosocial it. I guarantee it will be played on your iTunes for days.

As soon as that song finishes, it cruises right into the next track “Thunder Thunder”, which combined with the first four songs showcases perfectly her new direction stylistically. What is new and noticeable vocally is the high, piercing notes she uses on her choruses, and the perfectly arranged backups, soaring angelically above the melody. The fourth song, “Kings and Queens”, seems like something that was written for Ingrid Michaelson’s latest record, and keeps the steady but upbeat vibe going.

Other than the first two tracks, the catchiest song might be the fifth track, “Bloodrush”. The chorus line “You got so much soul” does not leave you, no matter what track you try to flush it away with. And the bridge line, which shows her falsetto in full beauty, is the perfect climax of the track.

Nevertheless, the record is not all drums, synth and speed. The title track reveals the Fraser we expect to hear: a stripped away song, with no rhythm, and only a horn patch accompanying her voice. It is also refreshing to know that this song is her title track, suggesting that this style is still a major part of who she is creatively. It is in this song she chooses to make her biggest impact lyrically as well:

The silver blade, the sharpened knife, the spinning slow dance.

I can’t remember the thought, warm in the blood, lead in the core.

It is not as depressing as a first read suggests. Rather it is Fraser’s way of showing the tension and problem that every one of us struggles with and consumes us all.

The rest of the CD proceeds with the experimental sounds, but at a slowed pace. “Magical Machine” is a very standout, unique sounding song. The final track is a really mellow song, Imogene Heap-like, and perfect for the ending of the album. As well, as it is the beginning of 2015, it is a great song for reflection and beginning. “It’s been a loud year, and I really need the quite. Its New Year’s Eve babe, and I really need to be alone.”

While most of us chose to celebrate New Year’s Eve loud and out with friends, it is not hard to identify with this message. It is that time when we can reflect on all that has happened, the bad times, and the good times that seem to have gone by so fast, and a chance to gather in reflection before we head back out to our routine and hustle that a new year gives us.

Overall, Brutal Romantic is not a classic, amazing record, but it is perhaps the most pleasant surprise that music can provide. I hope you enjoy this CD as much as I did, and find in it, as she says on New Year’s Eve, that you can “reflect on something true”.