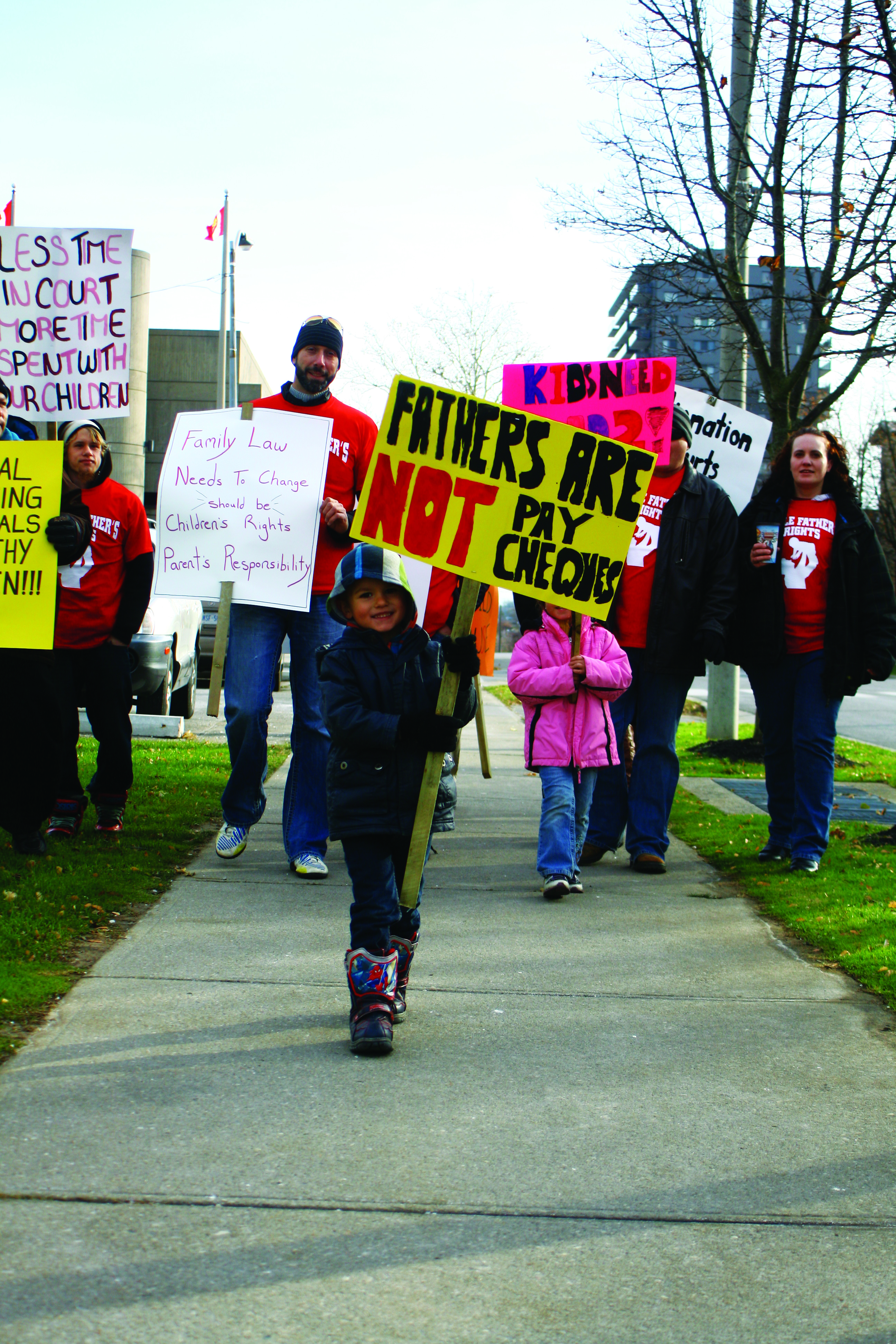 A measure, which began on Facebook, has snowballed into a growing advocacy campaign for the rights of single fathers in Brantford.

The handful of protesters donned bright red t-shirts reading, “Kids need Dads… not visitors!!” and colourful placards. The group’s route marched their demonstration from City Hall past the major courthouses of Brantford’s downtown, prompting applause and head nods from passersby.

“It’s something I believe in; fathers are shut out a lot,” said Jordan Cobb, a protestor at the event in solidarity with the struggle his father is currently facing over custody and limited access.

Although tales of physical violence, misrepresentation and alienation litter the narratives of the Single Fathers Brantford organizers, their mission began as a basic step on social media. “At first the idea was really simple, to have a [Facebook] group for single fathers about events for the kids,” said group founder Jason Brant.

Promoting dialogue amongst group members by hosting breakfasts, events and helping each other access resources contingent to the struggles of single parenthood, the group began to see its numbers climb. “We’ve got interest from other people, other men, even mothers too, because we’re stepping up to do something that needs to be done,” said Cobb.

As attention surrounding the group grew, and the needs of single fathers remained steadfast, leaders Jason Brant, Trevor Cobb and Michelle DaSilva-Hyrski decided it was high time to start presenting their issues to the public eye. Friday’s demonstration was the group’s first formal protest.

“We need to educate the public that there needs to be equality when it comes to parenting,” said DaSilva-Hyrski, “It’s the children that are going to benefit.”

DaSilva-Hyrski, who was raised by a single father, and is a single mother herself, calls advocacy for fathers’ rights her “passion”. “We’re looking for a bill to be passed for equality. We want judges to see both sides.”

Advocating for community resources for fathers, new legislation surrounding equal parental rights and the abolition of parental alienation for the sake of child development, the group met with MPP Dave Levac earlier this week.

Single Fathers Brantford is not the only group trying to reimagine the framework of fatherhood in Canadian culture. Organizations like the White Ribbon Campaign, based out of Toronto, are gaining traction for advocating to help educate and empower men to reduce gender-based violence while reconstructing the normative narrative of masculinity and fatherhood.

“Our engagement around fatherhood issues tries to recognize that an involved father has tremendous benefits for violence prevention, prevention of child abuse, breaking down gendered stereotypes and benefits families, and for men themselves,” said White Ribbon’s office and media coordinator Clay Jones.