Brantford begins Out of the Cold program again this season 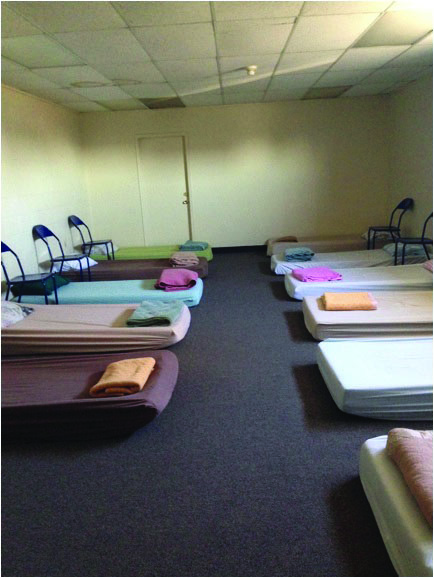 As Ontario enters the season of sub-zero temperatures, Brantford’s Out of the Cold program has begun to open its doors again.

Based out of the basement of Yes Church on West Street, the program is in its eighth year running. The program facilitates daily shelter during the winter season between the hours of 7:30 p.m. and 8:30 a.m. With the growing need for shelter in the Brantford area, Out of the Cold now has the capacity to offer shelter to 39 people each night, including a new room of six beds exclusively for women.

The program is funded primarily through the City of Brantford, but also depends on community volunteers, charitable donations and a small amount of federal funding which will end this April.

According to Executive Shelter Director Rein VandenEden, Out of the Cold exists to provide Brantford’s homeless with sleep and food.

“Most of [the visitors] have lost their ID,” said VandenEden. “Of course that prevents them from getting other services.”

Out of the Cold is a facility for the 19+ community, and hosts a demographic of mostly men between the ages of 25 and 45. According to VandenEden, last season they took in a few people as old as 75.

With over 10 per cent of Brantford families living below the Low Income Cut-Off, the subpar economic climate suggests 2013 could be the busiest year for the program.

Brantford’s Community Needs Assessment 2011-2014 states, “Until all employable individuals are appropriately employed and earning a living wage and all individuals that are not able to actively participate in the labour market are provided with adequate income support, homelessness will continue to exist.”

“I’ve got a few people here who work. They go to work everyday. There’s just not enough money to get a first and last together,” said VandenEden.

According to the Community Needs Assessment, Brantford aims to provide the community with more access to detox facilities, and the ability to obtain diagnoses.

VandenEden plans on extending the Out of The Cold season into a 365-day service this year, and plans to begin building beds to replace the 39 mats the facility currently operates upon.

The long-term plan, according to VandenEden, is a more resourceful establishment that would surpass the current program of “sleep and food”. He plans on growing Out of the Cold into “a year round facility where we could actually hire social workers and psychologists. Whatever it takes to try and deal with people here rather than sending them out to other places.”