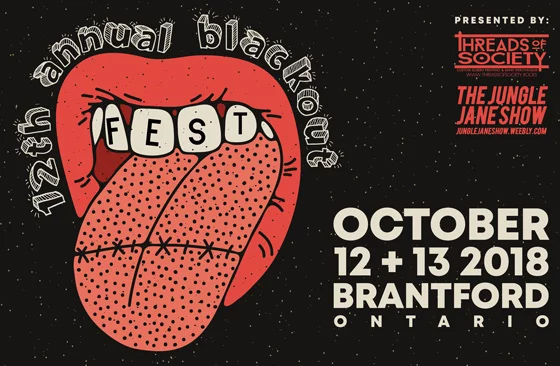 The 12th annual Blackout Fest in Brantford is slowly approaching. With the lineup having been announced in July, fans were able to prepare themselves for another great year. Featuring “Run” by Jamie Mittendorf, the music ranges from pop punk to punk, and has headliners such as Living with Lions, Such Gold, and Dead Tired. The event this year will be taking place on October 12 and 13 at Club NV, but for the first time the festival will expanding into Club Scorpio as well, showcasing the ever-expanding interest for the music and festival.

The festival has come a long way since it first started 12 years ago: it has grown from having eight bands in one venue over one day, to 65 bands playing three venues over two days. As more interest grew for the festival, artists from all over Canada and the US have joined too, playing different genres of music.

“Blackout Fest is a punk rock festival. Now, over the years I’ve had everything from metal, to hard rock, to pop punk to ska, and a bunch of punk rock. Everything from the music to our DIY work ethic can all be defined as a punk rock music festival,” said Mittendorf, festival organizer.

Mittendorf, who was in charge of organizing the festival and getting it up and running, the public has gradually developed an interest in the event. Deciding to run a music festival in Brantford was a challenge in and of itself, he says. But the need for a music influence in this small town was the perfect reason to start the journey.

“I started Blackout Fest in 2007 at a venue called The Ford Plant, RIP. At that time, there were a lot of these types of festivals all around southern Ontario, and I thought to myself, why not Brantford? I had already been running local concerts and events since 2004, so I already knew a lot of bands and had the connections to make this happen on a small scale,” said Mittendorf.

Mittendorf has been in the music game for a long time. Calling up bands to play at venues and seeking out new artists that would interest the public is what he’s known to do. With that in mind, it wasn’t very hard for him to gather a few artists. With a love of punk rock music, he set out to start a festival that would soon become bigger than what he had anticipated.

“I knew a lot of Brantford and area bands since I had started running local concerts in 2004. There wasn’t many punk rock and metal shows at the time, but there were a lot of bands. I started renting out a local music venue every other Friday or Saturday night and the shows were great. Word got out, and I started running three- four shows a month. The rest is history,” said Mittendorf.

But it always hasn’t been easy for Mittendorf; even with all the connections he had, the public’s interest wasn’t always evident. It took a lot of advertising and word of mouth for people to start taking an interest in these shows. But with one problem in the past, new ones have surfaced, and people’s interests in events today isn’t always the easiest thing to obtain.

“There’s definitely less Brantford and area bands [than] there once were. When we first started, most of the support bands we had were within the immediate Brantford area, and now we are pulling in many bands from Hamilton, Kitchener/Waterloo, London and Toronto. It’s also tougher to get people out these days. This isn’t just a problem in Brantford, it’s a problem all throughout North America,” said Mittendorf. “People aren’t supporting live music the way they used to, even 10 years ago. Music is evolving. Most of the top 40 music doesn’t include any instruments played. The big artists these days are rap and hip-hop artists, not rock bands. Also, with the way our current economy is sitting, a lot of people don’t have disposable income they once had,” he said.

With the few hiccups in the music industry, there is no doubt there is an exponential growth of the festival. With such growth comes bigger acts, and Mittendorf has had the chance to see and meet some of his favourite artists and bands.

“I’ve literally had some of my favourite bands of all time play this festival. Ohio’s Hawthorne Heights, Pennsylvania’s Texas In July, and this year, Vancouver’s Living With Lions. Aside from the festival, I’ve had the chance of hosting some incredible artists and comedy acts in Brantford including Randy & Lahey of Trailer Park Boys, Jackass, DJ Yella of NWA, Faber Drive, Classified, and many others,” said Mittendorf.

This year, one of the headlining acts is Dead Tired, a Canadian band fronted by George Pettit of Alexisonfire. This will be their first year at Blackout Fest, in which they are playing on the 12th. Every show played is a different experience but the ritual to getting prepared for playing a show remains the same, said Pettit.

“We will have a couple band practices to get sharp. Probably rent a trailer. Then we will load the trailer. Drive to the concert. Maybe have a couple drinks and a nice meal. That’s our ritual. Call us superstitious but we do that before every show we play,” said Pettit.

Brantford doesn’t have huge venues to play at, aside from the Sanderson Centre, but even that doesn’t compare to the Scotiabank Centre in Toronto. Small venues create a different impact on fans; they provide a more intimate feeling. As for the artist, it can create a whole different performance.

“Both are good, I get the same kick out of small shows that I get out of big ones. I enjoy a good hot sweaty club show. It’s a little more hands on than a big huge show with a crowd barrier” said Pettit when asked about the comparison on Alexisonfire shows with Dead Tired.

But with all the fun the various artists bring, it all comes at a cost for organizers: the extensive planning process. Having to create an atmosphere where the artists and the fans can connect and enjoy may seem like an easy thing to achieve, but it takes up most of Mittendorf’s time, and his plans begin very early on in the year.

“I start planning as early as I can without being too ahead of myself. I spend a lot of my free time designing artwork for the festival, answering and sending out calls and emails, and promoting the festival in general. I also need to keep up to date with what bands are doing well in the southern Ontario music scene. As much as I’d like to book my favourite bands all the time, I need to listen to what the fans want to hear. Knowing what bands people want to see is crucial to creating a successful music festival,” said Mittendorf.

Planning the event isn’t the only thing that has drastically changed from 2004: the budget now has changed drastically, which has all the reason to, when it comes to booking bigger bands.

“When I first started, I think the budget was around $1000. I am now working with a $20,000 budget. I have only recently began securing sponsorships to help cover costs, but most of the initial budget is paid out of my own pocket,” said Mittendorf.

“I’ve accomplished many goals I set out to hit when I first started this festival. A big goal for me was to hit over 1000 tickets sold, and I did the last two years. Another goal was to build it into a multi-venue festival, and this year is the first out of 12 years that I am using more than one venue for the festival. It’s always a little nerve-wracking when you start expanding, because you never truly know how well it will go. Every year the festival turns over a profit, so we must be doing something right,” said Mittendorf.

Blackout Fest can only move forward from here. It is growing each year, and Mittendorf has already reached his personal goals with the festival. Going forward, he only looks to make more people happy and to have the music scene strive in Brantford.