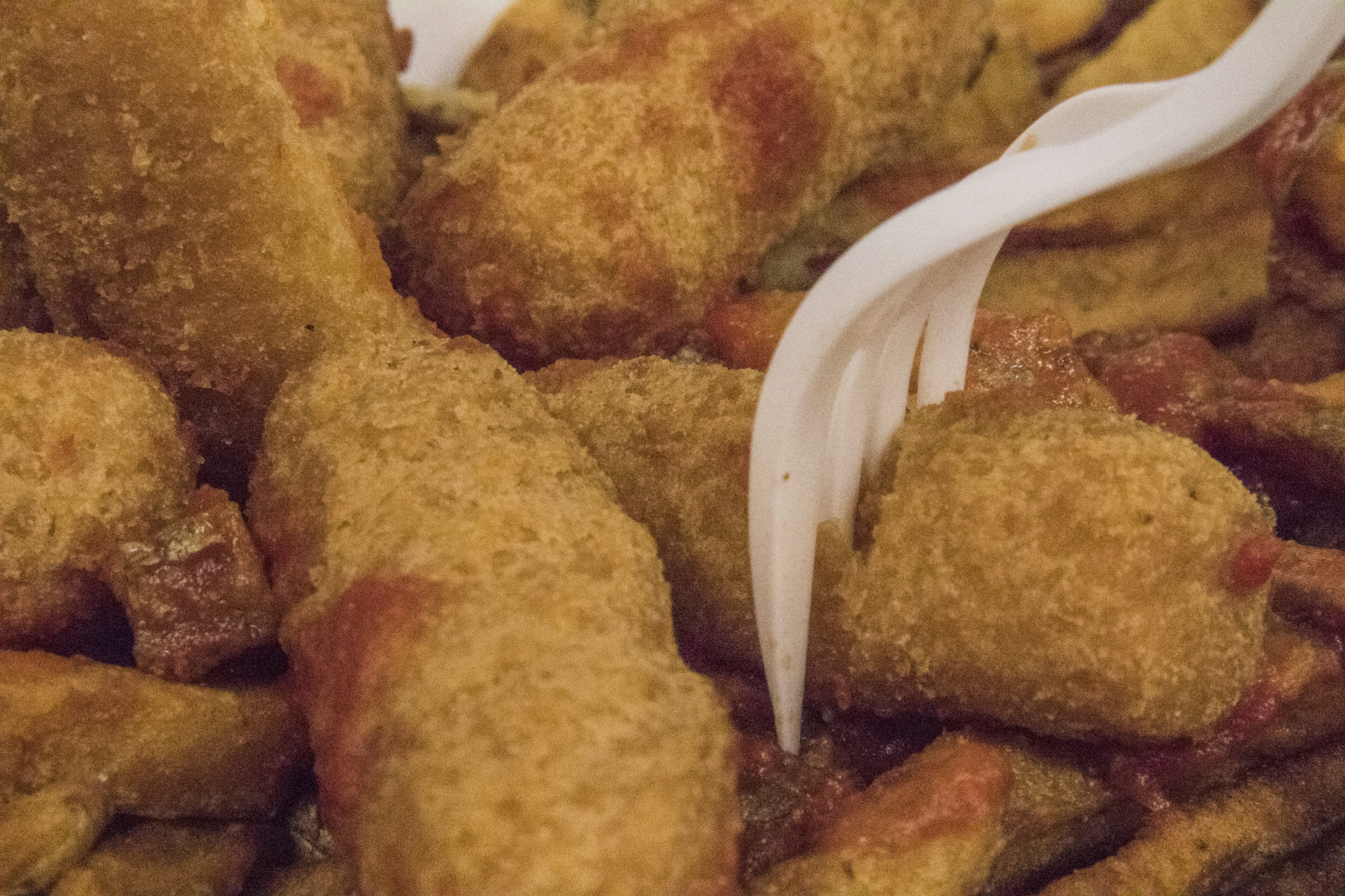 If you are looking into trying competitive eating, start by eating the Lonnie’s Drunk Junk in one sitting.

Lonnie’s On Market, one of the two greasy spoons in downtown Brantford, has an extensive menu that specializes in what could be defined as drunk food. The menu itself features 33 different types of poutine, a bunch of wraps, nachos, mozza sticks, the usual cravings that someone leaving the bar has. While all these options do cater to the crowds coming in, the item that tops all of the others is their Lonnie’s Drunk Junk.

For $15.99, whoever braves this challenge will receive a serving of mozza sticks, chicken fingers, loaded potato wedges, onion rings and popcorn chicken all piled on top of “a mountain of poutine”, along with two pops of their choosing. Based on the fact the Drunk Junk comes with two pops is a bit of an indicator that it is meant to be shared, but a drunk stomach is a force to be reckoned with.

The following is a personal account of what it is like to try and eat the Drunk Junk in one sitting. To add to the challenge no performance enhancing drugs were used, contrary to the recommendation of the cashier after being told what I had set out to do.

The meal comes in a white box with three sauces: gravy, marina and sour cream. The marina did not last particularly long as mozza sticks are easy to wolf down quickly. Next came the onion rings, I would not recommend waiting to eat these as they get a little gross when soggy. These, again, go down quickly on a relatively empty stomach.

I dipped the chicken fingers in gravy for some flavour and threw those down the hatch. The loaded wedges maintain heat well, so be sure to dip them in the sour cream to cool them off. There’s only two of these so I had one, inhaled the popcorn chicken, then finished the second to have a little variety. This half is relatively easy to be honest, but the challenge comes with scaling “the mountain” of gravy slathered cheese curds and french fries.

Trying to eat a family-sized poutine on a stomach that isn’t quite hungry anymore is an experience in and of itself. To make the process easier, I strategized which pops I bought. I chose a Pepsi and Brisk; the Pepsi was for the first half because it’s my favourite and the Brisk for latter because it is not carbonated and would not make me feel more full than I already was.

As for actually eating the poutine, motivation comes and goes in waves. Your stomach can take in a certain amount of food, then it needs a breather. During said breather, I do not recommend trying to push yourself; I dry heaved a few times trying to do just that.

When faced with the final few mouth fulls, motivation is at an all time low. To compensate, break the pile of now cold fries and gravy into smaller piles. It makes the job seem like it’s less of a big challenge.

Once finished, I was hit with the weirdest sense of pride. I spent the night wondering if this was the high that competitive food eaters chase. I think that Lonnie’s On Market should add a plaque to their wall with names of people who were able to pull this challenge off like I did.

While there is the reward of some twisted pride in being able to tackle the challenge of eating the drunk junk in one sober sitting, it does not come without consequences. The most obvious is how it may affect someone’s waistline.

A rough guess of how many calories in the meal is around 2,000, give or take, and to put that in perspective the average Canadian 21 year old male needs to eat 2,400 calories per day to maintain their weight. While this still does fit into someone’s calorie intake for the day, it is not healthy to binge eat carbs to this extent.

“If you overeat (particularly with carbohydrates) eliminate carbohydrates from your breakfast the following morning. You have to burn off some of that stored glycogen before you start to overflow your body with excess carbohydrates. You can eat the next morning, just make sure you eat the right food!”  writes Herve Duchemin, a professional trainer, on bodybuilding.com

In addition, Duchemin recommends working out before eating and to try to eat green foods along with lean proteins. However, to help in the short term, I believe some Tums or Pepto Bismol may be useful.