Behind the scenes of the Alberta flood 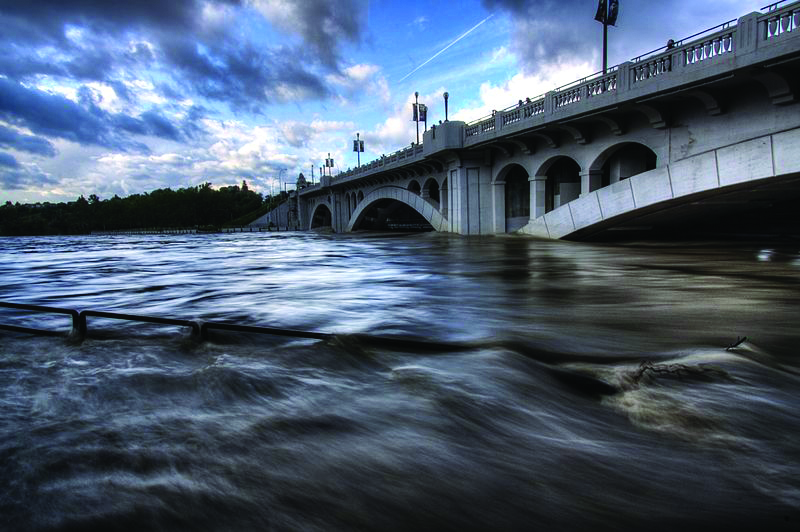 We all remember waking up the morning of Friday, June 21, and seeing the pictures of the floods in southern Alberta. Videos of houses being swept down the Bow River in Canmore and of cars floating away in downtown Calgary could be found all over the Internet. But less told is the story of those who were in the middle of it all, whether they were fighting for their houses and livelihood, or struggling to reopen their places of work. While the floods have rescinded and Calgary is slowly getting back to normal, there are still years left of damage repair to be done.

Darryl Barnes woke up Thursday morning before the flood and went to work at the Talisman Centre, a gym in Calgary, just like every other day. He got off at 2 p.m. and it was raining, but that’s nothing new. It’s Alberta, rain during the summer is what happens. But shortly after he got home, he received notice that the Talisman Centre was closed due to mandatory evacuation. Still, the last thing anybody thought would happen was a massive flood. By the next morning, there was no doubt.

“As I was watching the news Friday morning before work, I saw that right in front of our work the streets were flooded so much it looked like a river,” Barnes said. This was the reality for a huge portion of Calgary’s workforce that morning.

There is no worse place for a disaster like this to strike than in the downtown of a major city. Many people had to shoulder the panic of losing their homes and places of work, and yet keep calm enough to find a solution.

“I got the call Saturday morning to come down to work. My boss gave me directions. It normally takes 15 minutes but it took over two hours to get to work,” Barnes explained. When he arrived at work, the whole park behind the building was under water and the building had no power. From the surface, it looked like the building was untouched. “The whole basement, where all the hot water, air handling, pool filtering equipment and two large hot water boilers were located was covered in about four feet of water,” Barnes said.

Buildings all around the city were damaged in this way. It wasn’t just the houses in certain neighborhoods or downtown streets. The water viciously poured into important buildings and made its way to the basements, destroying foundations. The Scotiabank Saddledome, home of the Calgary Flames, was filled up to the tenth row with water. While the rest of Canada was rejoicing over the rains stopping and the water levels retreating, for the workers and citizens like Barnes, the real test was just beginning.

“The next few days consisted of getting diesel fuel to power the emergency generator. We had to do this five times a day to fill it up,” Barnes said. In addition to getting fuel, Barnes was tasked with directing contractors to get the water out of the basement. The water was removed in two days. For the next two weeks the workers had to remove all the machines that were damaged, while electricians and engineers helped get the power back on and draw up plans to get the facility reopened. Motors were removed and new ones were put in. Barnes and the workers were able to maintain the water in one swimming pool but two other major pools along with two hot tubs and a children’s pool were drained.

The basement was cleaned over time and everything that had been destroyed by the water were removed. It’s not pretty work or inspiring, but it is the kind of stuff that went on behind the scenes in the flood ravaged areas.

The resiliency of Calgarians has stood out throughout all of this. Mayor Naheed Nenshi has been widely praised for how well he showed calmness as a leader and how he very famously announced that the Calgary Stampede would still go on, even though there was less than two weeks until the Stampede was to open and the entire grounds were covered in water. But nevertheless, the stampede did go on and it was just as successful as ever.

The whole city came together to help. It was not just a matter of workers and government officials. On Monday, June 24, around 2,500 volunteers showed up at McMahon Stadium to help people settle back into their homes. “This is Calgary folks. This is the spirit of the community,” Nenshi said.

Not every business downtown was heavily damaged, but that does not mean they did not have a tough time. Many of the restaurants, coffee shops and service shops suffered merely because they had no customers. This was a tragedy where nobody in the city was unaffected.

“We were able to open the gymnasiums, weight and cardio areas of the building around late July. A few weeks later we were able to open the pool that still had water in it along with one hot tub,” Barnes said. Some of the air handling units are operational, but most are still being worked on. One of the two boilers is now working and provides hot water for the facility. A lot of work remains on the pumps that control showers and pool circulation.

“The building has gotten back to some normality but there is a long way to go. I would estimate there are still months of work left to do before we can say we are back to 100 per cent,” Barnes said. The city, its citizens and all of southern Alberta have certainly been dealt a bad hand, but they refuse to quit. Like Barnes, they just get right back to the job, doing the dirty work and doing all they can to restore their city to its rightful state and their lives back to normal.