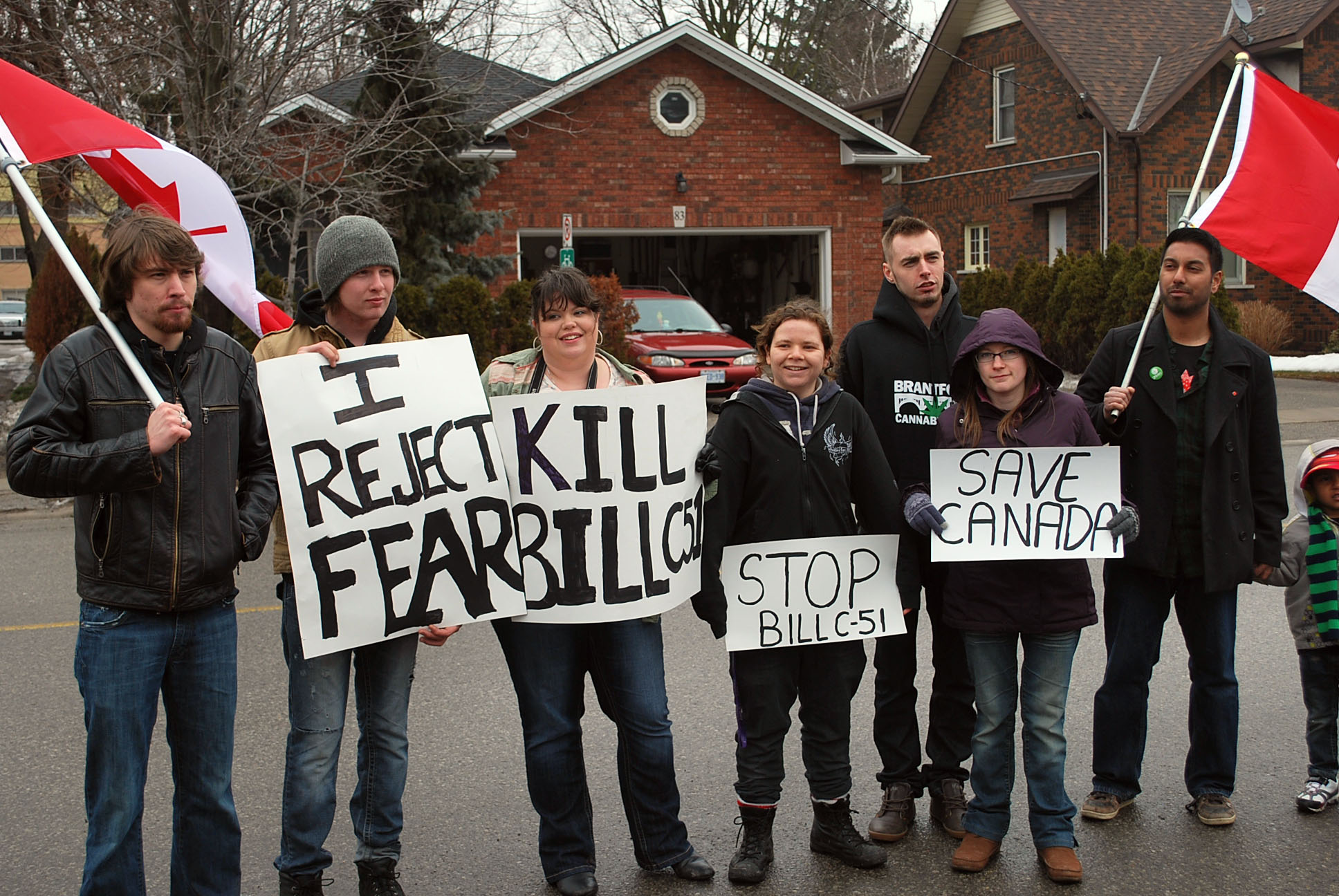 Saturday March 14 marked National Day of Action against Bill C-51, and thousands of protestors gathered in cities across Canada to speak out against the bill.

Stephanie Dearing organized the “snap-action” protest against Bill C-51 for the community of Brant.

“I’ve never organized a protest before,” explained Dearing, who had spent years working as a journalist in which she had to be careful to adhere to the ethics of objective reporting.

While researching Bill C-51, which is tiled the ‘Anti-terrorism Act’, it became apparent to Dearing that she was uncomfortable with the legislation. In a press email, Dearing explained, “the Conservative party has ignored the need for resources in favour of legislation that grants sweeping new powers to police and spy agencies to the detriment of the Canadian Charter of Rights and Freedom.”

After signing a lead.ca petition against Bill C-51, the site emailed Dearing to ask if she would host a demonstration in her community on National Day of Action, “it was a no brainer,” Dearing explained. Dearing began planning the protest on March 5, sending out emails, contacting local politicians and unions, as well as creating social media pages.

“Exercise your franchise. If you don’t, it will be gone.” says Dearing.

The event drew a crowd of over 60 protesters to the sidewalk out front of Brant’s Conservative M.P. Phil McColeman’s St. George Street office.

Gathering with colourful placards, protestors filled the street with music from Jon’Gordon Odegaard’s violin and chants of, “no rights is wrong”.

“This is the issue, especially because it’s preventing us from talking about any other [issues],” explained protestor and Laurier student, Jennie Rideout. “[At] Laurier Brantford we’re a liberal arts campus and these are the people who are going to be affected the most, the activists, the people who are involved with social rights essentially because [Bill C-51] is in the beginning phases of making protest illegal and activism illegal.”

Dianne Wallis of Paris Ontario and Cathy Courtingly explained that Saturday’s protest was their first demonstration.

“It’s a very scary world we live in right now,” Courtingly added. “You’re just fed BS and people are in a fog. We’re all worried about what Kim [Kardashian] is doing and who cares? We really should be worried about a hell of a lot more things, more important things, things that will affect us greatly.”

Deanna Bell and her family drove to the Brantford protest from Niagara Falls, as it was the closest demonstration in Ontario.

Concerned by the broad definition of terrorism within the bill, Bell explained, “There’s no other. There’s only us and then the folks that are trying to take us away from one another and that’s the key.”

““It’s really a shame. We are a nation of immigrants and I don’t think that vilifying a particular section of our society is the way to go. Fear is not an appropriate response if you perceive terrorism, that gives them their weapon!” says Marci Weston, who also attended the demonstration from Niagara Falls.

Bill C-51 is a multifaceted bill and is currently sitting in the committee phase of the House of Commons.

The Anti-terrorism Act can be broken down into five sections. The bill aims to firstly establish the Security of Canada Information Sharing Act. Secondly, the bill will create the Secure Air Travel Act. Bill C-15 furthermore aims to amend the Criminal Code, amend the Canadian Security Intelligence Service Act, and finally make amendments to divisions of the Immigration and Refugee Protection Act.

In a news release, M.P. Steven Blaney who serves as minister of Public Safety Canada stated, “Our new legislation will give police and security forces the tools and flexibility they need to deal with evolving threats and better protect Canadians- at home and abroad.”

In statement called Life Means Life made to an audience in Scarborough on March 4, Prime Minister Harper said, “We cannot take that risk with criminals who so despise our values and way of life that they carry out deadly acts of terrorism and high treason.”

M.P. Phil McColeman did not respond to The Sputnik’s request for comment concerning Saturday’s protests, but in a statement made to The Expositor claimed that “80 to 90 per cent” of Canadians support Bill C-51.

Amnesty International Canada has been vocal in the past months concerning potential human rights violations that linger within the bill.

According to Hilary Homes of Amnesty International Canada, the organization is asking that the bill be withdrawn in its entirety.

“We did ask ourselves if a few amendments here or there would be enough, but in the end we simply felt that there are too many problems with the bill that are too interconnected,” says Homes.

According to Homes, Bill C-51 seeks to establish several new acts as well as amend existing frameworks. The bill is designed around broad definitions, “In fact threats to security of Canada does not even expressively refer to terrorism, for example in several places it just says the phrase ‘detrimental to the interest of Canada’”, explained Homes.

Homes cited the expanded power Bill C-51 seeks to give to police and security agencies as being a concern for Amnesty International Canada.

“I think that one of the central ones is that the bill doesn’t specify what CSIS agents are allowed to do, you have to remember that the definition of threats is really, really broad, it does say what they can’t do. So they can’t kill, they can’t commit bodily harm, they can’t pervert justice or violate sexual integrity and when we look at that, there’s just a really wide range of human rights violations that aren’t on that no go list.” says Homes. “What’s really striking to me about what isn’t on there though, is torture. It does say “bodily harm”, but torture also deals with not just physical integrity but mental integrity.”

Amnesty International Canada would like to see Canada establish a “legislated human rights framework for the National Security programming.”

“As part of that, what we’d like to see is a full assessment of past cases and existing laws, tool and resources in the area of national security…before considering expanding powers and other reforms.” says Homes.

During Saturday’s protests, Homes met a lot of demonstrators who cited the National Day of Action as their first protest.

“I actually went up to a guy who was holding a sign that said “Farenheit C-51” which I thought was quite a good sign, and I went to talk to him and he said that he’d never been to a protest before,” says Homes. “A lot of people at the protests are concerned about the general framework that the bill puts out there. And how it does compromise their national human rights obligations. They feel affected because of that. They don’t like where the government is going in terms of jeopardizing those obligations.”