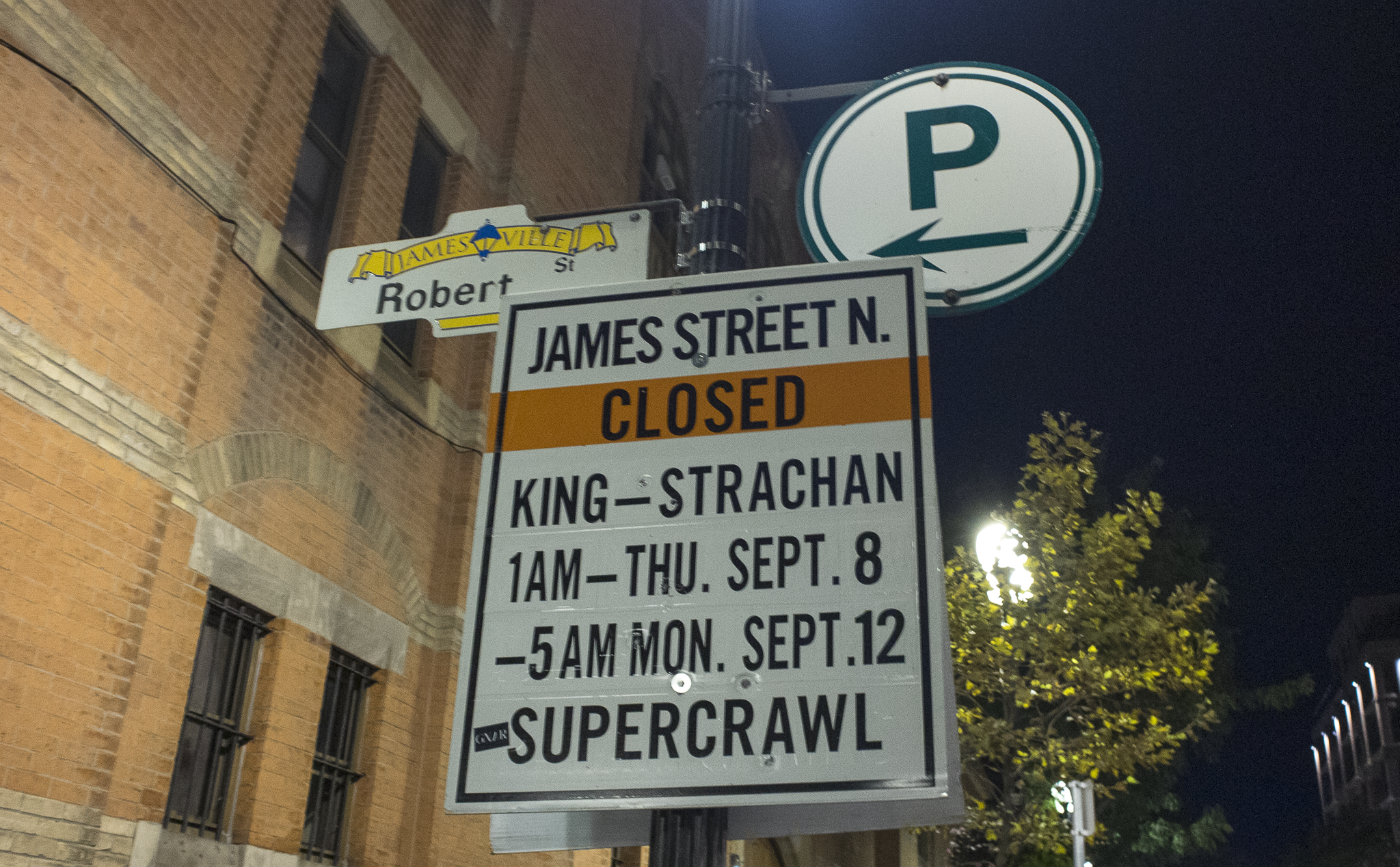 Three festivals, each alike in dignity, in fair southern Ontario where we lay our scene. Over the past few weekends, I have been lucky enough to attend three of the coolest celebrations of Canadian artistry anyone could hope for, none of which required me to commute for more than two hours in any direction.

Allow me to paint you a picture of the great times to be had at each of these festivals and leave you with my general takeaway after experiencing all the excitement myself: how fortunate we all are to live in an area where we’re just about surrounded by some of the largest, most vibrant artistic festivities in the continent. Wilfrid Laurier University’s Brantford campus is situated about an hour’s drive away from some of the richest arts and cultural experiences that North America has to offer.

First up on the itinerary was none other than Hamilton’s Supercrawl Arts Festival. Held the weekend of Sept. 9 to 11, the annual Art Crawl transforms James Street North and its surrounding blocks into a bustling coalescence of vendors and artists of all mediums demonstrating their artistic passion and prowess in about as many different ways as you could imagine. There’s street performers and stage concerts, local small business owners and freelance artists whose art is both on display and for sale, fashion shows, author talks, dance performances, post-industrial art rock demonstrations, you name it. Indie musicians line the stages, showcasing Hamilton’s diverse sound and incredibly lively music scene. One particular highlight was Friday night’s headlining act, Dundas’s own The Dirty Nil, who shredded the TD Stage to bits with their alt-rock charisma and a cheeky cover of Bonnie Tyler’s Total Eclipse of the Heart for good measure. Looking out into the crowd, moments before strumming the last song of their set to life, frontman Luke Bentham expressed the band’s profound honour when closing out on Day 1 of the beloved Hamilton Arts Festival. His remarks sparked a subtle reminder to myself of how cool it is that A, all this impeccable, unique, diverse art is constantly being made, purely for art’s sake; B, said art is celebrated so widely every year in Hamilton; and C, this festival is free and takes place a mere stone’s throw away from me. But, my own personal celebration of Canadian art didn’t end with Supercrawl.

The following day was my inaugural experience at the Toronto International Film Festival or TIFF. If I didn’t have a love for film three weeks ago, I sure do now. It’s hard to capture the magic felt at an event like that. Obviously, tons of celebrities make their way to Ontario’s capital for a few days, but the Hollywood names are honestly more of an afterthought within the entire spectacle of the festival. The streets stretching from the TIFF Bell Lightbox up to the Scotiabank Theatre are positively beaming with a shared enthusiasm for movies that is palpable and endlessly inspiring. For a first-timer like myself, this excitement is to be expected, but chatting with a number of seasoned TIFF-goers, it’s evident that their annual trip to the festival is a highlight of the year. The ability to share the love of film alongside thousands of other cinephiles for over 10 days is such a beautiful way to spend some time if you have it and I couldn’t recommend it enough. I would especially urge you to make your way there next year, particularly given our geographical position. TIFF presents a remarkable opportunity to southern Ontarians who love movies – an opportunity many of us never even think to take advantage of. We have one of the largest film festivals in the world and it’s like an hour away, that’s the coolest thing ever!

The experience was simply too invigorating that I just had to make the trip back up there the following weekend. My first day consisted of world premieres of the Irish documentary, Pray for Our Sinners directed by Sinéad O’Shea, and the Swiss feature film, Thunder directed by Carmen Jaquier, in which primary themes revolve around religious trauma and the unfair treatment of youth at the hands of the Church. I ended my night on a generally less depressing note with a screening of six short films, a couple of which were Canadian-made, whereby the post-show question-and-answer panel with the films’ creators highlighted that despite their varying backgrounds and experiences, the powerful thread that tied each of them together was a fundamental undying love for the art of cinema. It’s a passion that brought everyone in that theatre to the same place and it was impossible not to be moved by.

My following weekend again seemed to follow an unintended theme, this time regarding the isolation and hardship experienced by all during COVID-19. The two feature films I watched, Tora’s Husband directed by Rima Das and The Hotel directed by Wang Xiaoshuai, produced in India and China respectively, demonstrate the varying difficulties faced by everyday people in those claustrophobic months of COVID-19’s reign. Seeing those pictures back-to-back really drove home the point that no matter who you were, where you came from or where you were in the world at that time, the effects of the forced confinement were far-reaching.

For a change of pace from the pandemic-themed features, I was able to round out the night with the world premiere of director Mary Harron’s Salvador Dalí biopic, Dalíland, that I watched inside the incomparable Visa Screening Room in the Princess of Whales Theatre. Unfortunately, stars Sir Ben Kingsley and Barbara Sukowa were unable to attend the premiere alongside the rest of the cast due to, you guessed it, COVID-19 (Sukowa also broke her ankle the day prior). Nonetheless, their outstanding performances as the peerless surrealist painter and his wife/muse Gala were enough to make me feel like they were actually in the room with us. Overall, TIFF and Supercrawl left me with enough artistic inspiration and communal connection to last me well into December. Nevertheless, there was one more Ontario festival on my calendar.

Thus, I spent my past weekend in the lovely city of Stratford, Ontario, hailed throughout North America and beyond as one of the primary places one can experience world-renowned theatre. The famed Stratford Festival has staged countless Shakespearean and contemporary works since Sir Alec Guinness delivered the opening lines of the festival’s inaugural production of Richard III back in 1953. This annual event lives on in 2022, wrapping up its 70th season in October. Four theatre venues are home to the likes of Hamlet, Little Women, Chicago and several others this festival season. Attendees have the wonderful opportunity to watch both seasoned veterans and promising newcomers perform these acclaimed works. I was fortunate enough to catch a delightfully funny, modern reimagining of Molière’s The Miser as well as a brilliant production of All’s Well That Ends Well throughout which I found myself surprisingly moved, despite Shakespeare having written it as a comedy. The festival and the city of Stratford more generally are exquisite tributes not only to The Bard’s monumental works, but to the art of theatre itself.

Upon my travels in Stratford, as I wandered among the streets lined with beautiful Victorian buildings, I found a record store on the main strip with many hidden gems (finally, my fruitless search for a vinyl copy of Randy Newman’s 1972 classic, Sail Away, is over). While inside, I conversed with a fellow patron about all the incredible concerts she and I have been lucky to attend over the years. Countless legends have taken the stage in Toronto, Niagara Falls, London, etc., whom music-lovers living just about anywhere else in Canada, let alone the rest of the world, don’t get nearly the same opportunity to see. It dawned on me then, just how many wonderful opportunities for artistic exploration exist no more than about a two-hour drive away.

Aside from Los Angeles and New York City, Toronto is the spot in North America for both creating and celebrating film, as TIFF is regarded as one of the leading festivals of its kind in the entire world. Similarly, Stratford is renowned globally as a touchstone of the Shakespearean theatrical experience. Literal world-class talent is on display year after year, only about an hour’s drive out of Brantford. Hamilton is a burgeoning artistic powerhouse in all mediums and its music scene is particularly something to behold. Supercrawl celebrates these insanely talented artists for free, the festival is for anyone and everyone to enjoy!

My fellow record-store patron and I came to the conclusion that we really are profoundly lucky to be situated where we are geographically, given all the amazing experiences available at our fingertips. The least we can do to honour that luck would be to explore and enjoy these festivals and similar events in all their glory. Canada has a lot to offer in the artistic space and I hope you all get the chance to attend each of these festivals at some point and walk away as inspired and amazed as I have.