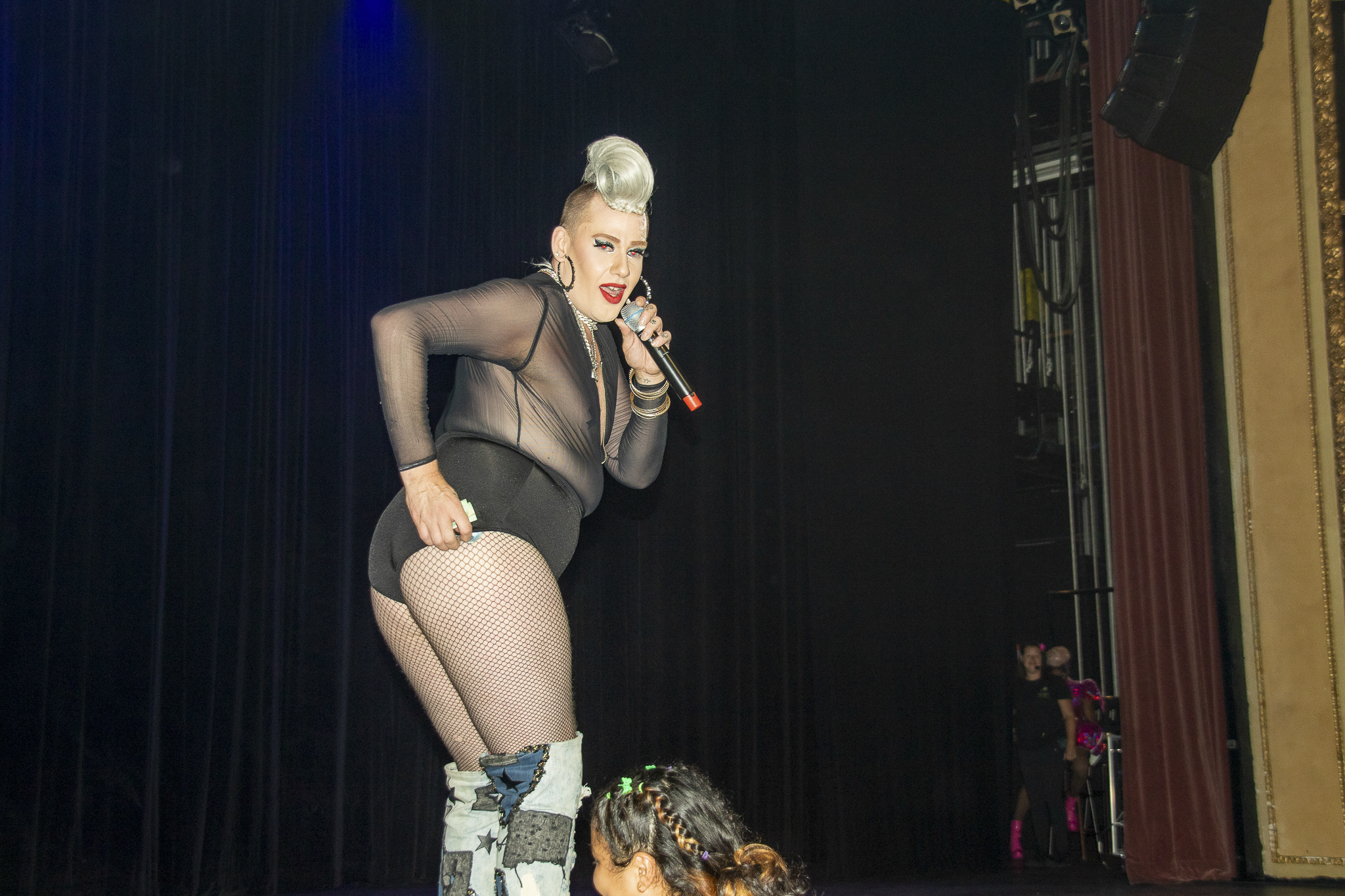 Strutting on stage in zip-up skinny jeans, bright red lipstick and a leather jacket layered under a fur coat, TroyBoy Parks immediately commanded the attention of an entire crowd of first-years and icebreakers piled into the Sanderson Centre for Drag Hour on the Tuesday night of O-Week.

“The louder you are, the harder we work,” said Parks, the show’s charming host. He jokingly added that “tipping is mandatory.”

The show featured star drag queens Devine Darlin, Farra N. Hyte, Rachael Temptation and BOA, who was a contestant on season one of Canada’s Drag Race.

Temptation of Toronto kicked things off with a high-energy performance of Beyoncé’s Break My Soul. In her neon orange wig and pink, feathery bodysuit, Temptation danced her way down the aisles of the theatre to greet the crowd up close before somersaulting backwards onto centre stage again.

Darlin, also from Toronto, gave us a taste of what to expect at the 2023 Superbowl half-time show with her medley of Rihanna’s pop hits. As Pon de Replay and Umbrella transitioned into What’s My Name?, Darlin – all while wearing pink high heels, a bedazzled minidress and a hairpiece to match – jumped into show-stopping splits that left the crowd awed. As Diamonds played, Darlin walked out into the crowd and led the room in waving their hands to the Rihanna classic. “Shine bright like a diamond” she did.

Dua Lipa’s ever-groovy Don’t Start Now prompted an epic sing-along thanks to BOA’s fiery rendition of the hit. The platinum blond wig, the neon green thigh-high boots, the abundance of cartwheels — BOA’s star power was undeniable. Making her way down the theatre aisles, she managed to do the splits over people’s seats.

“What grade are we in?” BOA asked the crowd after her performance. “Oh, we’re in university!”

Hyte, a drag queen of 27 years and the only Canadian to win two international drag pageants is as funny as she is fierce. She posed for pictures and cracked jokes as she danced across the stage and down the aisles in her cheetah print leotard and giant gold hoop earrings. The Pussycat Dolls’ Don’t Cha was the perfect soundtrack to her flirtatious performance.

The last performer to grace the Drag Hour stage was, of course, TroyBoy Parks himself. His rockstar aesthetic, popped collar, mohawk and all, brought the house down when paired with Aerosmith’s rendition of The Beatles’ iconic Come Together.

The drag queens’ performances were spectacular, but the most memorable moments of the show were a result of Parks’s request for volunteers. Four brave first-years with the adrenaline-fueled raise of their hands unknowingly volunteered to partake in an impromptu dance off and rose to the occasion under pressure.

Jaelyn Walsh, a first-year human rights and human diversity student and the crowd-voted winner of the dance off, didn’t expect her first time attending a drag show in-person to involve her freestyling on stage in front of her new peers.

“It was kind of nerve-wracking,” said Walsh. “But then I was like, ‘You know what? Whatever,’ and I just did it!”

Walsh said she’d give this year’s O-Week events a ten out of ten rating.

Later in the drag show, Parks gathered four more volunteers who competed in a “walk off” of a similar fashion and once again, won the crowd over.

The event ended with a photo-op for anyone who wanted a picture with the drag queens to commemorate the night’s head-over-heels performances.