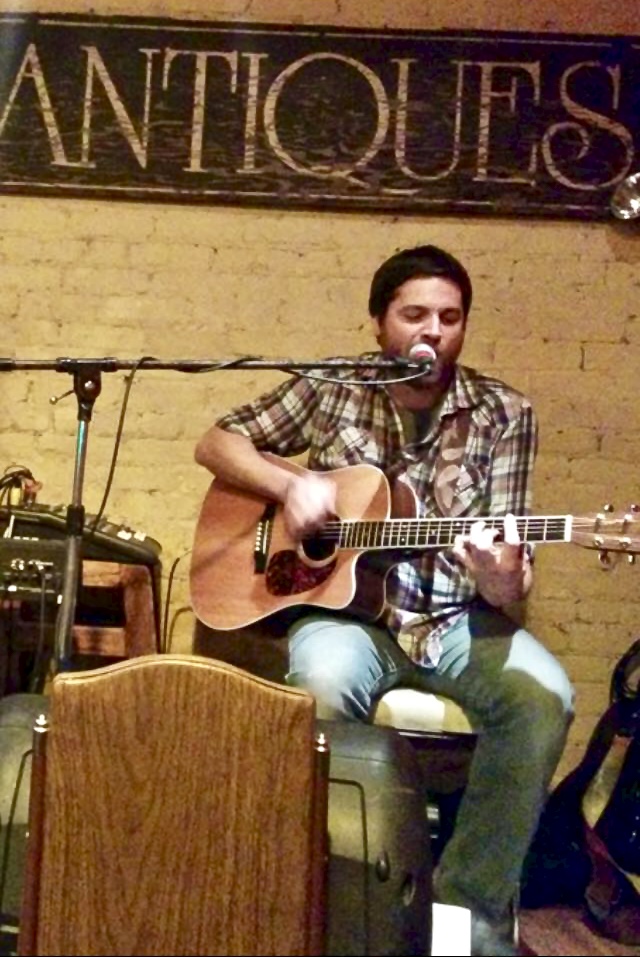 Local musicians are always a good find. Looking for something you have not heard before, or even something original can be frustrating, especially online. Luckily, there happens to be a lot of local talent in Brantford. Brantford native Steven Elmo Murphy has been creating music for people since he was 15. Now, the 41-year-old continues to create. He shares his work and passion for music at local bars, such as Devlin’s Advocate.

The folk-rock singer and guitar player has lived in Brantford his entire life. He recalls pending summers in Port Dover and being heavily influenced by the time he spent with his grandparents.

“Grandma was a piano player and music teacher and was really good. I started playing guitar when I was 15 and started dabbling in it and really started to play around 16 and 17. By the time I was 18 I knew I wanted to play forever,” said Murphy.

Murphy says he was influenced not only by family, but also by the greats such as Steven Stills (one of the greatest guitar players) and even The Grateful Dead and Pink Floyd. Now, covering his favourite artists for listeners generates some of his favourite experiences. Although he knew early on that he wanted to play the guitar, Murphy did not always know that singing would also have an impact on his life.

“Honestly I never thought I would become a singer. Singing is my passion. I started singing probably when I was 20. I sang before but never in front of people. I got over the fear… when my friend drowned when I was 20, and we used to play all the time and I would sing with him in my room. He was a big influence for me, got me singing and playing,” said Murphy.

The first few steps of becoming a full-time musician were not always the easiest. This is especially true of the first gig Murphy played in 1997 at only 20 years old. Experiencing his first panic attack, Murphy had sworn out performing again.

“I used to play at a place in Brantford called The Turnaround and I basically threw everything my friend taught me out the window. So I stopped playing because I had a panic attack. After that I said I would never ever play again. Then after that the next time I sang was at his funeral. But after that I’ve been singing ever since,” said Murphy.

Since 1997, Murphy has continued to play and cover music. In 2004 he released his first album called “Friends and I” and went on to release three more albums. Murphy expects to release a fifth album in 2019. He also has two bands that he loves to play with: Stumble Weed and The Neu Guys. He has played with other artists at venues in Woodstock, Paris, Hamilton, and Port Dover. Recently, Murphy had an opportunity to play a music festival in Durham.

Music surrounds Murphy’s life, literally. He says that he has an ever-growing vinyl collection that began with him collecting 45 records at age five.

“Vinyl is very important to me,” said Murphy. Sometimes he likes to throw vinyl parties for him and his friends, collecting and sharing new music that each has discovered and growing their interests.

Life isn’t always about music for Steven Elmo Murphy, though. In fact, his every day life includes his ten-year-old daughter Scout and being able to spend time with her as well.

“I have a ten-year-old daughter, so I try to spend time with her, Scout. You know I like to spend some time to find other gigs and other jobs. I don’t play sports anymore. A lot of mucking around really, I play quite a bit. If I’m not playing I’m taking care of my child. I watch a lot of hockey with my dad and hang out with my friends and go to parties. I like to go down the river, being around water and a lot of time at the beach,” said Murphy.

The Toronto Maple Leafs fan also helps with landscaping and cutting grass for families, but one day he hopes to quit everything else and focus only on music as a full-time career: living his dream with his family, kids, and music.