Anxiety in the classroom 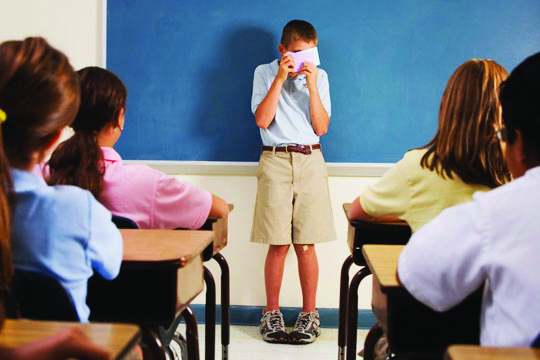 The thought didn’t really pop into my mind until I randomly read it one day on Twitter. Class presentations are brutal for a lot of us, having to do countless hours of work (sometimes, with a partner that does nothing to help) and planning exactly what to say. But imagine if you had a looming cloud of concern over you that no one else had to deal with, that the professor may or may not have thought to consider. I’m sure there could be a lot of looming concerns, but the one I’m specifically thinking of is an anxiety disorder. Although “anxiety disorder” is an umbrella term that can refer to a variety of specific things, in this instance I’m talking about an individual with diagnosable levels of increased anxiety, meaning “an abnormal and overwhelming sense of apprehension and fear.”

I’ve unfortunately heard of such overwhelming cases that individuals can hardly make it through an exam with such high levels of anxiety plaguing them, which effects their marks drastically. I’ve heard of individuals who can’t make it to a class where they don’t know someone else, since there would be no anchor present, meaning someone to be there and give a sense of comfort. But even that is an individual battle. Having to suffer through it is hard, but I’m sure the battle gets insurmountably larger when you’re face to face with anywhere from 20 to 250 strangers, solely waiting on the words you’re about to utter. There, in the front row, the professor waits with pen and paper in hand ready to evaluate. Your body slightly shaking and sweat appearing could lead to a grin, “stage fright”, but in reality, you could be trying to fight the urge to pass out. That’s the thing, we live in a society that doesn’t assume psychological disorders right away. Maybe they shouldn’t be our first assumption, but they shouldn’t be ignored either.

As I mentioned earlier, this can lead to marks taking a massive blow. But I feel that it’s a hidden problem. While fighting the anxiety just to stand and utter what needs to be done, less concern is placed on saying it with the confidence that you’re being marked on, your showmanship deceases drastically, even if what you’re actually saying is brilliant. So, what if this leads to a decreased mark? To anyone, I’m sure it would be a confidence blow, but when matched with what you had to overcome just to present, the hit to your confidence would be dramatically more severe.

Since I am not diagnosed with any form of anxiety disorders, a lot of the results I’ve discussed so far are mainly just assumptions and my own attempt to put myself in someone else’s shoes. But, I decided to do some research as if I did suffer from an anxiety disorder, some research to see possible things around the Laurier Brantford community that may help. Luckily there were some results, but not really the ones I had expected. First, by searching very basically about “anxiety, Laurier Brantford” all I found were crisis intervention services. This, in my opinion, is rather sad. It seemed there were pointers on what to do once someone was suffering an anxiety attack, what to do when it reached its worst (and even then, their response is giving you a number to call). I then found mental health services at Laurier Brantford, which is for sure a good thing, but I question how it would help in situations inside the classroom. Finally, something that may have benefit, the extension for the “Student Support Team” (x3318) which you’re to call for issues regarding “Intersection of: Mental, Health, Security and/ or Academic Concerns.” It seems we do have solutions in place, albeit ones you need to dig a bit for.

That’s where issues related to mental health and psychological issues can appear. What happens when the individual doesn’t believe they have a problem? What happens if it’s one that they think “isn’t that bad,” that they should just work through? Circular thinking ensues; “stage fright”, grin, “maybe I should call for help”, “my problem isn’t a problem”, low marks, “stage fright.” The only concern is, what do you do? Drastically altering the classroom experience, changing examinations or banning class presentations are improbable, blanket solutions. The Anxiety Disorders Association of Canada states that 12 per cent of Canadians suffer from anxiety issues a year, an amount large enough to consider how our system could change, but not large enough for immediate radical change. Education and anxiety seems to be a conundrum.

A solution to this problem needs to be discussed, for it’s a major deterrent in the universality of our education system. With some anxiety issues reaching drastic levels, what happens if an individual ceases their education at the mandatory age of 18? We no longer live in a society where education is available to all.  Something needs to be done. But, the massive question is, “What?”