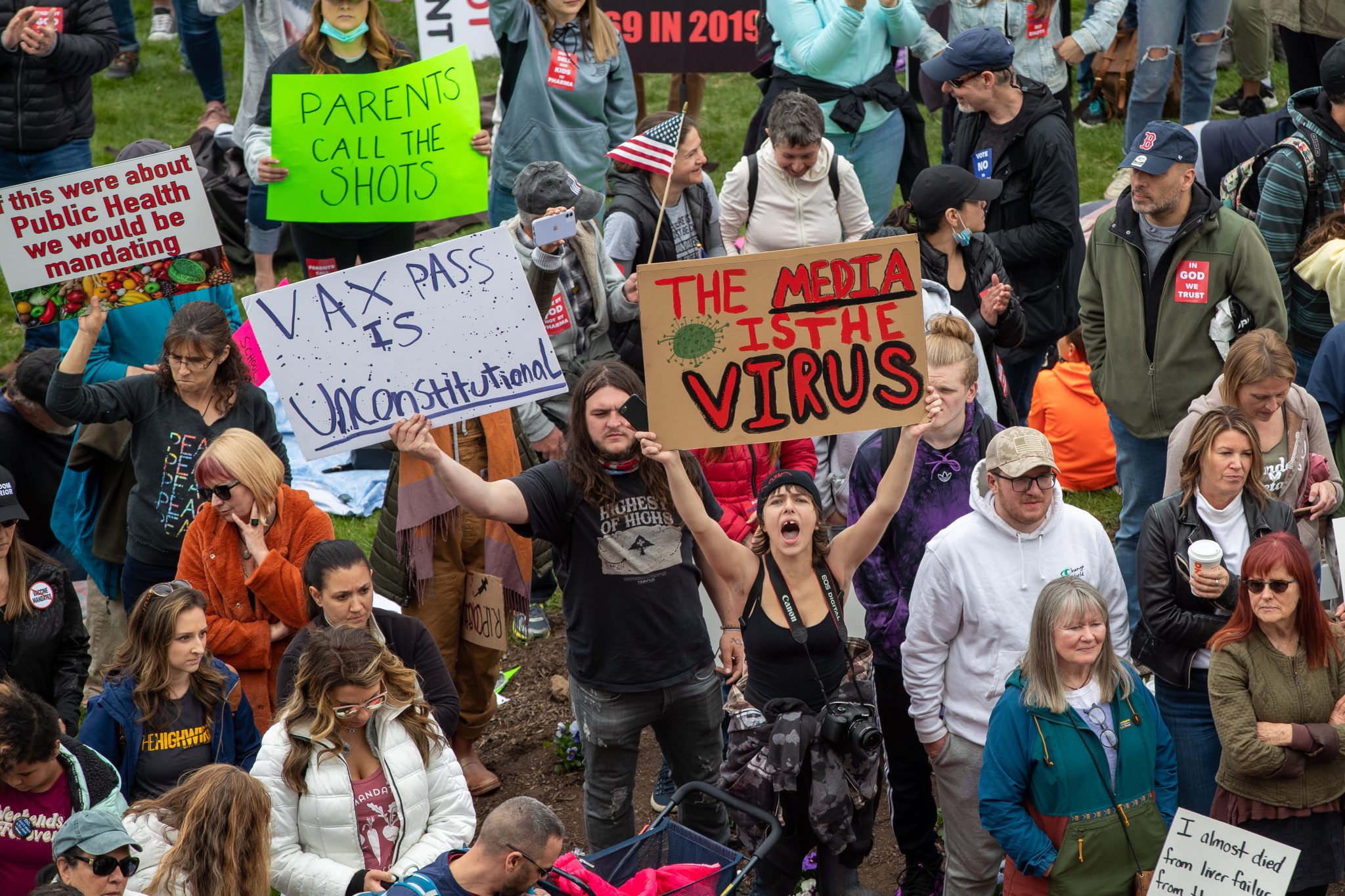 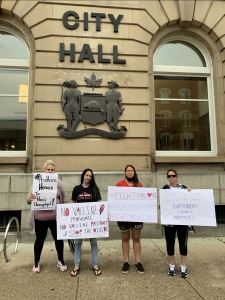 The four women, from left to right, Tamara Heisler, Sara Christiaens, Jennifer Christiaens and an  unidentified personal support worker, believed the passport mandate was taking away their rights and freedoms as Canadians.

“Canada was built on freedom. If we let them take this, what else are they going to take from us?” said protestor Jennifer Christiaens.

As the National Anthem played through the speakers of a protestor’s van, the women and their children stood in a line to sing, while holding signs reading, “stop the divide” and “everybody’s lives matter.”

The protest group shared that they want Canadian citizens to stand up for what they believe in and to have their own personal freedom of choice, which they believe was stolen with the new vaccine passport. They stated they are standing up in defense of a mandate that needs to be corrected.

The group believes some people are too scared to come forward and defend their rights against the vaccine passport mandate, so they are motivating others to protect their personal liberties through protesting. The group believes protesting on the street is the most effective expression of unity, as everyone nearby will see and hear them.

When asked if they were protesting the vaccine as well as the passport, the phrase “it’s your choice,” echoed throughout the group.

The members of this group do not believe the vaccine has undergone enough testing and has not been  studied long enough to see the side effects.

Sara Christiaens, stated she will not get the vaccine because she has post-traumatic stress disorder from an attack in downtown Brantford in 2012, making her “trust virtually nothing”. Jennifer Christiaens has an allergy to Polyethylene Glycol, which limits her vaccine options from mRNA vaccines such as Pfizer and Moderna.

The personal support worker (PSW) who was protesting says she has received her first vaccine shot but will not receive her second one until there is further study on the side effects of the vaccine.

This protestor encourages people to question the information they are being handed and challenge the numbers of COVID patients they are seeing.

“There are more people coming in with vaccine side effects than actually being admitted with COVID,” said the PSW protestor. “What we’re being told isn’t always true.”

It has not been determined if these cases were from the COVID vaccine. According to the CDC government website, these reactions are responses to disease in the body, which typically occurs after the second mRNA vaccine dose and can be treated.

The protest group believes they are receiving censored information about the vaccine, and that the numbers of COVID-19 vaccine reactions being publicly shared (presented) are inaccurate.

The women believe the divide between people supporting and opposing the vaccine passport mandate is tearing the nation apart.

“This is the biggest divide Canada has ever seen,” said Jennifer Christiaens.

Some members of the group feel their efforts to support businesses throughout periods of lockdowns are being overlooked now that the vaccine passport is necessary for sit-in dining at restaurants.

“The unvaccinated people against the vaccine passport … were all for keeping these restaurants open six months ago and now we’re being the ones punished for it because we still stand our grounds and beliefs,” said Heisler.

In addition to being restricted to dine-in options, Heisler had to leave her school campus and was not allowed on the premises when it was made known she did not have her vaccine.

Heisler felt she was having her education taken away and threatened because of the vaccine and passport mandate.

She later called the Ontario Human Rights Commission, to which she summarizes they state, “Anybody that’s refusing it [the vaccine] doesn’t have a right to protection or any help from them whatsoever,” said Heisler.

On their website, the Ontario Human Rights Commission states “receiving a COVID-19 vaccine remains voluntary, the OHRC takes the position that mandating and requiring proof of vaccination to protect people at work or when receiving services is generally permissible under the Human Rights Code”

The Ontario Human Rights Commission is practicing their duty to protect as many people as possible in work or service environments.

The protestors hope to get other Canadians in their area to fight with them.

“The Charter of Rights and Freedoms protects us all. We’re trying to stand up and tell everybody. You have rights, you have choice. Don’t let the government take it from you,” said Sara Christiaens.

For more information about the COVID vaccine passport, visit the Government of Ontario’s official website.