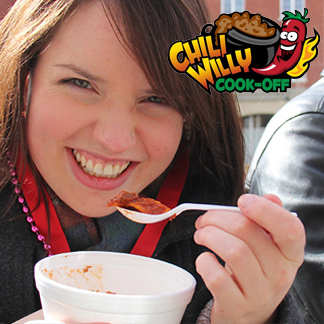 The Chili Willy Cook-Off happening in Harmony Square on Feb 24 has had many residents and contenders looking forward to the event since it was first announced. With the weather going to the extremes and even facing a polar vortex, there isn’t anything better for Brantford locals than experiencing a nice warm bowl of chili and some friendly competition.

Hosted by the City of Brantford and Strodes BBQ and Deli, contenders are vying for the title of Brantford’s best bowl of chili. With a $5 entrance fee, residents can try as much chili as they can handle and can vote for their favourite chili to be the winner.

Tom Mercante, the owner of Mercasa Little Italy Eatery, has been attending the chili cook-off every year. Thanks to his newly opened restaurant, this year he gets to be contender. As the cook-off is widely advertised, Mercante is looking forward to the new customers that may come from the event.

“[It’s a] great community event that will give our new restaurant some exposure,” said Mercante.

But the Chili Willy Cook–Cff isn’t only about the chili itself: all proceeds will go towards having free events and programs in Harmony Square, like Frosty Fest, which we had earlier in February.

A lot goes into planning for this event: the strategy around perfecting the chili recipe, deciding who is going to serve the chili to the people and having an execution plan that creates a great experience for the people as well.

“We have been preparing some test recipes, organizing our equipment, confirming staff and constructing a production and execution plan,” said Mercante.

With over 11 contenders looking to claim the best chili in Brantford, Mercante said that isn’t the most important thing about the chili competition. Being able to give back to the community and to show your support for people to come out and enjoy events together is important for everyone to come together, and chili is just one the ways to do that successfully.