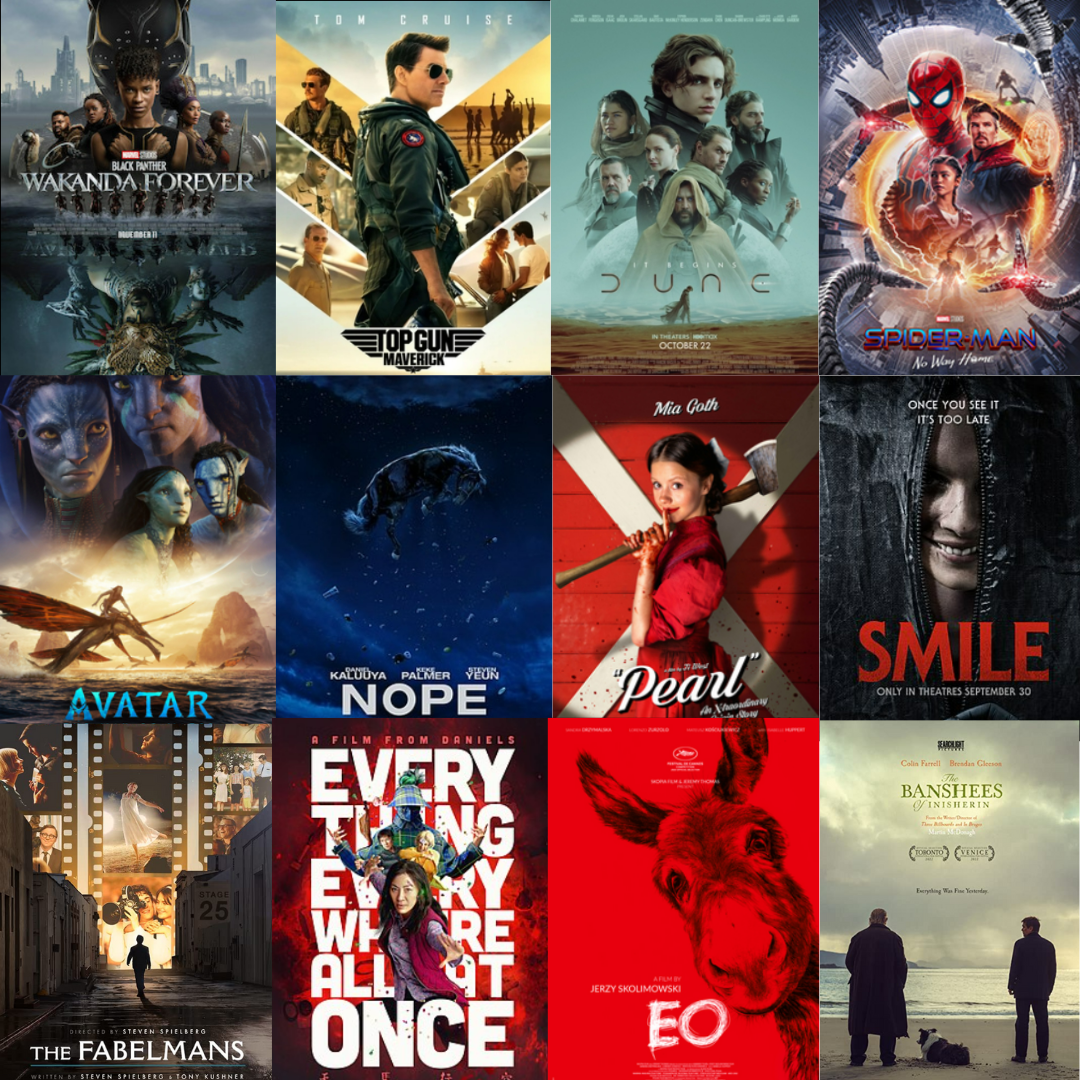 As we bid so long, farewell to 2022, it’s always fun to look back at the artistic heights reached by countless talents who gave their all to their devoted projects. I’d like to zone in particularly on the films that moved audiences this year and some personal favourites that severely altered my brain chemistry.

Marvel Studios saw continued colossal success this year with the releases of the highly anticipated franchise continuations, “Spider-Man: No Way Home” and “Black Panther: Wakanda Forever”. Yet, in an age of Marvel dominating the box office at every turn, 2022 was also a year for non-mega franchise blockbusters to take cinemas by storm.

The most notable example of which being “Top Gun: Maverick”, the thrilling legacy sequel to the 1986 smash hit “Top Gun”. This follow-up story of Tom Cruise’s iconic cool guy pilot grossed over $1 billion worldwide this past year, but more importantly, it was my favourite movie theatre experience of the year (my personal experience is much more relevant than the entirety of the box office). “Top Gun: Maverick” was a love-in for action movie lovers, with larger-than-life practical effects, sound design and stunt work that cements Cruise as one of the great action film stars of all time.

In the same vein of blockbuster cinema, the year’s highlights also include part one of Denis Villeneuve’s “Dune” adaptation as well as James Cameron’s $2 billion “Avatar” sequel that has been 13 years in the making. As a strong proponent of going out to the movie theatre, I couldn’t have asked for a better lineup of popcorn cinema in 2022.

The horror genre also showed out in a major way this past year, with releases not only being fruitful fan favourites, but vast critical triumphs as well. Mia Goth and director Ti West were busy with the successful releases of slasher film “X” in March and its prequel story, “Pearl”, later in September.

Of course, Jordan Peele’s “NOPE” was a deeply unsettling extra-terrestrial spectacle that has cemented the comedian-turned-director as one of the most exciting filmmakers of his generation. We can’t forget about “Smile”, just a creepy, jump-scare-heavy good time at the movies, which earned over $200 million at the box office thanks to its viral marketing campaign of infiltrating public events with actors to just stand there and smile unnervingly without breaking character. It’s plain old spooky stuff that has inspired a similar marketing technique for the first major horror release of 2023, Universal Pictures’ “M3GAN”.

On a more family-friendly side of things, “Everything Everywhere All At Once”, a comedic and highly innovative take on the multiverse concept, blew my brain to smithereens when I first saw it in theaters.  “EEAAO” is an impressive technical achievement without a doubt, with its editing and costume design standing out, but its exploration of familial love (through the lens of its characters’ own nihilism) is also sincerely touching from beginning to end. The film’s integration of Asian-American identity is also a central theme and by that very nature has provided much-deserved opportunities for the hyper-talented Michelle Yeoh and Ke Huy Quan to fully exercise their acting skills. The pair recently took home the Golden Globes for Best Actress and Best Supporting Actor respectively in the Comedy or Musical category.

Steven Spielberg’s semi-autobiographical coming-of-age drama “The Fabelmans” is another crowd-pleaser to watch with the family, especially if you have so much as a sliver of the love for cinema as the young Sammy Fabelman (a character based on Spielberg’s young filmmaking-obsessed self). At its core, “The Fabelmans” is the moving tale of a childhood filled with parental unease and the love for film that was ignited and complicated as a result. That same childhood would bring us one of the greatest movie directors to ever do it.

Getting down to what everyone has been dying to hear about: my personal top three favourites if I had to rank them (I don’t have to – no one is asking me to). Foreign films “EO” (Poland) and “Decision to Leave” (South Korea) rank second and third as 2022 bests in my book. The former takes us on one donkey’s surprisingly heartrending journey through life, and the latter is a crime drama romance from the twisted mind of Park Chan-wook (I still haven’t forgiven him for the trauma of 2003’s “Oldboy”).

But my year was permanently coloured by one standout film in particular: “The Banshees of Inisherin”. Martin McDonagh’s masterstroke tale of ripping apart the ties that bind – a darkly comedic film despite the deep sadness that resounds throughout. I couldn’t tell if I would be laughing or crying at any given minute (I wept uncontrollably through the entire latter half of the movie and chuckled heartily between sniffles). The rural Irish landscape that soaks every scene sets an incomparably beautiful stage for Colin Farrell and Brendan Gleeson to play out their characters’ shared ruin. If you would have told me last January that my favourite film of 2022 would be a subtle tragedy about the friendship death of two over-the-hill men that acts as a metaphor for the Irish Civil War, I would have said, “OK, but how did you get into my house?”

Farrell’s indelible stamp on 2022 cinema doesn’t lean solely on the remarkable “Banshees”, though. Apart from this career-high, the lovable Irishman dedicated himself to major roles in three of the most critically acclaimed films of the year: Matt Reeves’ “The Batman”, the gorgeous and heartwarming sci-fi flick “After Yang”, and Ron Howard’s intense biographical survival/rescue drama, “Thirteen Lives”. I can’t think of anyone else who has had quite the exquisite 12-month run of that charming Irish lad.

All in all, if I had to predict this year’s major Oscar winners (which I have never guessed correctly), standout performances of the year that I suspect members of The Academy will gravitate towards are Cate Blanchett’s nuanced performance of the problematic titular character in Todd Field’s prestige character study, “Tár”, and Brendan Fraser’s poignant portrayal of severely obese recluse Charlie in Darren Aronofsky’s “The Whale”. I will say though, that if “The Banshees of Inisherin” doesn’t win Best Picture, I will absolutely succumb to Will Smith levels of aggravation toward every individual member of The Academy who voted otherwise.