Women’s Powderpuff Football team wins it all at Sheridan 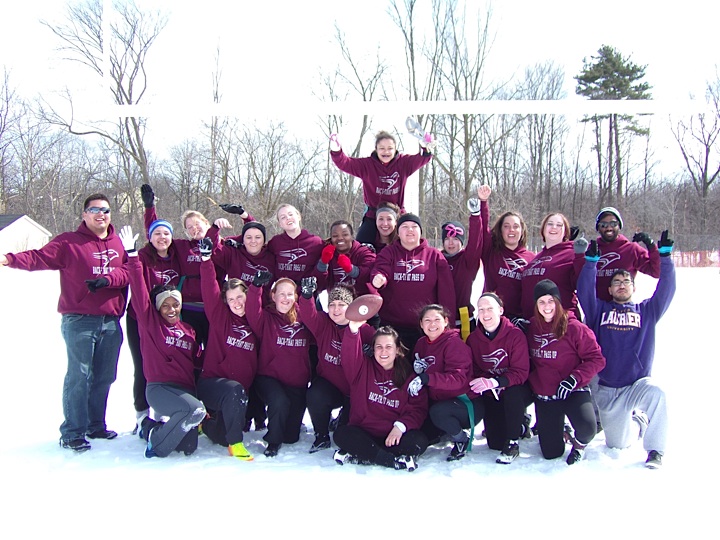 The Women’s Powderpuff Football team marched into Sheridan this past weekend and came out victorious, winning their first ever tournament. In the round robin the Golden Hawks finished 2-1, with wins against Sheridan, 6-0 and the Waterloo Rippers, 18-6 and a 3-0 loss to the Waterloo Shockers.

Their record got the team a bye into semis, where they faced off again with the Shockers. After the first half, the Golden Hawks were down 6-0. They tied it up, but missed the conversion. Nobody else was able to score, so the game was sent into OT. In Powder Puff football, overtime is played in sudden death – each time starts from the ten yard line. Each team has one opportunity to score, but if the second team with the ball scores, the game is over.

The teams went five rounds without breaking the tie, so the starting position was moved up to the five-yard line. Another five rounds went by until the women broke through for the win. “It’s probably one of the longest overtimes we’ve played in our lives,” Captain Alysha Emerson. Stephanie Rocha was instrumental in this victory, with a huge diving grab on the Waterloo player’s flag to prevent a touchdown.

In the finals, Laurier was matched up against Western, arguably the top team in Powderpuff Football. “[Western] have been in the final in every other tournament … so it was a little bit intimidating,” Emerson says. Western scored first to lead 6-0. For second straight game, Laurier went into the second half having to play catch-up. With a minute and a half left in the game Whitney Watts tied it up with a touchdown grab and with the conversion, Laurier gained the lead 7-6.

Western was losing when the final whistle blew, but Powderpuff rules state that Western would have five plays after time runs out to try and score. With one play left, Western was 15 yards from the goal line, but the Laurier defence stood strong and stopped a play in the endzone, to seal the victory.

It was even more impressive for the team considering they didn’t have a full squad. Players had to play positions they weren’t used to playing on both sides of the ball and by the final they were certainly sore and tired. “I just let [the team] know that it’s ‘one more game and that’s all I’m asking from you. Let’s finish as champions and leave it all on the field,” Emerson says. Having confidence is something that has been somewhat of a weak spot for the squad, so not letting the disadvantage of not having a full team or being down in games was a big reason as to why the team won. The skill has always been there, it was simply the mental hurdle that had to be overcome. “One thing I’ve tried to teach the girls is to not look at the score, especially at halftime,” Emerson says. “That was one thing that definitely changed this weekend … [The team] was focused on coming back and winning.”

Emerson hopes that this championship will legitimize Powderpuff Football on the Brantford campus and show the strength and commitment that exists for this team. Funding has always been an issue in order to participate in tournaments and “It’s kind of been a bit of a struggle between me and the Athletics Department this year,” Emerson explains. “I hope that [the school] seeing that we are capable and do have the skills that we’ll get more funding and support from the school next year.” If they can keep up their championship-winning ways, I don’t see why not.