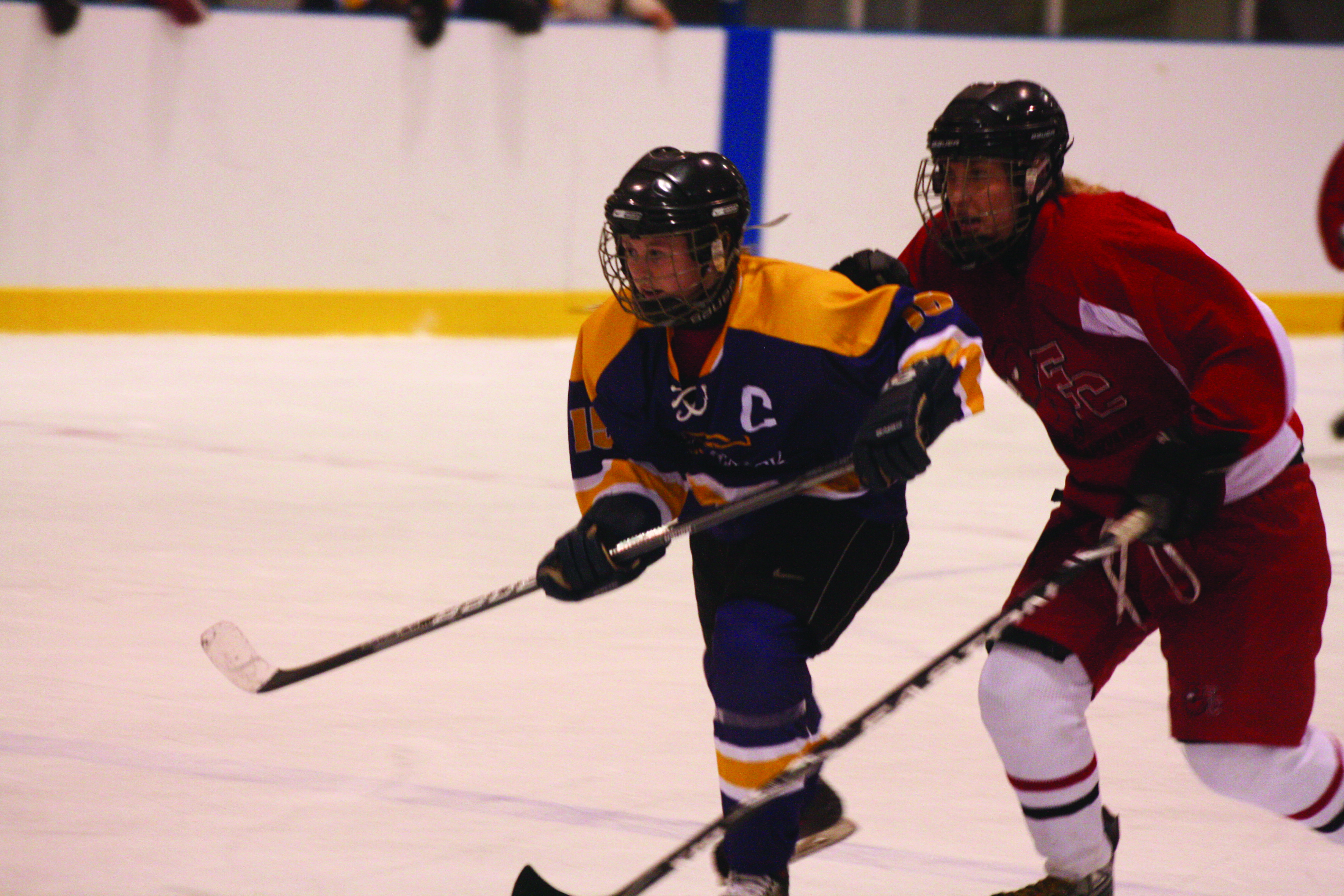 For the second time in two weeks Brantford was the home of extramural hockey. Last Friday the women’s extramural hockey team took the ice, hoping for a big finish like the men’s team had achieved just one week prior.

The ladies opened the tournament against Conestoga College. With their dominant play the girls were able to come out on top with a 4-2 win thanks to the great play of Kristin Cavarzan and Jacqueline Legere who both had two goals for the Golden Hawks.

In their second game, the Hawks were paired against Fanshawe College. The girls played a tight game, trading goals throughout and after regulation the two teams were deadlocked 2-2. The teams would play an overtime period, but after both teams failed to score during the period the girls were headed to a shootout. Unfortunately the girls fell after Fanshawe scored in the fourth round of the shootout.

However, game three saw the Golden Hawks bounce back against the University of Information Technology. Captain Brittany Howe and Shannen Head lead the way with two goals each and Erica Mathews added another as the Hawks took down U of IT 5-1.

After a rough fourth game against highly ranked St. Lawrence College which saw the girls lose 7-0, the girls had a chance to play for third place against Conestoga.

Having beaten them earlier in the tournament the team knew they could come out on top if they kept to their game.

“The girls knew we couldn’t take them lightly and didn’t want to go down after already beating them once earlier on in the day,” says Howe.

Fortunately for the Hawks they did just that, coming out on top 4-1 with goals from Shannen Head (2), Jordan Stephenson, and Brittany Howe, taking a third place finish in the tournament.

With the third place finish the girls joined the men’s extramural team in qualifying for the Challenge Cup, which gives them a chance to play against the league’s best. Heading into the tournament Howe really likes the team’s chances.

“I believe that every team that we play against is beatable for us and we just need to make sure we bring everything we have and leave it on the ice every game.” Howe says, “It would be great if we could win the first Challenge Cup for Laurier Brantford and the whole team is aiming to reach that goal.”

However both Cavarzan and Howe believe there are a couple keys to the team’s game that they could improve on. Cavarzan believes that working on the team’s conditioning could help in the next tournament.

“Since playing up to five games in a day can get exhausting, some extra conditioning will definitely improve our game play,” says Cavarzan.

While Howe believes the team could work on their passing and team play.

“I think that we need to continue to work on our passing and just being aware where one another is on the ice,” says Howe, “Both of these just take time and getting use to one another’s playing style.”

The girls will hit the ice at the Challenge Cup on March 14 and 15and with a few weeks until then to get prepared for the tournament, the girls will be getting ready to finally earn their spot among the league’s very best.