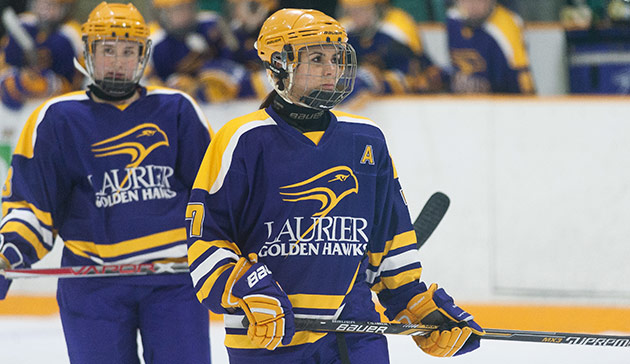 This year it won’t be the usual men’s varsity hockey team that plays for Laurier Brantford’s homecoming; it’ll be the women’s team.

On October 20, the lady Golden Hawks will be facing University of Toronto in their home opener at the Civic Centre in Brantford.

Having won 10 championships in the last 16 years while the men have won none, the women may finally be able to make their Brantford breakthrough at this homecoming game and appear in more homecomings in future years.

The Golden Hawks and Varsity Blues are likely to bring a tight game to the homecoming this year. Laurier’s head coach, Rick Osborne, remains optimistic about the scenario.

“Toronto’s been a rival since I arrived at Laurier,” said Osborne. “But our team always seems to be able to stay one significant step ahead of them.”

With regards to the homecoming game in particular, Osborne notes that the Blues carry the advantage of being more used to the small-sized rink, much like the one the Civic Centre provides. The Golden Hawks typically play on an Olympic-sized sheet of ice at the Waterloo Recreation Complex in Waterloo, ON.

In terms of the Blues’ strategy, Osborne says, “Toronto has excellent goal-tending and a very physical ‘hard-no’ playing style.”

But Osborne also says the excellent goal-tending goes both ways. From the Provincial Women’s Hockey League, Laurier recently recruited Cohen Myers of the Kitchener-Waterloo Rangers and Hannah Miller of the Stoney Creek Sabres. Between the two of them, they have six years of junior hockey experience under their belt.

This year will be phase of regrouping, according to Osborne. After suffering a 6-23-5 record, he described last year as a “disaster season,” but also a “team-building experience.” The team is looking to build back up to be the OUA champs they were for seven years in a row not too long ago. Their last championship victory was in 2014.

“We’re bigger and faster, so we’ll match up with teams better this year,” said Osborne.

One of the players he expects to carry the team is Emily Woodhouse, who is now going into second year. By the end of her first year with the Golden Hawks, Woodhouse had already made an appearance in 24 games, recorded 10 goals and claimed the team’s Most Valuable Player award.