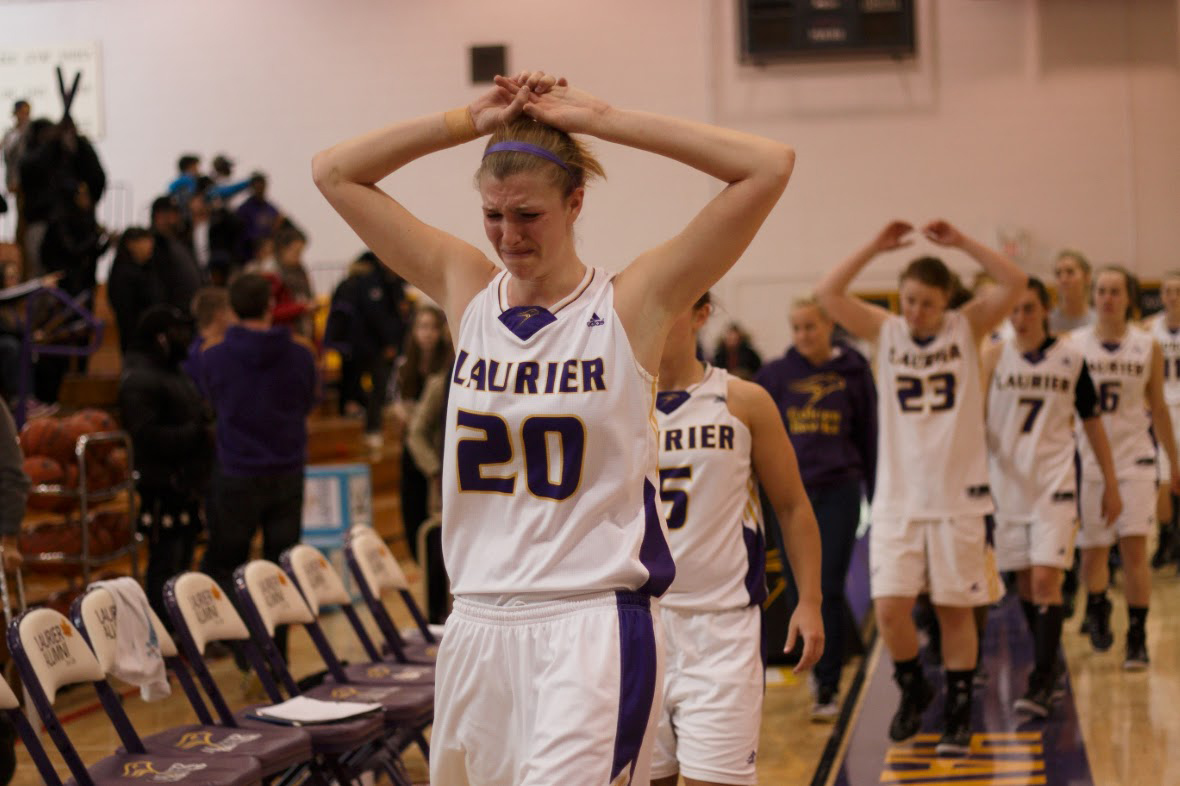 One of the best women’s basketball teams in Canada had their historic 2014-2015 season cut short on February 28 in a thrilling double-overtime upset at the hands of Queen’s University in the quarter-final of the OUA playoffs, 85-78.

The Golden Hawks entered Saturday as the sixth-best team in the CIS and were second overall in Ontario with a record-setting 17-win season, but they couldn’t overcome a late rally by the seventh-ranked Golden Gaels, who played the tenth-ranked Laurentian to setup the matchup with Laurier on their home court.

Coach Paul Falco and the Golden Hawks knew going in that if Queen’s was able to beat Laurentian, they were going to be a difficult matchup. Back in November the purple and gold held off the surging Gaels for a very close 56-53 victory. “We had a really tight game [against Queen’s] down in Kingston … they’re definitely one of the more experienced teams in Ontario. They’ve played some top teams really tight,” Falco explained.

Coach Falco stressed the need for consistency. “Defensively and rebounding we’ve been solid throughout the year, but we’ve had lapses that have cost us,” Falco said. Laurier would find themselves in some games during the regular season having to play catch-up after getting out to big leads or they would narrowly escape big comebacks. Lapses like these came back to bite the Golden Hawks and ended up being one of the major reasons for the team’s loss on Saturday.

On two occasions Laurier had 14-point leads against Queen’s, but the Gaels were able to battle back on both accounts, once thanks to a 20-2 run to enter the fourth quarter, but as Laurier has done multiple times during the season, they clawed their way back into the lead. “We had a tough time [during Queen’s 20-2 run]getting someone to get a shot to drop … We’ve been pretty resilient all year that way and when we’re in trouble we’ve bounced back,” Falco said.

Laurier’s resilience led to two late opportunities to put the Gaels away; once in the fourth quarter on a last second shot by Nicole Morrison and once in the first overtime period on a last-second three-pointer taken by Kaitlyn Schecnk, but neither shot hit the mark.

The usually sure-handed Golden Hawks also struggled with turnovers in the quarter-finals, committing 24 turnovers which resulted in 26 points for Queen’s. “We’ve been pretty good [at limiting turnovers] most of the year, but we had a bad spurt in the second half, so that didn’t help,” Falco explained. “But Queen’s hit some big shots so we have to give them credit.” Most of the shots came from Queen’s guard, Jenny Wright, who had a game-high 24 points on 56 per cent shooting.

Laurier is going to have an uphill climb to get back to the quarter-finals next season as three key players, including 6’3’’ centre, Whitney Ellenor. As Falco explained, there’s very few players in women’s basketball who has the combination of size and skill that Ellenor has. “Every year that I’ve been here we’ve lost people due to graduation and every year we bring in new people and the pieces to fit to play a new style,” Falco said. If Laurier isn’t able to recruit any players of Ellenor’s size in the offseason, Falco wants to continue to stress a fast-paced transition-style of play that they’ve worked on in the past couple of seasons.

Looking forward, the question marks exist, but as Falco looks back at the season, overall he was really impressed with how the team played. The one game playoff exit was a disappointment, but the women met some of the goals they set out to achieve going into the season. “We have to remember that we had a great regular season with some significant records for the program and pushed the bar even higher,” Falco said. “It’s the nature of sports – sometimes things just don’t go as planned and you have to deal with the disappointments when they come.”