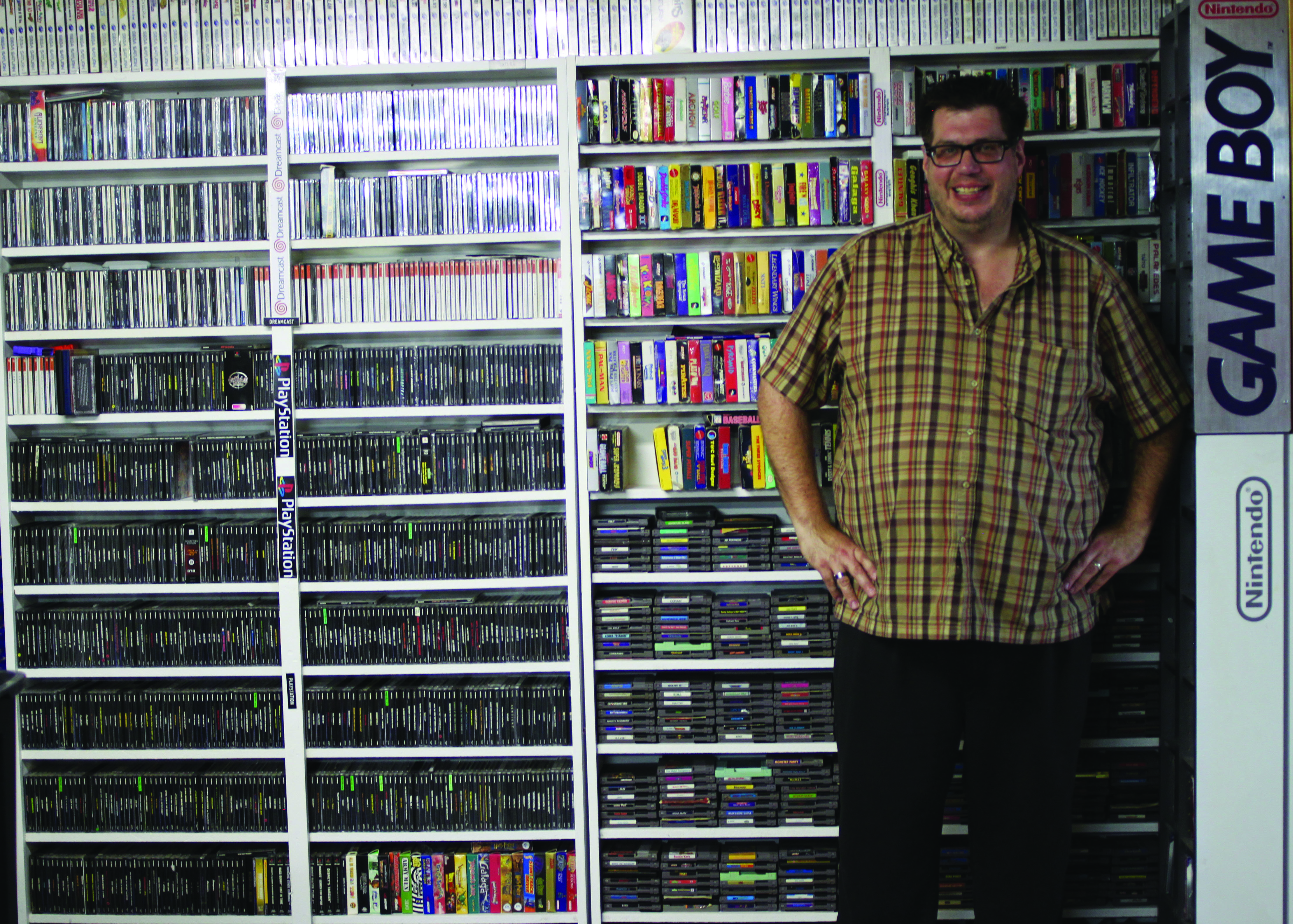 Walking up to 13 Alma Street in Brantford Ontario, a typical bungalow seems nothing but ordinary. The garage door is wide open, but it’s not a vehicle that takes up the space. Boxes and boxes of old computers, computer parts, games, modems, just about anything computer or video game related, lay across the floor: donations.

Bolton has three important cycles to consider when going through donations. First of all, does it have historical significance? This ordinary bungalow is not the only building housed at 13 Alma Street.

Around the left, the driveway wraps the side of the garage and leads to a gated fence. Within, a white pathway cuts through the back yard to reveal an obviously older, bricked building; white painted bricks reclaimed from the Brantford opera house years ago.

Inside, old computers board the main floor, all fully operable. Long tables stretch across the middle of the room, also double sided with computers. The far right wall reaches to the roof, past the second floor, shelving complete with computer games.

One such computers holding historical significance props in front of this never ending computer game wall, the IMSAI 8080. Holding the place of Bolton’s oldest computer, this one was manufactured in 1976. The IMSAI 8080 looks something like an old time recording device you would see in a radio station in the 60s. Large switches run across this rectangular box and flick up and down like a light switch, not the standard picture in your mind when you think: computer.

The second phase to consider for donations is whether or not this item can be refurbished and given away to someone who needs it. Bolton donates regularly to Nova Vita Women’s Services, giving women who have suffered repercussions of domestic abuse refurbished computers that could assist them in getting back on their feet: offering the ability to search for jobs or alternative places to live. Bolton is very connected in the community, he also keeps an eye out for families that may be in a situation of multiple children vs. one computer. Never a safe battle to face in this day and age.

“Computers sort of set me on the path of life, you know? I know a lot of people that still don’t know what they’re meant to do in life and when I first got introduced to computers when I was ten years old, that was at a time when not everybody had one, and they were not common place as they are today. And so, something about them clicked with me. But along that journey video games have always been a part of that.”

Back to the white pathway, out the wooden fence gate, a sharp left brings us in the garage side door. Straight across a set of stairs step down to a room on the right. But wait, don’t look at anything. There’s an organization to Bolton’s madness. Past this room leads to another, which leads to a kitchen, which leads to an arcade room. On the right two little Bichon Frise yap their way down a staircase, shaking their little bums with excitement, their tails whipping along. Coleco, the oldest and Atari, the puppy – both named after game systems of course – search for kisses, head scruffs and sips of Bolton’s coffee. While Bolton’s baby girl, Odyssey – also a Bichon Frise named after a game system – lay upstairs with her mommy, Bolton’s wife Jenny.

Space Invaders, Pac Man, and Jungle Hunt are just a few of the operating arcade games in this tiny little game room, waiting for the exploration of curious gamers. Dragon’s Lair was Bolton’s most favourite arcade game, influencing enough that he published a book “Collecting for Dragon’s Lair & Space Ace” in 2013. Featuring all there is to know about these two games, this 170 page book captures the sleek look of a comic.

“You know, it may seem like, because I have this computer museum out here as a separate building that it would be computers, but honestly, I’m more passionate about video games,” explains Bolton.

Which brings us back to the first room we began with by the stairs to the garage: yet another game room. A patterned couch faces a TV, more and more games line shelving around it.

“I have heard in the last five years, hundreds of people say that they aspire to be like me. Which is weird. Right? It’s weird,” Bolton says. “I don’t know, I just am a guy that is collecting video games, computers and whatever.”

When Bolton first began collecting video games everyone thought he was crazy. Why would he want that old piece of junk? They would think when replying to Bolton’s classified ads asking for old game systems in his teenage years. $20, easy money they would think when selling their Magnavox Odyssey game system: the very first commercial home video game console.

“I never would have thought when I started that I’d have people say ‘well you’re an inspiration for my collection.’ I never thought I’d be in a movie about video games.”

In the past year and a half Bolton is feeling the pressure, the competition is on. Now geeks and nerds are in, they are chic and cool, much different then the weird high school Bolton the girls sent judging glares at. Game collecting has become a new way of reliving your childhood.

“Now I’m thinking, well I don’t want to be the guy that had the lead and lost it,” admits Bolton. Although this anxious competitive side has taken Bolton off-guard, he will still always pop whoever a text if he comes across something he knows they are looking for to add to their collection.

It’s a new world out there, a gaming world. And Syd Bolton is prepared to die trying to collect it all, every game, every version, for every system.