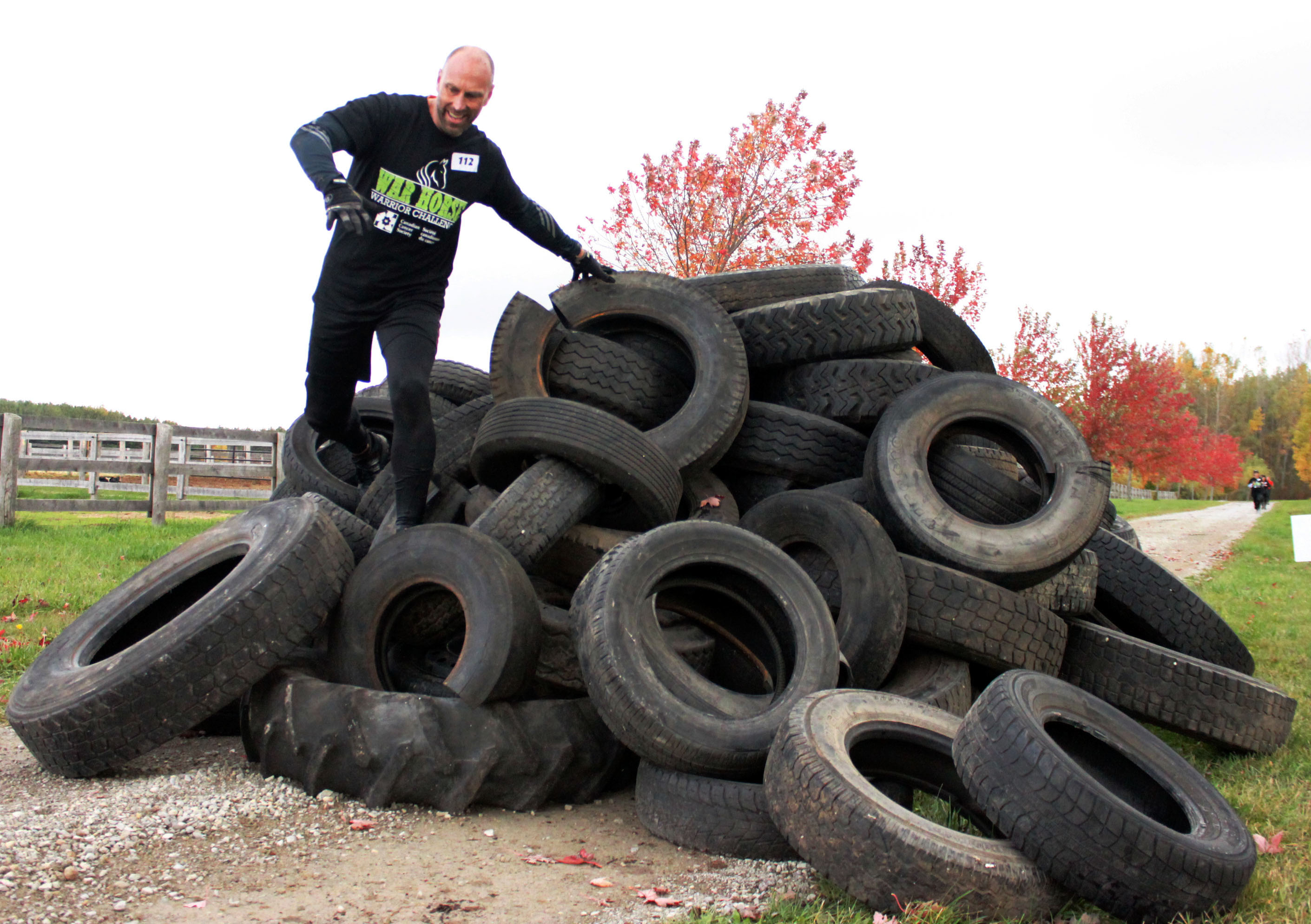 On a chilly, yet sunny Saturday morning, runners showed up at the Southern Cross Equestrian Academy in Burford, Ontario to participate in the War Horse Warrior Challenge Obstacle Course Mud Run. The name is a lengthy one, as was the course that the run took place on, taking runners into forests, over ponds, and through mud pits.The mud run certainly lived up to its name with the majority of contestants crossing the finish line caked in mud, or drenched from the “Pond Crossing” obstacle, in what was Brant-and-Norfolk County’s first mud run.

The mud and the rain couldn’t stop the beaming smiles of people crossing the finish line with their teammates. Team after team ran, walked, or leaped over the finish line with triumphant smiles after completing the five-kilometre course. “It was just as muddy as I expected, and just as challenging as I expected. It was good, I’m glad we got to do it,” recounted Brad Wood, a member of the “Cancer Crusher Heroes” team. “My whole team ran for somebody; we all ran for someone that passed away from cancer. Just to raise the money alone, and to come out here and be with the family and friends – it was a good day.”

As Wood explained, the point of the mud run was not to simply get muddy and run five kilometres; the race was a fundraiser for the Canadian Cancer Society, which is involved in both cancer research and the support of cancer patients. Individual runners and teams raised money for the CCS, most of which will go towards local initiatives by the organization within the Brantford area. Among other projects, the money will support cancer research, a shuttle service which brings patients and their families to and from treatments, and a cancer information hotline that assists newly-diagnosed cancer patients with any questions they may have.

When registration and online donations closed on Thursday evening, $22,743.30 of the original $40,000 goal had been donated; however, upon commencement of the race, the total had reached the goal, and was still climbing*.

Vanessa Janzen, the lead organizer of the project, was extremely happy with how the day turned out, but was quick to point out the efforts of the volunteers who worked hard to make this day a reality. Volunteers were at every obstacle along the way, guiding runners through the course, and cheering them on as they ran. They were also integral to the post-race festivities, which included food, drinks and live music.

After the adult heats had run, all heads were turned to the kids’ course, which was a more condensed version of the course that the adults had run through. The 1.5-kilometre kids’ course had two age groups participate: one of eight to 10 year olds, and one of 11-13 year olds. Both heats started off by telling the kids that they were warriors; and warriors they were indeed, running in colder and rainier weather than the adults while getting just as muddy.

According to paramedics on the site, there was just one minor injury despite over 200 participants in the race, and everyone was allowed to complete the course at their own pace. At the end of the day, the inaugural War Horse Warrior Challenge was a huge success, and promises to be even muddier and more challenging next year. Thanks to the warriors who completed the race, more than $40,000 will help the Canadian Cancer Society in funding local and national programs and research to help those affected by all forms of cancer.

*Information on final donation totals can be found on the event’s website later this week.