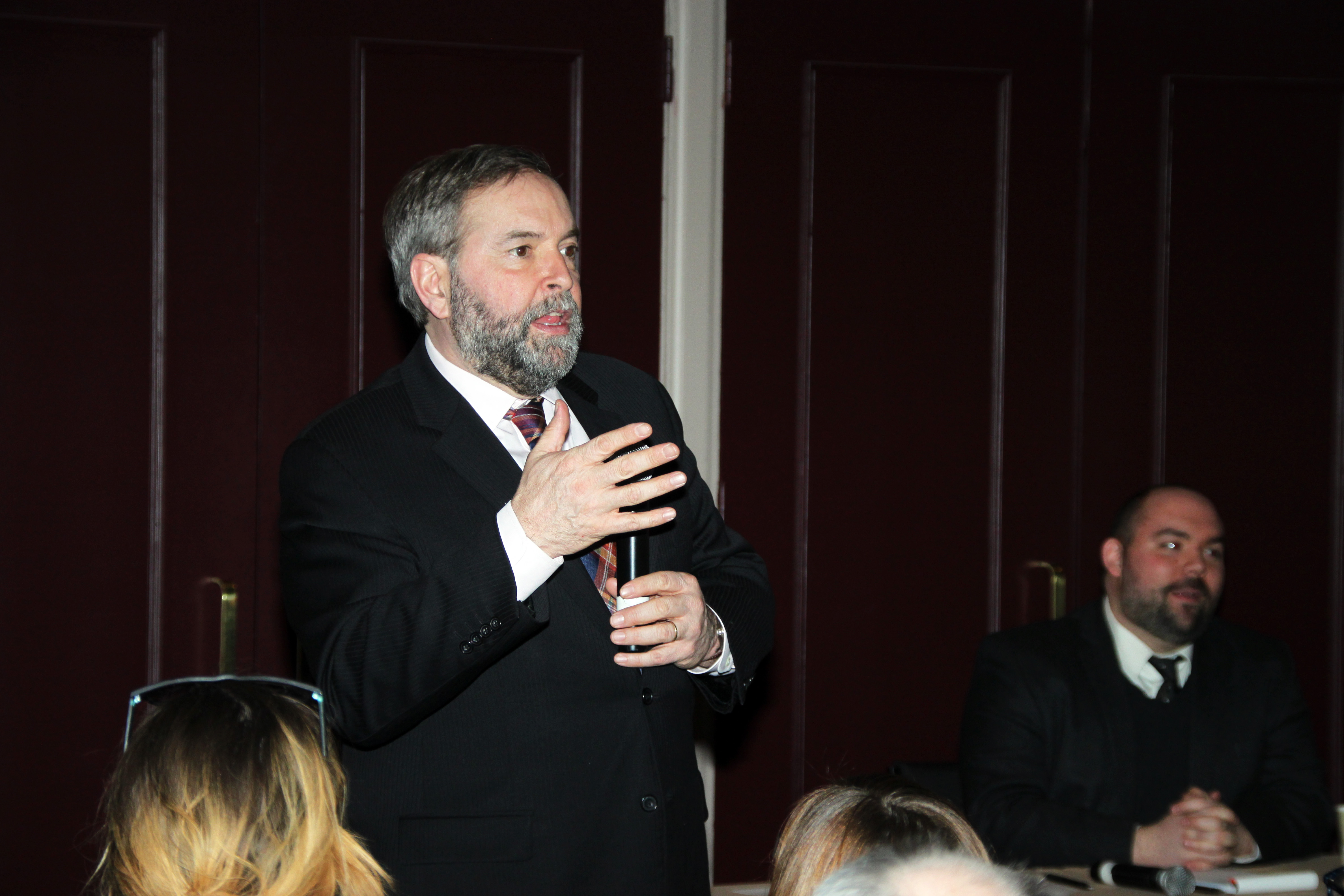 On Tuesday evening, leader of the NDP, the official opposition, Thomas Mulcair, addressed a hall full of Brantford residents.

After a full day of visiting within the GTA, furthering the NDP’s affordability campaign, Mulcair stopped in Brantford to speak with local residents inside the Sanderson Centre. He promoted the campaign’s biggest factors: environment, society and economy.

With more than 150 people present in the town-hall type meeting, Mulcair boasted the NDPs commitment to change through legislature regarding gas prices and ATM fees.

“It’s time to have someone standing up for [the public],” said Mulcair to a room full of supporters. “And that’s the NDP!”

Mulcair continued to explain his party’s view on fees imposed on the working people of Canada. Through a series of political tours across Canada over the past months, Mulcair claims he came to a conclusion, “These are the issues. That’s what Canadians are talking about. That’s what we’re talking about.”

During the open-question period of Mulcair’s town hall meeting, locals brought forth their concern with First Nations land disputes and pleaded with Mulcair to provide change. According to the Brantford Expositor, Charles Mart, 69, told the NDP leader “between now and the next election, go through all those omnibus bills and find all the sneaky little things that the Tories put in them.”

“We deserve another choice,” said Mulcair to an attentive audience, “between switching from Conservative to Liberal economic corruption.”

“Only the NDP is going to stand up for you.”

In the 2011 federal election, Ontario voted in 22 NDP candidates, out of the 106 seats Ontario politicians gained in the House of Commons.

On Wednesday morning, the Ontario government announced that it would be improving public transit by adding more GO Train and bus trips throughout the GTHA. “Our unprecedented public transit investments are making transit a better choice for commuters,” said Glen Murray, Ontario Minister of Transportation. “Reducing congestion on our roads and contributing to a better quality of life for Ontario families.”

Marc Laferriere, federal candidate of record for the Brant NDP, attended the meeting, showing his support for Mulcair and his efforts in the Brantford community.

“I’ve spent a lot of time with Tom Mulcair,”said Laferriere. “Tom will be the best Prime Minister we’ve ever had … I’m going to work tirelessly to see that happen.”

“We know who we are, we know whose side we’re on,” said Mulcair. “That’s what scares them.”

During the meeting on Tuesday, Mulcair raised the resignation of Finance Minister, Jim Flaherty on Tuesday – this was met with loud cheers. On Twitter, Mulcair sent a tweet in French and English saying: “Thank you @JimFlaherty for many years of public service. Ndp.ca/ozc”

The statement attached in the tweet included the words, “Despite our disagreements about the best way to manage Canada’s economy, I have always respected Mr. Flaherty’s commitment to serving our country.”