The student body as a canvas 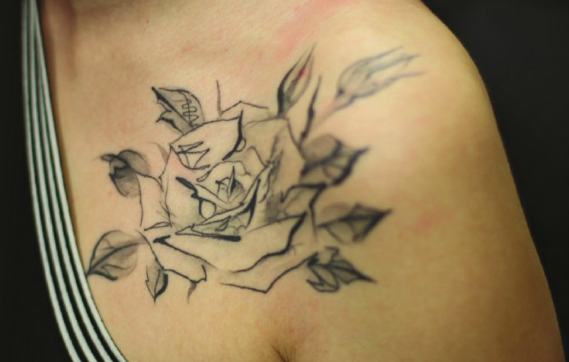 One reason people have been engaging in tattoos for centuries is because they are seen as a work of art. The human body becomes a canvas and portrays artwork through stories and meanings, reaching out to inspire many, such as the students here at Laurier Brantford. 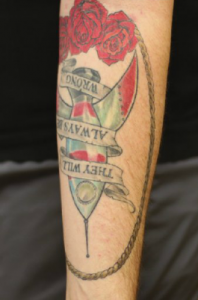 “Growing up I was always bigger than the other kids. In grade four and five I used to get picked on a lot and during that time I used to listen to a lot of music to escape. I listened to a lot of Kid Cudi and his album, Man on the Moon which was a story about his own battle with depression and feeling alone, which was how I felt. That’s where I got that rocket inspiration from. It represents me inside of that rocket ship blasting off. There was also an anti-bullying video that came out – at the time I was 16 or 17 – one of the things that stuck out to me was the phrase ‘They will always be wrong.’” 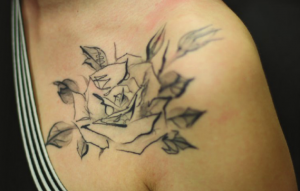 “For a very long time I thought I couldn’t get a tattoo because I didn’t have anything meaningful I wanted to put into a tattoo. I just wanted to get something pretty and I thought that was silly but the longer I thought about it I decided, ‘no that’s not silly, it’s a piece of artwork on my body that I can appreciate.’ Like everybody else would do, I had a Pinterest folder of all my favourite tattoo ideas, which I would constantly look at and add to and at the same time I was looking for an artist I liked. While I was looking I found an artist named Lemur and he worked at a parlour called Seven Eight in Toronto and his work is just gorgeous.” 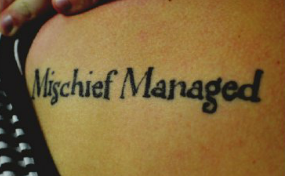 “The tattoo is sort of like a puzzle, I got it for my seventeenth birthday. My mom has the second half of the tattoo on her thigh. My girlfriend got a mother-daughter tattoo and I thought that was pretty cute. So I got one with my mom but I wanted it to be different because I didn’t like the really girly mother-daughter tattoos. Ours is from the Harry Potter series. Hers says ‘I solemnly swear I’m up to no good’ and mine says ‘mischief managed.’” 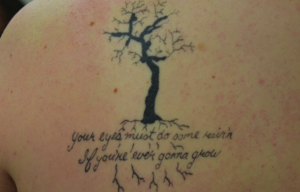 “I was mostly cataloguing positive experiences with my previous tattoos but I got to this point in my life and something negative happened to me. I felt completely lost and didn’t know how to continue my journey. The words surrounding the tree say ‘your eyes must do some rainin’ if you’re ever going to grow.’ The tree on my back is an ash tree, symbolically the Norse people thought it to be a tree of wisdom. The tree also has no leaves on it and that is when a tree is in its most vulnerable state. This tattoo was me coming out of the negative. The quote is from a Bright Eyes song called ‘Bowl of Oranges.’“ 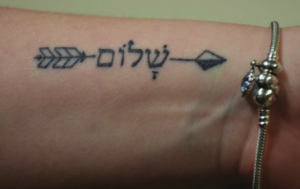 “The writing is in Hebrew and it means ‘shalom.’ It means peace and balance … which is important to me because I’ve struggled with anxiety. The arrow means going forth and all it signifies you must be pulled back before you fly forwards. Together it means that there needs to be a certain balance before the arrow can fly. My family is Christian so my tattoo has that connection between Christianity and Judaism.” 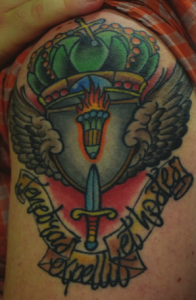 “This is my family crest, I got it for my dad who passed away a couple years ago. It has elements from our heritage: it has the Hungarian crown in it, it has the colours of the Irish flag, it has the family motto which is ‘Tenebras expellit et hostes.’ It’s ancient Gaelic and it translates into ‘we drive forth the darkness and the foe.’ I had to find pieces of the crest, I had to do my fair share of research which lasted four to five months before I went out and got it. I designed it myself along with the supplementary historical pieces.  The tattoo let me connect with my dad and my family heritage.”