The strange process of becoming a Lebron fan 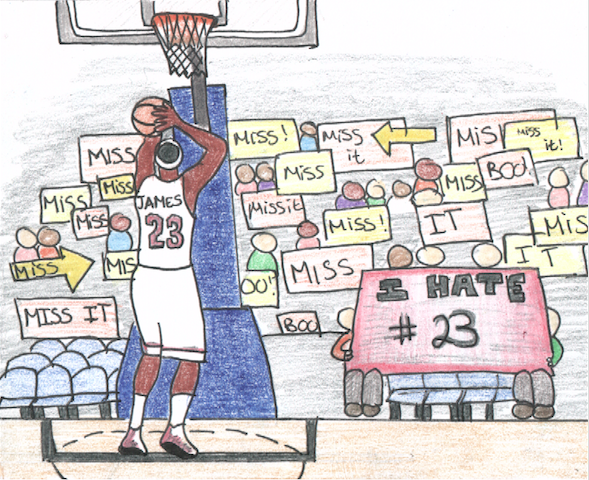 Something completely out of the ordinary happened during the course of the 2015 NBA Playoffs.

This phenomenon did not happen all at once, and it was probably not as noticeable as any of the aforementioned moments, yet it was certainly just as, if not more, noteworthy.

The most interesting storyline of the entire NBA Playoffs was the transformation of the public perception of LeBron James.

One of the players who sports fans love to hate, for whatever reason, became one who most fans came to root for as the playoffs, and his championship hopes, dwindled.

I’ll be straightforward from the top – I’ve never had a LeBron problem. I tend to have an appreciation for almost all ultra-talented athletes—I can set aside most conflicting personality quirks in order to appreciate the fantastic athletic feats that these players are somehow able to perform.

As such, I cannot personally say that the transformation was one that I experienced, but I was certainly witnessed it.There are plenty of reasons that fans of the NBA and fans of sports have for hating LeBron. It may be his self-proclaimed ‘King’ status, his decision to leave Cleveland, or even his decision to leave Miami and return to Cleveland, as well as the manner in which he made those decisions.

Some people are just sick of the seemingly endless ‘King James’ coverage that floods ESPN broadcasts, and others are upset about the comparisons to Michael Jordan as the greatest to ever play the game.

For whatever reason people hated him, though, LeBron’s inspired battle through the 2015 NBA Playoffs made him a hard man to root against.

For some, it was simply the task which was before him that made it possible to cheer for LeBron. The city of Cleveland has not had a single professional sports team win a championship over the course of 143 combined seasons, and as a result it was hard to root against Cleveland as a team from the very beginning.

That 143-season drought is 36 seasons longer than any other city in North America, and it’s been headlined by numerous crushing defeats, including the four-game sweep of the Cavaliers in the 2007 NBA finals.

Regardless of how you feel about the way LeBron handled his first departure from Cleveland, his return was admirable and was a great thing for the city. Cleveland was due for a championship, and LeBron returned to bring them that.

For others, it was the adversity that led to LeBron having absolutely zero help down the stretch of the playoffs that made it possible to root for him. It was just one round into the playoffs when the Cavs lost Kevin Love, the team’s third-highest scorer and leading rebounder in the regular season.

Kyrie Irving, LeBron’s second-hand man in Cleveland, suffered through injuries throughout the playoffs. Irving, who was second on the team in points and assists, and first in minutes played and steals, missed seven games in the playoffs, including the final five.

Down the stretch, the Cavaliers were reduced to a skeleton of their original depth and LeBron was on an island against a very talented Warriors team. No matter how much you can’t stand a player, it’s human nature to root for the underdog; and for once in his life, LeBron was the underdog.

Even as an underdog in the Finals, LeBron nearly averaged a triple-double; he only averaged 8.8 assists in the series against Golden State to go along with 35.8 points and 13.3 rebounds per game. He gave every ounce of his energy, but there just was not enough talent around him to carry the team through.

If it wasn’t for the sake of Cleveland or that he was an underdog for the first time in his life, perhaps it was finally seeing LeBron humbled that brought fans over to James’ side during these playoffs.

Maybe for some people it didn’t sink in until seconds before the final buzzer, when a visibly crushed James congratulated Steph Curry on the win and walked off the court with his head down.

Watching one of the greatest players of all time walk off the court, with his shoulders slumped in total defeat, it was as if at that moment, LeBron was finally human.

So much of what he does on the court and the media coverage that he receives makes James out to be this otherworldly character. This ‘other’ characteristic is what can make it so easy to hate LeBron. It makes him seem distant and intangible, and it was this humbling moment that temporarily broke that barrier.

Whether it was the motivation behind his championship desire, the incredible effort he put in, or the human side of LeBron that was on display, it is hard to deny that he became an easier player to root for in the 2015 NBA Playoffs.

There’s no telling if that will continue into the next season, and it doesn’t have to, because for just a few games, or even a few minutes, some people were finally able to just appreciate the basketball talent of Lebron James.