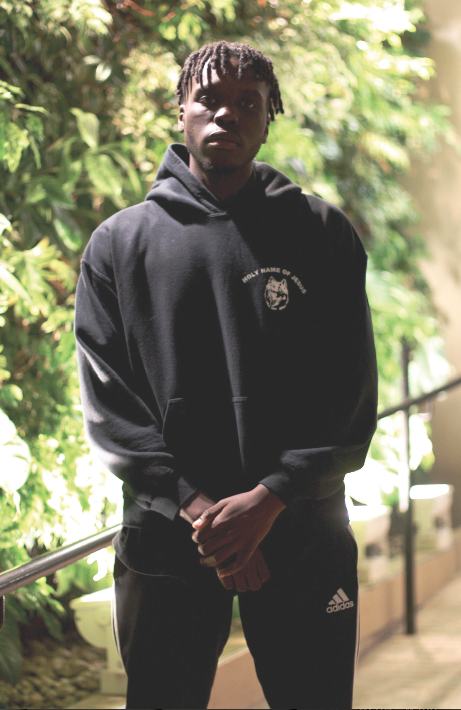 The Featured Artist is a Laurier Brantford student who is constantly striving for creative and artistic excellence. The medium isn’t what’s important; it’s the art. This week’s featured artist is Paul Gübek a.k.a. Pizzy Only.

How long have you been rapping for? Do you have any other musical outlets or talents?

I’ve been rapping since around grade 11 so when I was like 16 but I’ll say it didn’t turn into something serious until I was like 18 years old. I don’t really have any other musical talents but I’ve got an amazing ear for good music.

Who are some artists that have influenced you in the past?

Artists that have influenced me in the past… Definitely A$AP Rocky, Kanye West, Kendrick Lamar, Pharrell, Tyler, The Creator, Curren$y, Wiz Khalifa , Nas, Jay-Z, Mos Def I can go on forever.

How about now? How have these influences changed over the years?

Now I’d say all those guys are still my influences but the only difference is the list gets bigger, I’ve opened up my horizon in Hip-Hop so much in the last three years… I get influenced by Migos now, Skippa Da Flippa, Chief Keef, it’s all over now.

How do you go about picking beats? Do you have beats made for you or do you hunt for them online?

With beats now I’ve got so many people online e-mailing me their beats to use and all so I never really have to search for beats but their will be times when I message some good producers asking for a beat and all. I used to really hunt for beats back in the day before I was really known but yeah now they just come to me.

I listened to your mixtape “DeathXDon’tXDiscriminate”, it had a lot of depth and some pretty heavy themes in it. What made you want to share this with the world?

Well the story about DDD (DeathxDontxDiscriminatex) is actually pretty funny. Most of the stuff I talked about in DDD did actually happen to me and it was stuff I was going through, I recorded the tape and made all the songs around the beginning of 2013 but didn’t drop it until the end of 2014 just because I didn’t know if I was ready or not to have people listen to it. You said it yourself, it was a heavy tape with some heavy themes which in turn was my actual life, I didn’t know if I was ready to have people know all that stuff about me. After really convincing myself in life that I truly really didn’t care what the fuck people thought about me, that’s when I knew I was ready to drop the tape. I think it got a pretty good review and I still enjoy it today.

I saw that you’ve linked up with A$AP Ant on one of your latest tracks, “KEEPROLLiN”. How’d did that colab come about?

Yeah yeah, “KEEPROLLiN” was a big track for me, I had a song on DDD called “Yeezus” which was actually over one of A$AP Ant’s beats, he followed me on twitter for awhile so I decided to hit him up and see if he fuckeded with the song, he replied saying it was crazy and that he really liked my style so of course I hit him with the “we should make a track sometime” and the rest is history.

How’s the feedback been on it so far?

Feedback been great for that song, Ant reposted it on his Soundcloud and the plays starting flooding in, it’s helped my name that’s for sure.

How do you think your style/process of making music has changed since you’ve started?

Oh my style has changed so much, i started making really slow music when I first started out, you could even consider it love music ahah that’s still really the music I listen to now though. The music I make now though is so different, I wouldn’t even know how to explain what it is… Anger, survival, man I’m not even sure aha.

Can we expect any new projects from you anytime soon?

Have you been touring at all? If so, where have you been, if not, where are some places you’d like to perform?

Haven’t been doing any touring at all I’m not gonna lie, with school and all I’m kinda held back but I’ve got plans coming up so I’m not too worried, some places I’d wanna go is definitely New York, Miami, Atlanta, L.A. and a European tour, I’ve heard the girls there are A1 ahah.

What would be your dream collab feature wise?

My dream collab would be with the legend himself Kanye West no question… Oh man I’ve been preparing myself for that song for a long time now aha.

How about producer wise?

A dream beat I’d wanna get would be from Pharrell or Mike-Will Made It, my favourite producers right now

Is there anywhere people can listen to your music?

Yeah people can check out my latest music on my Soundcloud ‘Pizzy Only’ and watch for my youtube page for some new videos that are in the works as we speak. Don’t forget to follow me on Twitter, Instagram @PizzyOnly, for all of that good stuff aha.