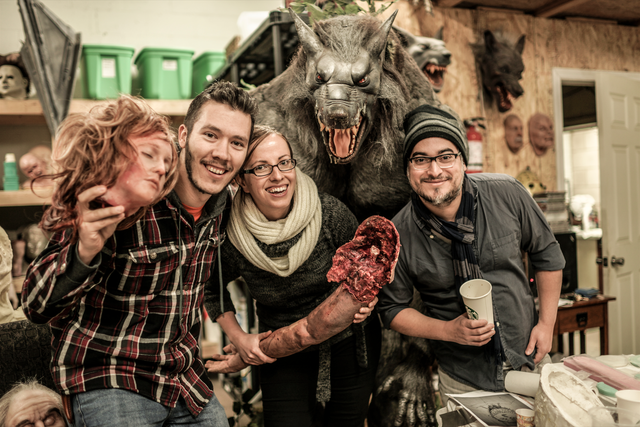 For anyone who may not know, can you introduce yourself to the readers and state what you do?
My name is Jodi Cooper and I’m an independent filmmaker of both documentary and scripted narrative films. I like to be involved with projects from the ground up (conceptualization to completion), but sometimes I freelance for one specific element like editing.

When did you graduate from Laurier Brantford and what did you major in?
I graduated in 2012 from the Contemporary Studies program with the Media Studies option. I understand this program is now called Society, Culture and Environment.

How did your time at Laurier Brantford influence your your work process? Did you meet any cool people or make any good connections?
I definitely feel that my time at Laurier influenced my work. It was my first opportunity to create a documentary on my own for one of my classes. I also made connections with fellow students and faculty that have led to freelancing work.

Have you been back to Brantford since you’ve graduated? If so, how has it changed?
I did manage to take a tour of the campus a couple of years after graduation and was excited to see a number of new updates to campus buildings.

What made you want to be in the movie industry?
I think I’ve always been a storyteller at heart and films are just one way to tell interesting visual stories.

When one thinks of the movie industry, people usually think of meccas like Hollywood or New York. What keeps you in Ontario?
Having been born and raised in Ontario I feel a real connection to this place and I’m excited to learn that films can in fact be made here. Eastern Ontario in particular is filled with so many creative individuals, industry professionals, and beautiful locations, until there is a reason for me to go to one of the meccas like Hollywood, I will continued to make films here at home.

What made you want to write a movie about Bigfoot?
The story actually started off as a straight up survival in the wilderness film. Bigfoot didn’t come in until later, but now we couldn’t imagine the film without him. Bigfoot is such a cool character and there is a lot of rich history surrounding the legend.

In the press release, it’s mentioned that The Woodsmen is going to be “THE BEST BIGFOOT FILM EVER MADE”. Why is The Woodsmen going to be different from other big foot films?
In the past Bigfoot has commonly been portrayed as comical and even goofy. In “The Woodsmen,” Bigfoot is a terrifying, methodical, wild creature that these four friends stumble upon in the woods. We’re not going to shy away from showing our interpretation of Bigfoot, which is really rare in Bigfoot movies that usually rely on mysterious lighting and shaky camera work to hide him. We believe that fans want to see him in all his glory. This is why we’ve teamed up with The Butcher Shop Makeup FX Studio. They have extensive experience creating realistic looking creatures that we won’t have to hide in the shadows.With Vantage Point Media House’s expertise in outdoor productions, I’m very confident we can reach our goal of making “The Best Bigfoot Film Ever Made”. See what did I tell you? There isn’t anything that you could want or need to make a film that you can’t find in Ontario.

So you work on films with your husband Victor; how do you feel that affects your process compared to if you worked by yourself?
In all honesty Victor makes sure I get things done. He says the same about me, so I think our working relationship keeps us accountable to someone so that our projects actually come to life. When you’re a creative person it’s so easy to have a lot of really great ideas that never go anywhere, finding the right partner to keep you moving forward is invaluable. Together we’ve founded Five Year Plan which has grown from just the two of us to include Rob Howsam and Kirsten Wight who were both involved in Mercy as well.

When writing “The Woodsmen”, how was it in comparison to your other pieces of work?
The Woodsmen is our first feature script so right off the bat it’s been a lot more work from the very beginning. More writing and rewriting, and that’s even before we started planning for production. The bigger the project the harder it is to stay creative, when you start all the “real world” processes of number crunching and scheduling, so it’s definitely been a rewarding and challenging experience to keep up the momentum.

You produced the short horror “MERCY”, which ended up doing well. What are some of the noticeable differences between writing a film and producing it?
Victor and I actually co-wrote Mercy as well so there are a lot of similarities between the projects, they’re both Five Year Plan projects. With a short it’s a lot easier to envision something, get a lot of value on the screen in a very short amount of time and then sit back and enjoy when there is audience response – which we’ve been very lucky to have with “Mercy,” as it travels around the world to various festival screenings. With a feature film there are certain elements that are just scaled up (exponentially), but there are also brand new elements. A feature is a bigger investment for the audience, so you really have to carefully consider what you’re asking of them and what you’re offering them in return.

So “The Woodsmen” is going to be filmed on Red Dragon cameras, which are pretty top of the line. How did it feel to have those on the set? Are there any other cool pieces of equipment that helped “The Woodsmen”
come together?
“The Woodsmen” is actually slated to start filming later this year, all that’s been completed so far is the teaser trailer to build excitement. We did shoot the teaser and Mercy on Red cameras, which has been amazing, the image quality has been fantastic. It can also be a little nerve wracking at times to be working with such expensive equipment. There are definitely times on set when we’re saying “Don’t get any blood on the camera!” or “Make sure you’re back far enough when they swing the axe!”

Is there anywhere that people can check out your work while waiting on The Woodsmen?
Mercy is still playing the festival circuit so it won’t be available for a while yet, but people can definitely checkout The Woodsmen YouTube channel. We’re making a number of short behind the scenes videos as we go to keep fans in the loop. They can also check out the Five Year Plan Facebook page and they can find out more about the production company Vantage Point Media House.

1 thought on “The featured artist”