The debate between feminism and inequality 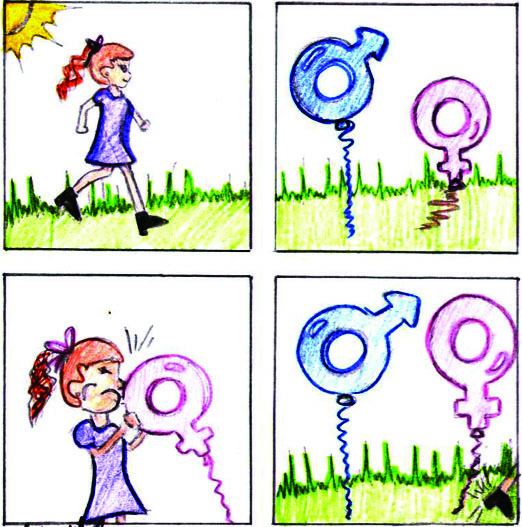 From generation to generation, there have always been people that have had to deal with inequality. Whether it involved colonization, voting rights or employment the topic of inequality has always been a current subject. What words come to your mind when you think about inequality? I’m sure feminism is a word that most of us are familiar with. There will always be an argument about who finds what equal but there are facts about individuals being denied equal rights – even in the present.

The Merriam-Webster dictionary defines feminism as the belief that men and women receive equal rights. Here’s the thing. It is quite evident that some people are not being treated equally. Regardless of what is actually happening in society, you will always find people that have their own opinions. That is fine. However, things such as differences between salaries shouldn’t be taken lightly. The topic of males earning more than females is nothing new. It is unfortunate that time and time again, we hear about men earning more than females in some professions. According to the Sydney Morning Herald, women in Australia worked up to 65 extra days to match male salaries. The publication mentioned that men earned $483.80 than women did. The gender pay gap in Canada isn’t great either. Female workers in Canada earned about $8,000 less than men in the same profession, according to The Globe and Mail. In addition, only 5.3 per cent of Canadian CEOs are female. A surprising statistic to come across when half of the Canadian labour force is made up of females. Some of the reasons behind the pay gap were maternity leaves and females working in jobs that didn’t lead to promotions.

There are some people that would look at these statistics and think nothing of it. It doesn’t take a genius to figure out that there is still inequality between genders. What do you think about when you read about issues such as these? Do you feel like something needs to change? Some people giggle at the mention of feminism, and others can turn into quite the protestor.

The word ‘feminism’ seems to have been misinterpreted by several people. Feminism describes both males and females that agree to equal rights for women. Most people think about feminism and imagine angry females who envy the stereotypes of what makes a man. Feminism is not supposed to be a word that should stereotype anyone. It is supposed to be a word that describes the zeal anyone can have towards females being treated with respect. Anyone that uses feminism to promote hatred or bitterness – really isn’t a feminist and does not understand the word.

Furthermore, there are issues that need to be resolved concerning women in Canada. Rabble published a post in August titled, “11 ways the Harper government has failed Canadian women.” Some of the most eye opening conversations in the article were: economic equality, violence against women, childcare costs and working conditions for female refugee workers. The post pointed out several problems that Canadian women have had to deal with, like, the lack of females in parliament and the 35 per cent of earnings that several female workers see going towards childcare. These are obvious problems that deserve as much attention as anything else.

When you look at feminism from a female perspective, there is a lot to consider and be concerned about. A lot of people scorn those that call themselves feminists because of its misinformed definition. Canadian leaders ought to make it a priority to eradicate these issues. On the other hand, we can all play our parts by recognizing that we are all equal – no matter our gender, identity, religion or class.