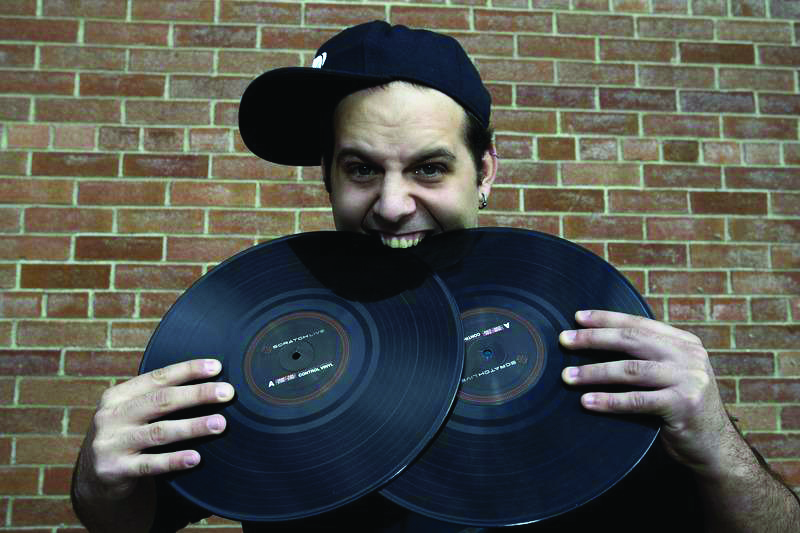 DJ Vekked is undoubtedly one of Canada’s most impressive DJs, holding the national DMC title three years in a row, and both the DMC World Supremacy title and the IDA World title for 2012. Vekked is a Laurier graduate and while he may not be putting his degree to “proper use” by some standards, the guy has a philosophy that can make anyone feel like the world is their oyster. Keep reading to find out all about the world’s best turntablist.

When did you start DJing? What made you want to become a DJ?

Everything to do with music, and my precursor to becoming a DJ, started when I was 12. Somehow I stumbled upon a music making program on the computer with a buddy of mine. We were making beats – like house beats and stuff – and that kind of got me interested in DJing. I started producing, and then I started getting more interested in hip-hop when I hit high school … before that I didn’t know really what hip-hop was or anything. So I started getting into hip-hop, and started learning the elements of hip-hop, and DJing is one of the core elements. I was no good at any of the other stuff like rapping and break-dancing, so I went with DJing. I got my first turntables when I was 17, just near the start of grade 12.

One of my biggest influences in becoming a turntablist, which is kind of my genre, [was when] I was looking for videos on LimeWire, because there was no YouTube when I started, and I found DJ Qbert. That was the first time I had seen someone scratching, [watching] videos of him from, like, 1995. When I saw how they were making the sounds I was hearing by like moving the records and stuff, that’s kind of what solidified my choice to become a scratch DJ.

We already know of some career highs, what have been your career lows?

There hasn’t been too many lows for a while, but probably my first battle that I ever entered. The first battle I ever saw was at Starlight in Waterloo, and that was the local DMC battle. And I went, I watched it, and it was a great time, but I was standing on the sidelines being like, “Oh, I can do that,” even though I had only been DJing for a year and clearly couldn’t do that. But everybody thinks that they can do it. Then the next year I entered the battle and it was the Waterloo regionals, at Starlight again. I remember I got on stage, and it was my first time on stage I think, in front of anybody actually scratching. I remember feeling like my hand was cement. I could barely move it because it was so tight, and I could barely move. When we were making routines, especially back then, we used actual records, so it’s not like now where you can use mp3s and you are completely unlimited to what sounds you can use. Before, you had to use stuff that was pressed on records and there were certain records that DJs would make specifically for competitions, and so they would have a bunch of sounds that were good for scratching and stuff. There was one sound that was really popular that year and a couple of other DJs used it before me. It was a sound clip from Scarface. So then I used that sound in my set, and I remember people just started booing and they were like, “Get off the stage biter,” and they were acting like I copied the other people. The crowd probably didn’t know that was a popular sound at the time and everybody was using it. But that was my first experience battling, getting booed. And I don’t even think I was old enough to get into the club at that time, so I had to get a special pass. But yeah, I was pretty devastated after that. It was a pretty rough first go.

What makes you pumped to make music, do you have a process?

My main process is just to do it as much as I can. There is stuff that gets me in the mood to make music and routines, but there’s nothing that is really reliable and always works. You can never predict when you’re going to be in the zone. My theory is just to do it and practice as much as I can, and then hope that it’s going to be that day where I come up with something brilliant. There’s some days where you practice the entire day, and it just feels like you’ve done nothing new. And the next day you come up with more in that day than you have in the past three months or something. You just never know. Hearing a song that I really like always helps a lot because I’m working with other people’s music. So music that resonates with me is usually really good motivation.

If you weren’t doing music now, what would you be doing?

I played poker semi-professionally for a few years before competitions started going well. That’s what let me buy a lot of my equipment, just doing a lot of poker, so that’s kind of a “plan B.” Poker wouldn’t be a replacement for music, but that’s probably what I’d be doing if I wasn’t doing this right now. But I feel like if for some reason I never got into music, I’d probably do boxing or something like that – some kind of solo competitive sport.

The entire reason I got into poker was because I had a 9-5 that was so draining and so monotonous. And it just made me so mad because all I wanted to do was DJ, and then I got home and wouldn’t want to make music. So I desperately wanted to do anything I could so I didn’t have to work a 9-5. So somehow, I got into playing poker. I figured if I could make enough playing poker I could make my own hours and do music, and somehow it actually worked out.

What did you go to university for?

What’s your most memorable gig?

Do you have a favourite artist?

My favourite artists are Public Enemy and Beastie Boys, because they both have really high energy hip-hop music. But also, both of them existed in a period of hip-hop where the technology was getting really good for making beats and music. Like before it was drum machines and stuff, and everything was really minimal, but then technology started getting good. And it was before copyright laws started kicking in and suing everybody, so theres a period where hip-hop was at it’s peak freedom in a way – they could sample anything they wanted and not deal with any legal repercussions.

Where do you see yourself in 20 years?

Hopefully I’m just making music full time. Hopefully I’ve got a lot of albums out, with enough security financially and otherwise that I can just  keep making music.

If you were an animal, what animal would you be?

I’d probably be an owl, I guess, because I rarely ever sleep at night. I’m always working at night.