A Canadian in Ireland

It’s been an interesting, busy and altogether too quick last two weeks. I’ve been in the middle of moving away from home, which is enough of a hassle when it’s an hour or two away. Me, I took it a couple steps further and moved away from my country and also my continent. I took an opportunity to go on a study exchange through Laurier International at a school in Ireland and through my time so far, I’ve experienced culture shock in a way I truly did not expect – in several ways, on several levels. 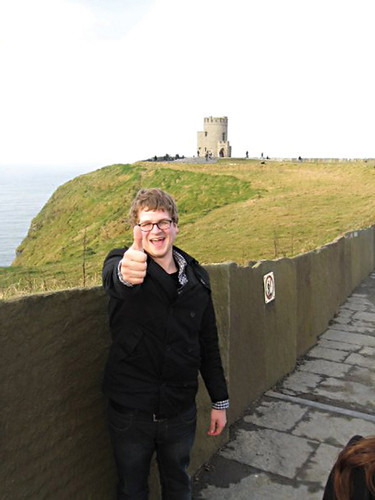 Obviously there is the initial shock at all of the differences of a new country and I think that form of culture shock is pretty normal across the board. One in particular that I haven’t been able to shake is absolute mortification at someone driving on the wrong side of the road. Accents are also a big initial shock. I live with five Irish boys and when they get to talking about rugby, football, class, or women, I get a little lost. Their terminology is new, their phrasing is new, and even small things like voice inflections are new. However, after two weeks, I’m already noticing these sort of little surface shocks about my “new normal” are wearing off: less and less am I fearing for my life when crossing the street, and I’m able to join in on most of the conversation of my Irish friends simply because I live and communicate with five fast-talking Irish guys back at our house. I expect that when I return to Canada, I’ll experience all this over again as I try to re-find my old normal.

The other kind of culture shock I’m facing is quite literally a more deep-set kind of shock that comes from the complete lifestyle change that is student life in Ireland. Back home, university life is hectic from the end of the first month to the end of the semester and in some cases there isn’t much of a break between. In Ireland, student life is very much focused around the end of the term, assessments are not at all ongoing and it’s really up to you to make the most of your studies which generally means cramming the week before exams. Another facet of this sort of shock is being identified first and foremost as an American. I’ve never had to deal with that and it’s pride mixed with frustration in my voice when I clarify that I’m a Canadian (“…from an hour outside of Toronto, not that you know what that means”).

It’s really the little things in Ireland that are both incredibly endearing but also incredibly shocking. To put it plainly, on a weekend trip to Dublin, I had a nine year-old girl tell me to “Fuck off” because I didn’t know where the Plaza Hotel was (I’m fairly sure its in New York but I wasn’t about to tell this nine year-old girl that). Afterwards she just walked off, arm-in-arm with her other two nine year-old friends at 10:30 at night in the middle of the country’s largest city. Brock, welcome to Ireland.