In late October, Kelan Herr and a couple of friends decided to celebrate finishing their first university midterm by having a good time in residence, Grand River Hall with a couple of cold beverages. Getting hungry, they decided to head out to Lonnie’s around 4 AM to grab a bite to eat. 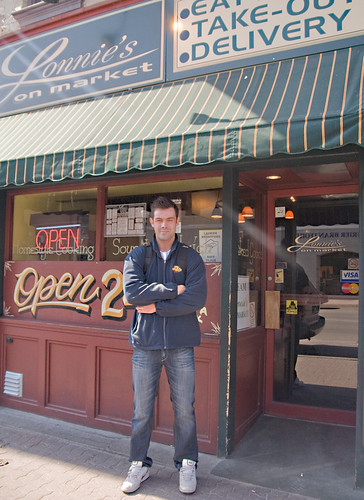 Walking into Lonnie’s, they ordered food to soak up the drinks they had throughout the evening. Everything was normal. A group of four teenagers were also in Lonnie’s at the time and tensions started to rise as chirping from both groups quickly progressed into throwing food at each other. Herr, his friend, Mitch Metzger, also a first year, and the other group decided to take the incident outside, where all hell broke loose in mere moments.

“I don’t remember anything after that,” said Herr, 21.

According to Herr’s friends that were there that evening, a 17-year old from Brantford fought with Herr, slamming his face into the Brant Stereo Autotronic building before kicking him in the head.

Herr was taken to Brantford General Hospital, where he stayed in an induced coma for two days before being moved to Victoria Hospital in London.

“I don’t really remember being in the Brantford Hospital or Victoria Hospital, it’s all black,” said Herr.

He was placed in the ICU Ward in London and prepped for surgery. Doctors took two and half hours to fix his broken nose, both orbital bones and broken nose. He also needed approximately 30 stitches in and out of his mouth. The doctors put a plate in his jaw, and two under the eyes which will always be there.

“I had to quit hockey because of this,” stated Herr, who had previously played for the London Knights and the Moncton Wildcats.

Herr and his friends are not the only Laurier Brantford students who have been subjected to violent attacks lately. Christopher Tanaka-Mann was also a victim of an assault in the downtown Brantford area, being attacked late on Halloween night last year. The incident took place on the walkway between Williams and Therapy Lounge. Tanaka-Mann stated that his attacker was intoxicated.

“Before the incident, I thought that there were a lot of strange folks who hang around the downtown core,” explains Tanaka-Mann, “but they never seemed like much of a threat. I still feel that way. The opportunity for offenders to do these sorts of things is rarely there.”

Willet and Tanaka-Mann recalled that the first officials to be on the scene were dons, followed closely by the Special Constable on service. Brantford Police and paramedics also attended.

Willet explained that she did feel “safe-ish” before the incident and that she didn’t think twice about the safety in Brantford.

“I thought it was just another small quiet town, but I am more aware of people now,” she says. “I don’t walk around anywhere alone – ever.”

As for Kelan Herr, he was back at school by December, feeling good.

“I thought it would be weird, I thought about going to a different school, but the school was very accommodating,” he said. “[But] I never will go back into Lonnie’s.”

Remembering the incident now, Herr seems to have moved past it for the most part.

“If they [the attackers] walked past me, I wouldn’t know who they were.”

Over the past year, several other assaults have occurred on and around campus: three students were attacked on the Brant Avenue bridge on Halloween night; in two separate incidents on the same night, three students were assaulted by two teenagers wielding a knife and a can of bear mace; and a Laurier-Nipissing student had her guitar destroyed in an attack by three men in broad daylight.

Many initiatives have been in place on campus to try to prevent other random acts of violence against students. Melissa Burke, WLUSU Executive Vice President of Brantford Operations has kept open communication with the Special Constables about the incidents. The campus has seen Foot Patrol increase volunteers as well as introduce new shifts – Monday to Thursday 7 PM – 1 AM and Friday to Sunday 7 PM – 11 PM.

“We have encouraged more red flag sweeps from Foot Patrollers,” says Burke. “Any red flag is sent to the Special Constables. Bacchus has also increased their alcohol awareness programs on responsible drinking.”

Burke stressed that WLUSU is open for ideas to better the safety and security of
students and around campus.

Dave Prang, Director of Student Services, has spoken to some of the students involved in the incidents. The feedback he received from the students was to increase the amount of visibility and related programs from the Special Constables. More lighting and cameras could be beneficial.

“More cameras are a useful tool for after an incident has occurred to track down something, as well as a deterrence,” he said.

Prang suggested the university is looking into the possibility of additional One Card swipe access as well as cameras.

“We want to be part of the solution.”

Kelan Herr says that the school didn’t put any blame on the students, but he was quick to admit his own fault in his incident.

“If I wasn’t drinking as much, it could have been a different outcome,” he says. “I didn’t make the best decision.”

Herr, whose attack was the first major assault of the school year, seems to have mostly recovered from his traumatic incident.

“It’s back to normal,” he says. “I feel safe in Brantford, it’s no different from any other town. It’s just too bad that there are a lot of people like that here.”