On the living room wall of Dan McCutcheon’s Darling Street apartment hangs a simple picture of a tree in a field, against a blue sky. The caption: “Change.” The picture, a hologram, changes depending on where you stand and how you look at it, showing the tree’s progression through the seasons.

McCutcheon, better known as “Dan, Dan the Mushroom Man” at the Brantford Farmer’s Market, has entered a new season of his life. For close to 12 years, he lived on the South Side of Colborne Street, but when the city took ownership of the buildings, he was forced to leave. He moved into Centennial Towers in December, to the fourth floor. The City paid for one month’s rent, and moving expenses. There have been some other incidental costs to moving, though. He still needs curtain rods for his living room window.

For the most part, he appears to be enjoying his new place, although he says that part of him wants to move back to South Colborne someday. He misses the feeling of the “passage of time” he got from watching annual events from his window. He knows people in the building, and most of the ones he meets seem friendly.

But even if he wasn’t enjoying his new place, according to one Toronto-based lawyer who works in expropriation cases, he likely wouldn’t have legal grounds to sue the City for making him leave before finalizing plans to demolish his former home. While businesses must have a plan when they expropriate buildings, according to this lawyer, municipalities do not.

All his furniture fit comfortably in the two-bedroom apartment, although he’s still considering how to use the utility closet. He may put an extra bed in there, or use it as an office. He plans to join “the computer age” sometime soon. He seems content. “Home is what you bring with you,” he says. 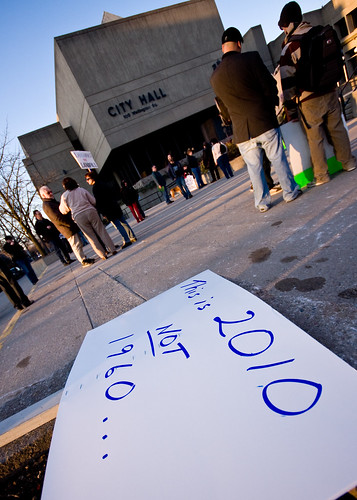 But while Dan McCutcheon was loading and unpacking boxes, a movement of discontent was taking place: a movement to save his former neighbourhood from demolition, mainly for heritage concerns. And there was perhaps no better symbol of the growing dissent than the March 8 protest organized by members of the “Save the South Side of Colborne Street” Facebook group. Some had signs, some had pets, others had children, and together they marched from the Royal Bank on the corner of Colborne and Icomm to City Hall.

The date was significant. The City had just hosted public workshops asking citizens what they wanted to see once the buildings were demolished, and after posting the results on the City’s website, would soon reveal the guiding design principles that had been determined. Some of the protestors (50 or 60 depending on reports, by the time the group made it to City Hall only a little more than 30 people were present), had attended the public workshops. Others came from out of town.

Protestors were concerned the City had not listened to their concerns and had decided to proceed with demolition without considering all the options. Reena Mallen attended with her daughter and her dog, both wearing signs. Mallen said the process “didn’t sit right” with her. “Apparently, the City can tear down 41 buildings easier than I can borrow a book from my work’s lending library,” she said.

For her, preservation is a family issue. “It’s more her issue than anyone’s,” she said, referring to her daughter. Her daughter’s sign read “Reduce, Reuse, Renovate,” while their dog’s board declared, “Brantford is going to the dogs.”
Protesters marched around City Hall, chanting “Save our Street!” and stood together chanting, “We want the truth!”

For many, truth has become the biggest casualty in the process of redeveloping the South Side of Colborne Street, a process that has shown conflicting desires and wants.

When the current City Council was formed in 2007, the south side of Colborne Street was determined to be its highest priority. A task force was formed, and discussions with the private sector began to explore business development on the stretch of land between Grand River Hall and Icomm Drive. But, according to Ward Five Councillor and Vice-Chair of the South Side of Colborne Street Task Force, John Bradford, developers didn’t follow through on their promises. The City had to do something else. They chose to expropriate, to take ownership of the property. On August 4, City Council approved expropriation. Later, demolition of the properties was approved. And then, later still, $1.38 million grant from the federal government was accepted to cover the costs of demolition.

As part of receiving the grant from the government, the City has had to complete environmental assessments. No funding has yet been received, and no date for demolition has been set. Despite the setbacks, City Councillors remained staunchly in favour of demolition. Councillor Bradford said the plan “will not fail,” while Councillor Mark Littell said it’s “not a question of ‘if’ but ‘when.’”
It all may have seemed cut and dry, but around January, things began to change. When they approved expropriation, the City entered into a non-binding memorandum of understanding with the YMCA. The public learned the YMCA did not receive provincial or federal funding for a recreational centre on the south side of Colborne Street. 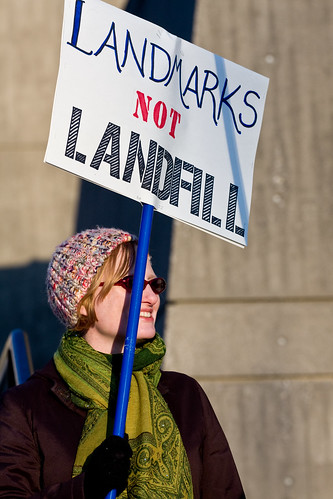 Then a report was found that stated not all the buildings were in deteriorated condition. Dr. Lisa Wood, an associate professor of English, Contemporary Studies and Child Education, and a Brantford resident, had been following the story’s progression through the local media. When she heard about the report that says only 14 of the properties were in fair or less than fair condition (only one property was listed as dilapidated, three were classified as poor, three others as very poor), she was “very upset.”

Wood decided the best way to generate support was to start the “Save the South Side of Colborne Street” Facebook group – a group that, at time of this writing, has 1645 members. The group, of which Wood is one of the administrators, generated discussion and raised the profile of the case. But for Wood, it caused some professional problems when she was called into Lesley Cooper’s office on February 12 regarding an email Wood had sent to the demolition company advising them of potential problems with the project. She had sent the email from her Laurier account, with her name and position automatically included on the bottom line.

The controversy surrounding Wood has died down now. When the story first broke, Dr. Wood avoided her office; now she has received “so much support” from her colleagues, both in Brantford and Waterloo. Dr. Sue Ferguson and Dr. James Cairns are organizing a roundtable on academic freedom for professors. As Ferguson explained, the event was not being planned because of the incident with Lisa Wood, but that that her experience made them realize now was a good time to consider the issues of academic freedom. Wood, along with David McNally, a political science professor at York University and Ferguson’s partner, will present, as well as Joyce Lorimer, the grievance coordinator for Wilfrid Laurier University Faculty Association.

Outside of Laurier Brantford, the debate continues. Christienne Uchiyama graduated from the Waterloo campus in 2004 and is now pursuing a Master’s degree at Carleton University. She works in the heritage field, and was planning on using Brantford as part of her thesis. On March 9, she wrote a letter to Laurier president Max Blouw, expressing her concerns about the University’s involvement in a project that would see heritage buildings demolished. While Uchiyama understands the University is not driving the demolition, she thinks a University with a large Archaeology undergraduate program “has a responsibility to look into adaptive reuse.” As of March 17, she had yet to receive any official response from the University.

Other reports indicate the buildings may not be as immune to rescue as previously thought. In 2008, the Brantford Heritage Committee prepared a report on the historical significance of the buildings. This report included references to past reports, noting that many problems have caused the stretch to deteriorate and revitalization needs to happen incrementally. The report cited a 2005 Fire Inspection that said the roofs were sound and the basements dry. Lloyd Alter, the President of the Architectural Conservancy of Ontario, a 75 year-old advocacy organization that fights to preserve historical buildings, said the condition of the buildings doesn’t negate their historical significance. He admits they all might not look pretty, although he finds some attractive. But he cautioned not all historical buildings have the appeal of a Carnegie Library: “People have to live, and people have to work somewhere.” Demolishing the stretch, he said is “tearing out the city’s heart.”

On March 22, the Heritage Committee presented a motion to City Council to designate the South Side of Colborne Street, along with Water Street and Wharfe Street as a heritage conservation district, similar to the blocks surrounding Victoria Park. According to Heritage Committee chair Jack Jackowetz such a designation would allow other uses for the buildings to be considered. “The buildings are worthy of consideration,” he said. After an hour’s debate, Council approve preparing a report about what such a district would be like – with South Colborne excluded.

But for many, the real issues driving the demolition are not heritage concerns or Laurier Brantford’s need for a recreational centre, or even community safety. Ward Three Councillor Greg Martin said he sees this issue as something politicians running for mayor can mention in their campaign literature. Martin, who believes it would be more financially prudent to see if any developers have interest in redeveloping the buildings, said the issue is “dividing council.” Even Bradford said that, if this wasn’t an election year in Brantford, Colborne wouldn’t be talked about as much as it has.

Dan McCutcheon’s neighbour for the almost twelve years he lived on Colborne Street was John Podiotis. Podiotis, who moved to Brantford from Greece in the 1950’s, had built a business downtown. The garden that he cultivated at the rear of his building facing Water Street was beloved by many. Podiotis was the last to leave South Colborne, and has relocated to apartments on Lynnwood Drive. He said he would tell me about the move at a Greek restaurant.

When we spoke on the phone earlier to set up the meeting, he still sounded distraught over the move. He said it had affected his health. He never made our meeting that day; when I called his home later, there was no response. We saved a chair for him. It remained empty.

And in the public discourse, perhaps the concerns of some former residents and businesses of Colborne Street remain unaddressed. Randy Coulter, the president of City Signs which operated out of 35 Colborne St. for 18 years, said that as of March 16 he hasn’t received any compensation for the over $10,000 spent in moving costs. He says business has been about the same. But he feels, as a businessman who contributed to the downtown and doesn’t disagree with the City’s intent to redevelop the area that he was shown “no respect.”
“It’s ridiculous,” he concludes.

And that may be all that can be said. As for Mark Littell, who has been the driving force behind expropriation and demolition, when asked what he’d say to those who had to vacate homes and businesses, he said he had nothing to say.